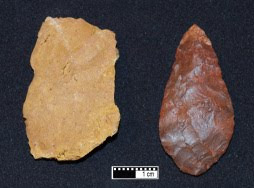 The antiquity of the use of fire by our hominid ancestors is truly astonishing and plausible evidence as quoted here is for 800,000 years. That is certainly ample enough to allow mankind to lose the robust jaw bones needed to rend meat of a bone and generally change out to modern dentition. That also allowed for the development of an enlarged brain case as part of a protracted juvenile phase.

The question of tool use was much trickier and had to surpass the obvious use of a stick and hand stone any primate might use. I had already surmised in my manuscript several years ago using scant evidence that the likely transition time was at least 70,000 years ago. Here we have specific confirmation that that was in fact true.

I also proposed a development niche that sped this development prior to this particular evolution of full tool use. That probably lasted for much of the preceding 100,000 or so years and both developed tool use and large social groupings, both unique to humanity.

Once this level of tool use and tool modification arose, then largely fully modern man spread out into every available valley and island on Earth. Some cut off populations still reflect that ancestry, but even they are fully modern humanity.

This aggressive socially organized hunting machine swept aside any competitors and dominated several niches and has also created many unique additional niches.

This clearly pins down the time of true emergence as around 75,000 years ago. The expanding population would have penetrated everywhere inside of a couple of thousands of years in the old world. We now know that this also likely include Australia.

The Americas were still much later but still plausibly as soon as 40,000 years ago and certainly no later than around 20,000 thousand years ago.


Fire pit and sand both used for heat treatment experiments. Silcrete is placed beneath a layer of sand and then a fire is built over the top. The temperature is gradually increased and then slowly decreased to avoid cracking the stone. Credit: © Science/AAAS

Experimentally replicated blade tools produced with heat treated silcrete. Some of these tools may have been mounted unto a wood handle to create a tool with disposable blades, as pictured above. Credit: © Science/AAAS

Early humans crossed a threshold around 75,000 years ago, when they started painting symbols, carving patterns and
making jewelry. A new study found they also began to use fire to make tools around that time.
Until now, this complex, multi-step process for tool making was only known to occur as recently as 25,000 years ago in Europe. But the new findings show this breakthrough occurred much earlier,
and in Africa, not Europe.
By heating up stones in a fire before chipping away at them to make blades, early humans could make tools sharper and produce them more efficiently.
Scientists think this advancement represents a link between the earlier use of
"Around 800,000 years ago we see some of the first evidence for hominid controlled use of fire," said study leader Kyle Brown, a graduate student in archaeology at the University of Cape Town in South Africa and at Arizona State University. "And then at about 10,000 years ago we see evidence for production of ceramics. And at about 5,000 years ago we see metal working."
"The heat treatment of tools is sort of a bridging technology," he said.
The development of this skill may represent a level of
Brown and colleagues discovered the remains of tools that had been made using fire at archaeological sites in South Africa. The tools were made out of a stone called silcrete. Some of the earliest examples could date back to 164,000 years ago, and the researchers found that by 72,000 years ago this technique was seemingly common for silcrete tools.
The heat-treated tools look almost like stone razor blades, and are small enough that they could have been set into a handle.
"It’s a big debate to figure out what people were doing with these things," Brown told LiveScience.
"Some people argue that they are the first arrowheads. Other people argue that they were set in a handle and used as knives."
To make the tools, early humans would have had to bury the stone beneath a fire, then slowly heat it up, keep it at a high temperature for hours, and then let it cool. The process was complicated and could take one to two days of continuous heating.
The heat transforms the stone so that it's harder and more brittle, which allows it to be more easily chipped away into a sharper edge. It also gives the stone a special sheen, which helped the archaeologists identify the tools as resulting from fire treatment.
"The most noticeable thing about heat-treated stone is that it has a luster or a gloss to it that’s fairly distinctive," Brown said. "A stone that's heated will only show that gloss if it's been flaked after it's heated."
The researchers then confirmed that the tools had been warmed in a fire with a technique called archaeomagnetics, which measures the realignment of iron particles in stone that results from heating. Another chemical process called thermoluminescence provided further proof that the stones had been heated.
Brown
Early modern humans use fire to engineer tools
asunews.asu.edu/20090813_ancienttoolmakers