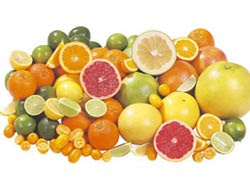 Everyone is allowed to get excited about this report presently circulating. It is still early days in terms of application and use, but this is hard evidence explaining why the so called grapefruit diet appeared to have positive effects on fat retention. If it all stands up and the active ingredient can be properly synthesized so that appropriate doses can be applied, then is a surety that we will all be having naringenin cocktails with our fat laden meals.
If this actually works in humans as well as it works in mice, we are looking at the abrupt end of metabolic disease. The product has been safe to use in the lower doses associated with fruit and it is not killing the mice. If we called it vitamin N, it would fly of the shelves.
It would also be nice to have a vitamin C appreciation worked up simultaneously with this new product. Combining naringenin with ascorbic acid in large doses would emulate the grapefruit scenario while achieving the optimal dose size and possibly making it easier to swallow.
Realistically, if you have belly fat with as mind of its own, you will want to jump on this as soon as we reach a general consensus. It is particularly promising because the ingredient is already been ingested safely, although is does disturb the uptake of some medications such as specific statins.
I got this item from Newsmax, but similar items are put there in the blogosphere and it is also obvious that many researchers have jumped on this as could be expected.
I should mention that the diet industry is jumping in with both feet and are hardly waiting for such silly things such as confirmation, or perhaps a reliable supply chain. So expect a few short months of applying the rule of buyer beware.

Grapefruit Diet Holds Key to Fighting Obesity
A substance in grapefruit could prove to be the key to fighting obesity and diabetes, according to a new Canadian study.
The substance, a flavonoid called “naringenin,” is a naturally occurring compound in all citrus fruit, but especially in grapefruit, giving it its characteristic bitter taste. Naringenin, in concentrations far above levels found naturally, makes the liver burn fat instead of storing it, according to a study by Roberts Research Institute at the University of Western Ontario.
The study used two groups of mice that were fed a typical Western high-fat diet, a diet known to induce symptoms of metabolic syndrome. One group’s diet, however, was treated with naringenin.
The researchers found that the naringenin corrected elevations in tryclycerides and cholesterol, prevented the onset of insulin resistance, and otherwise normalized the metabolism of insulin. Also, the naringenin completely reprogrammed the livers of the mice so that excess fat was burned rather than stored.
The “marked obesity that develops in these mice was completely prevented by naringenin," said study leader Murray Huff. "What was unique about the study was that the effects were independent of caloric intake, meaning the mice ate exactly the same amount of food and the same amount of fat. There was no suppression of appetite or decreased food intake, which are often the basis of strategies to reduce weight gain and its metabolic consequences.”
The famous grapefruit diet apparently headed in the right direction, but the levels of naringenin found in grapefruit were not high enough to produce the results obtained in the study. People wanting to try naringenin for obesity and diabetes benefits will have to wait until a concentrated supplement is developed.
The study team is trying to develop a naringenin treatment for humans
Posted by arclein at 12:09 AM

I bet they are - patenting it might be another trick however.