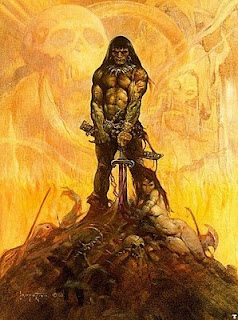 As I have made clear in my postings, the ice age polar ice cap needed to be centered on the pole as much as possible to minimize growing imbalance in the crust. We have already dealt with the real slipperiness of the crust itself and shown that this objection is no objection at all.

We have asserted that humanity chose to trigger a crustal movement about 12900 BP in order to position the crust in such a way as to induce the full effect of the Gulf Stream and usher in the Holocene. This was clearly a precisely targeted event induced by a Comet strike on the pole itself. It is literally too good to be true if it was not planned deliberately.

However, it appears that a similar crustal movement occurred coincident with the peak of the ice age at around 19,000 BP that was a natural outcome of the building imbalance of the crust and though a random event, it did begin the process of deglaciation itself, but not nearly so effectively as the 12,900 BP event which completed the job in a couple of millennia.

The best evidence for this occurring is simply the fact that the second event was planned at all. You would only try that if you knew it would work.

A little bit of Pleistocene geography now needs to be reconstructed. Firstly, the temperate zone was the home of our known Pleistocene menagerie of mammoths, bison, mega lions, huge bears and of course humanity. Because it was in the temperate belt a long growing season was available. However it was all dominated by glacial weather that kept temperature variation changing over several degrees making agriculture very difficult and unlikely.

In Eurasia, this zone was most of two thousand kilometers wide and several thousand kilometers long. It was well watered and replete with ample plant fodder to support the massive herds. There were also ample semi protected valleys in which humanity could commence pastoralism and perhaps even some garden plot agriculture. The human population was likely huge because of the ease of big game hunting.

Secondly, the Indian sub continent was positioned on the equator and had a climate similar to the Amazon, Indonesia and the Congo. Human populations would have been organized as hunter gatherers as common in these regions. Successful agriculture has only occurred on tropical soils with the advent of terra preta in the Amazon five thousand years ago and more recently with some application of modern capital intensive methods.

That made it unattractive to northern hunting cultures that could migrate easily from Central Asia.

We can also surmise from the forgoing that these populations had ample prewarning of the coming impact event of 12,900 BP and were able to properly shelter themselves from the atmospheric shock waves.

Pleistocene Central Asia in particular was thirty degrees in latitude further south and obviously a much moister environment that was rich in food and fodder for the Pleistocene menagerie. It was certainly well populated with human hunters to a density comparable to such societies in Africa. Thus we have a dominant Central Asian culture with a southern tropical perimeter not unlike the surrounds of the Congo and the Amazon. They had plausibly already domesticated cattle to stabilize their lifeway and liberate themselves from following the wild herds were all the predators were.

My point is that the Northern Pleistocene was far richer and dominant than we have ever imagined and once understood in that light the later emergence of derivative populations becomes understandable. This huge areal expanse interacted with a likely host of local tribal groupings on the perimeter that to day are still recognizable as Europeans, Aryans and Chinese with all gradations in between.

The claim in the Vedas that the Indian populations and culture arose from an influx from the ‘Arctic’ and environs then is clearly explained. That influx was ongoing long before the 12,900 BP event, but lacked the necessary large herds to support hunting unless they brought cattle with them. If they brought cattle herds then they would have established large populations early on just as we are doing so in the Amazon today.

The crustal shift northward changed all that into the present climate regime and effectively forced populations out of their old hunting grounds as they dried out. They would naturally have gone south to join their kinsmen.

We have always been assuming geographical association with specific characteristics. The littoral of central Asia was rich and well connected for the mixing of a wide range of characteristics to be able to accommodate all of this in a population that was notably brown skinned but also highly variable.

Thus we can make a first basic generalization about the pre agricultural human populations. There were two obvious lifeways. The one was centered in tropical conditions, of which a modern day example is Papua - New Guinea. Their lifeway engaged in local gardening and small game hunting and inter tribal predatory warfare.

The second dominant lifeway was the temperate big game hunting society with a plausible application of pastoralism. We have images of Conan confronting these monsters with a spear in hand. Somehow, that never happened. Stampeding such an animal over a cliff is much safer or crowding it into a sealable box canyon, or as in Africa, simply dig a really good pit fall. You still need the big spear, but you will not be endangering yourself.

Converting the meat into strips for drying and producing pemmican was surely the principle method of using all such meat. Most of it was tough and needing prolonged stewing otherwise. Obviously a single mammoth would provide many thousands of pounds of fresh meat which could be dried and preserved in fat after pulverizing to produce thousands of individual daily rations. It is realistic to expect a single mammoth to provide a year’s rations for a single hunting band totaling up to twenty members. Pretty good return on a month’s effort.

That also explains the general economy of the plains Indians who maintained buffalo jumps. Once the preserved meat was in place, all other hunting was a pleasant pastime.

Thus we find that the post 12,900 BP world became difficult for the northern populations at the same time that the southern perimeter dried out and became more amenable to the lifeways of pastoralists. Of course they migrated bringing a more productive lifeway with them.
Posted by arclein at 10:51 AM