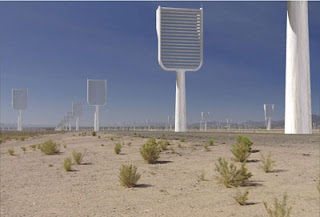 Somehow this one is a bit difficult to choke down. The startling item is that so much CO2 can be collected. It does not promise to convert it into something g conv3enien so we are still left with a disposal problem. Not a solution that competes with biocharing crop residue and plowing it into the field.
We are given too little technical information here to devel0ope any comfort regarding method. So we cannot comment much.

This article also chatters about algae and paint jobs, so it is clear that the reporter is new to the subject also.
Therefore we better wait for a more detailed story that is not a recycled press release. At the end of the day, we want the CO2 been used.
Long before a strategy like this is adopted; a strategy of simply planting trees will be long implemented not so much for the substantial CO2 locked up but for all the additional benefits provided.


How planting forests of fake trees across Britain could fight global warming
By
Daily Mail Reporter
http://www.dailymail.co.uk/sciencetech/article-1209358/How-forests-fake-trees-Britain-fight-global-warming.html
Last updated at 12:27 PM on 27th August 2009
Forests of artificial 'trees' should be planted across Britain to soak up carbon dioxide from the atmosphere, according to a report into climate change.
Engineers claim 100,000 of the devices which would be two-thirds as tall as a wind turbine - would remove the carbon emissions of every car, lorry and bus in Britain.
The call comes in a study by the Institution of Mechanical Engineers into how technology could prevent climate change. It says using technology to remove CO2 from the atmosphere could buy the world vital time.
The future? The artificial trees pictured in between the giant wind turbines would help soak up carbon dioxide
The institution says a single synthetic tree costing £15,000 could capture ten tons of carbon dioxide from the air every day, making it thousands of times more efficient at absorbing CO2 than a real tree.
The trees would be coated with synthetic materials that absorb CO2, which would then be removed and stored underground in depleted oil and natural gas reservoirs. The institution wants millions of pounds to be invested in research on technology to beat the threat of global warming to Britain.
The study also calls for buildings to be lined with pots of algae that absorb CO2 from the atmosphere. The algae could then be used as green biofuels for cars.
Painting buildings white can also help reduce the amount of solar radiation absorbed by the Earth, keeping it cool.
The report says attempts to prevent global temperatures rising are doomed, predicting they could increase as much as 6c by 2100, creating food and water shortages, sea level rises and massive refugee crises.
Author Dr Tim Fox said: 'Geo-engineering may give us those extra few years of transition to a low- carbon world and prevent any one of the future climatechange scenarios we all fear.'
Read more:
http://www.dailymail.co.uk/sciencetech/article-1209358/How-forests-fake-trees-Britain-fight-global-warming.html#ixzz0Pc9DnHP4
Posted by arclein at 12:04 AM