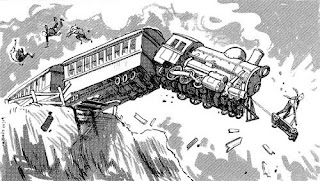 Of course Marc Morano has been the center of dispensing information contrary to the pro global warming material. We have not had a public debate so much as a battle of the apologists.
Again, for the record, the northern hemisphere warmed up quite nicely for a decade or two until 1998. At that point as should be obvious, the northern hemisphere was warm. The sea ice had already been reduced by sixty percent by the warming process. This melt continued for the past ten years because conditions were warmer but also stable. The sea ice is now much further reduced and could easily be eliminated by another cycle of warming or even maintenance of the past decade’s warmth.
Instead, we presently have dropped a degree or so in apparent temperature. Thus it is also plausible that the sea ice is presently on neutral and may swing lower to induce the regrowth of sea ice.
What is completely convincing is the proposition that the climate is been managed with zero regard to the amount of CO2 we dump into the atmosphere. I am using the word zero here because most people seem to have difficulty with approximate, or negligible. To put it as clearly as possible, I do not need haul in CO2 as a cause to explain anything, particularly now when the climate is showing itself to be a hugely independent variable.
After all, if the coincidence of a decadal temperature rise is to be successfully associated with rising CO2 until 1998, how do we explain the effect of twice as much CO2 dumped into the atmosphere since? The warming effect must be much greater! If we accept their simple minded arithmetic, then the only explanation is that we have just staved of a little ice age. We are certainly heading there in terms of logical consistency,
When I started this blog, I began by clearly delinking the two phenomena. I said at the time that such linkage was both weak science and likely to damage the important cause of CO2 management. Such management leads directly to a program of terraforming the Earth. The only problem with that, is that the natural supporters are so called environmentalists who are so biased that they can not do any thing constructive. That leaves the rest of us to push at small beginnings.

Brenda Ekwurzel of the environmental group Union of Concerned Scientists, is discouraging the idea of a trial. This is the same Ekwurzel who claimed global warming made it “less cool” this summer. See: Climate Fear Promoters Try to Spin Record Cold and Snow: 'Global warming made it less cool' – July 27, 2009
More significantly, it is the same Ekwurzel who badly lost a public debate over man-made climate fears in 2007. See:
Scientific Smackdown: Skeptics Voted The Clear Winners Against Global Warming Believers in Heated NYC Debate – March 16, 2007 & see: Climate Fear Promoters Avoid Debates and Lose When They Engage in Them)

No wonder the U.S. Chamber of Commerce has called for a full trial on global warming claims. Desperation time has arrived for the promoters of man-made global warming fears, as the science of man-made climate fears continues to collapse.

In 2009, a series of inconvenient developments for the promoters of man-made global warming fears continue unabated.

A small sampling of developments include: new peer-reviewed studies, real world data, a growing chorus of scientists dissenting (including more UN IPCC scientists), open revolts in scientific societies, more evidence that rising CO2 is a boon for the atmosphere, and the Earth's failure to warm.
In addition,
public opinion continues to turn against climate fear promotion and even activists at green festivals are now expressing doubts over man-made climate fears and a Nobel Prize-winning economist is wishing for 'tornadoes' and 'a lot of horrid things' to convince Americans of a climate threat.

There has been no significant global warming since 1995, no warming since 1998 and global cooling for the past few years. Lack of warming for past decade and recent global cooling, follow a peer-reviewed analysis showing the 20th century was not unusually warm. In addition, a global temperature analysis on April 24, 2009 found "No continents have set a record high temperature since 1974."

The news is so grim for man-made climate fear activists that they are already looking for the next environmental scare to hype! See: AGW RIP? Is It Time for Next Eco-Scare Already? Gore's producer Laure David touts plastic crisis: 'Plastic waste is in some ways more alarming for us humans than global warming' - July 31, 2009 & UK Green Party: 'There exists a more serious crisis than the 'CO2 crisis': the oxygen levels are dropping and the human activity has decreased them by 1/3 or ½'

The environmental activists who are choosing to ride out the unfounded CO2 scare are getting more and more comical and shrill.

Climate campaigner Adam D. Sacks declared in Grist Magazine on August 24, 2009: “We must leave behind 10,000 years of civilization” to deal with global warming."

In addition, the following recent developments further challenged the “consensus” of global warming.

In April 2009, the Polish National Academy of Science “published a document that expresses skepticism over the concept of man-made global warming.”

In 2008, a canvass of more than 51,000 Canadian Earth scientists revealed 68% disagree that global warming science is “settled”, with only 26% of the scientists attributing global warming to “human activity like burning fossil fuels.”

A Japan Geoscience Union symposium survey in 2008 reportedly “showed 90 per cent of the participants do not believe the IPCC report.”

Scientific meetings are now being dominated by a growing number of skeptical scientists. The prestigious International Geological Congress, dubbed the geologists' equivalent of the Olympic Games, was held in Norway in August 2008 and prominently featured the voices of scientists skeptical of man-made global warming fears. [See: Skeptical scientists overwhelm conference: '2/3 of presenters and question-askers were hostile to, even dismissive of, the UN IPCC' & see full reports here & here ]

In addition, there has been failure of the oceans to warm, and Antarctic ice continues to grow. Even the poster child of the warming fear campaign, the Arctic is not cooperating . (See: April 'Arctic sea ice extent within expected range of natural variability' -- ice grew by 'more than the size of Texas over last two years' & UK Met Office: Arctic Ice Changes 'Could Easily be Due to Natural Fluctuations in the Weather' & 'These are good times to be a climate skeptic' - 'Global sea ice extent presently above long-term average' )

New Zealand Climate Scientist Chris de Freitas revealed on May 1, 2009 that "warming and CO2 are not well correlated." de Freitas added, "the effect of CO2 on global temperature is already close to its maximum. Adding more has an ever decreasing effect."

Australian Geologist Dr. Ian Plimer wrote on August 8, 2009: "At present, the Earth's atmosphere is starved of CO2...One big volcanic eruption can add as much CO2 in a day as humans do in a year."

A growing number of scientists challenge the premise of CO2 driving climate change. Professor Dr. Doug L. Hoffman, mathematician, computer programmer and engineer, wrote on August 24, 2009: "There have been ice ages when the levels of Co2 in Earth's atmosphere have been many times higher than today's." Hoffman, who worked on environmental models and conducted research in molecular dynamics, co-authored the 2009 book, The Resilient Earth.

'Climate change issue is about to fall apart'

Many scientists are now realizing that the UN IPCC and the promoters of man-made climate fear are in a “panic” about the lack of global warming, the growing number of scientific defectors and sinking public support. South African UN Scientist Dr. Will Alexander wrote in March 2009, “'The whole climate change issue is about to fall apart...Heads will roll!”

UK scientist Dr. David Bellamy once believed man-made climate fears, but has since reversed his views and become a skeptic. “The ­science has, quite simply, gone awry. In fact, it's not even science any more, it's anti-science, Bellamy said in November 2008.

It is no wonder that the environmental movement is urging its troops to no longer use the term “global warming,” as temperatures fail to cooperate. (See: NYT obtains enviro strategy memo: Stop use of term global warming! ) The man-made climate fear promotion movement has descended into “climate astrology.”
Skeptical scientists generally rally around several key points. 1) The Earth is
currently well within natural climate variability. 2) Almost all climate fear is generated by unproven computer model predictions, which even the UN concedes do not account for half the variability in nature and thus are unreliable. 3) An abundance of peer-reviewed studies continue to debunk rising CO2 fears and, 4) "Consensus" has been manufactured for political, not scientific purposes.

Since real world observations are not supporting the alleged climate catastrophe, climate fear promoters are instead touting unverified computer models predicting doom 50 or 100 years from now. But even the UN admits the models are flawed and do not account for “half the variability in the climate” and they are instead referred to as “story lines” not even “predictions.” (See: IPCC lead author Trenberth, refers climate models as “story lines.” ) In addition, top forecasting experts say the models violate the basic principles of forecasting. (See: Ivy League forecasting pioneer “Of 89 principles [of forecasting], the UN IPCC violated 72.” )

finally the facts may come to light. let's hope it's in time. I'm all for getting the chemical pollution from industry which no one knows the potential of the mixing effects of these poisons on humans and nature. time to focus on the real problems not the propagandized problems.

I heartily agree that pollution is a serious problem that has been allowed to fester. The only proper universal solution is to arrange a universal standard setting commission mandated to establish and enforce protocols.

cheating will still occur but it can be driven to a low enough level that it may be acceptable.

We have solutions for ninety nine percent of all serious polution problems, but they must be universaly imposed or it will always end up in the hands of the lowest bidderwho cuts corners one way or the other. Most third world countries have learned the lesson of collapsing schools.