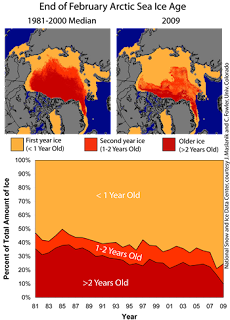 Winds have abruptly cleared a lot of the western ice away and sharply reduced the areal extent of the sea ice. I do not know now it stacks up against the past two years but the lateness of the winds has surely allowed for more areal extent than normally expected.

We also get a sense that the thickness is continuing to decline strongly. Therefore if no reversal is experienced or even a substantial slowing of the thickness loss, we are on the way to sea ice dramatics in a couple of years.

A combination of essentially one season ice throughout and a return of 2007 wind conditions would possibly even clear the ice pack out of the Arctic.

This year those same lack of winds kept the Northwest Passage blocked off and have also kept the Northeast Passage closed. Both needed just a bit of luck to be open though. The swift recent clearing of the Bering sea shows that.

One thing that I would like to point out is that the ice is pulling way back from the Russian coast pretty consistently, so while a clear passage is not conveniently available, it is possible for smaller prepared vessels to approach the edge of the ice almost everywhere and to be in position to force their way through the area blocking the Northeast Passage with a slight break in the winds.

Again the map is at:

And the graphic chart pretty well tells us that the three year ice is now effectively gone. From now on our sea ice will consist of one and two year ice rotating through the Arctic Gyre. This should grind down to a region of consistent two year ice with a generally smaller region of coverage that will be stable.

We may not get total removal of the ice in any given year but we will also not have any three year ice.

It may also turn out that minimum ice cover looks largely like this. Strong winds may concentrate the ice in a smaller area but do little to the annual coverage produced by the winter freeze.
Posted by arclein at 12:12 AM