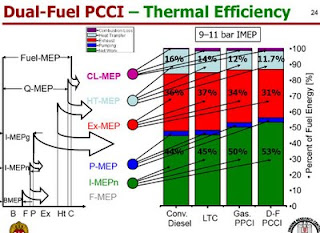 This is a quick over view of efforts to squeeze more usable power from our fuels. Blending under computerized control is a plausible option that can add significantly.

With the looming advent of ultra capacitors on the market, this may not seem to be nearly as critical. However, they are not as attractive initially for hauling tonnage. In reality, our super batteries will make much of their gains by removing a lot of unnecessary weight from personal transportation. We are trying to produce a five hundred pound device able to move five hundred pounds of payload three hundred miles. More likely it will still be a thousand pound device, but it is a lot closer than anything else tried.

Mass transport is all about payload and a fuel based system is likely to remain a huge factor in the market for decades because of the comparative energy efficiency of the fuel. It is moving perhaps fifty tons of payload a lot further than three hundred miles and the vehicle weight is likely an additional twenty percent. What is also true is that present fuels can be readily replaced by biodiesels and ethanol from agricultural sources without disturbing the food supply while helping to remove product streams to a higher end use.

Displacement of part of this market onto air pad rail transport and point to point airship mass transport are two technologies able to reduce fuel demand, but will only do so by displacing market expansion over time unless costs changed dramatically which seems unlikely. Both these technologies are initially going to pick of high volume dedicated long haul transport problems. Short haul for airship transport seems less likely until end point handling becomes somehow efficient in a strong wind.

This clearly shows us the coming battle field for market share in the business of mass transport. Air ship transport may surprise us totally when it comes to final operating costs because there is obviously a market for thousands of such craft at the one, two, four, six and eight container capacity airship design.

The lack of aerodynamics around the containers may be easily overcome by creating a belly slot for the containers to be drawn up into. Thus speeds of seventy mile per hour are readily viable and fifty percent more within design reach.

If an airship is able to go head to head on costs with long haul trucking, it will swiftly displace that market because of the gentle handling that can be provided.

Anyway, computer assisted combustion dynamics will bring significant fuel efficiency to the long haul business and that is necessary for the above rising competition.

Green bars are the engine efficiency. Conventional diesel on the left is 44% and the best gas-diesel mix would be 53% efficient. Less heat transfer and exhaust thermal losses.What if an engine could be programmed to harvest the best properties of both diesel and gasoline fuel sources at once, on the fly, by blending the fuels within the combustion chamber? Based on tests by the University of Wisconsin-Madison engine research group would be a diesel engine that produces significantly lower pollutant emissions than conventional engines, with an average of 20 percent greater fuel efficiency as well. These dramatic results came from a novel technique Reitz describes as "fast-response fuel blending," in which an engine's fuel injection is programmed to produce the optimal gasoline-diesel mix based on real-time operating conditions.

Under heavy-load operating conditions for a diesel truck, the fuel mix in Reitz' fueling strategy might be as high as 85 percent gasoline to 15 percent diesel; under lighter loads, the percentage of diesel would increase to a roughly 50-50 mix. Normally this type of blend wouldn't ignite in a diesel engine, because gasoline is less reactive than diesel and burns less easily. But in Reitz' strategy, just the right amount of diesel fuel injections provide the kick-start for ignition.

Reitz estimates that if all cars and trucks were to achieve the efficiency levels demonstrated in the project, it could lead to a reduction in transportation-based U.S. oil consumption by one-third.

The engine operates at much lower combustion temperatures because of the improved control — as much as 40 percent lower than conventional engines — which leads to far less energy loss from the engine through heat transfer. Second, the customized fuel preparation controls the chemistry for optimal combustion. That translates into less unburned fuel energy lost in the exhaust, and also fewer pollutant emissions being produced by the combustion process.

The United States consumes about 21 million barrels of oil per day, about 65 percent (13.5 million barrels) of which is used in transportation. If this new blended fuel process could convert both diesel and gasoline engines to 53 percent thermal efficiency from current levels, the nation could reduce oil consumption by 4 million barrels per day, or one-third of all oil destined for
PCCI - Premixed Charge Compression Ignition
PCCI patent

PCCI operation at 6, 9, and 11 bar net IMEP was achieved with near zero NOx and soot and a reasonable PRR

2.
Use of Supercritical Diesel Fuel for Improved Efficiency and Reduced Emissions Researchers at Syracuse University (New York) have developed a method to prepare, inject and combust supercritical (SC) diesel fuel.

The Syracuse team expects that the implementation of their concept—which is patented—will enable:

Near complete combustion of diesel fuel and recovery of up to 50% of the exhaust heat;

elimination of ~80% of criteria pollutants and a significant reduction of the air thermal impact;

downsizing (smaller combustion chambers for the same torque and power);

minimizing the parasitic pumping of large excess air; and the elimination of after-treatment systems
Posted by arclein at 12:03 AM