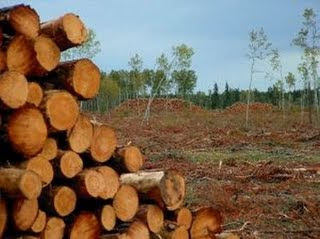 This is a welcome bit of information to act as an anecdote to the more hysterical reports of past years. In a way it is unsurprising. Central governments need their tax revenue and illegal cutting is all about operating out of government oversight and taxation. Obviously, if the local government cannot collect taxes on these logs and new fields, then there is slim chance they can hope to regulate the practice.
Thus the economic necessity of central governments is doing what all the laws and police can never quite do.
Slash and burn will continue until the farmers are encouraged to adopt biochar and are given homestead rights on that basis. At which point it will disappear in a hurry.
It was my lot to once visit a site in the jungles of Borneo a couple of decades ago. It was situated on a small river with a good flow a few miles inland. I saw a steady stream of logs tied up in small booms of perhaps several logs each with a logger riding each boom down to the sea. In the river mouth, there was a tramp ship collecting these logs and loading them. At best the local constabulary had speed boats thirty miles away and easier fish to fry. I got the distinct impression that no one asked too many questions.
I am sure today that the mill exists and that the tramp is no longer collecting logs and who ever comes down that river may even be paying taxes.

http://www.reuters.com/article/latestCrisis/idUSN2165866
By Stuart Grudgings
RIO DE JANEIRO, Aug 21 (Reuters) - The amount of carbon emissions caused by world forest destruction is likely far less than the 20 percent figure being widely used before global climate talks in December, said the head of the Brazilian institute that measures Amazon deforestation.
Gilberto Camara, the director of Brazil's respected National Institute for Space Research, said the 20 percent tally was based on poor science but that rich countries had no interest in questioning it because the number put more pressure on developing countries to stem greenhouse gases.
"I'm not in favor of conspiracy theories," Camara told Reuters in a telephone interview on Friday.
"But I should only state that the two people who like these figures are developed nations, who would like to overstress the contribution of developing nations to global carbon, and of course environmentalists."
A lower estimate for carbon emissions from deforestation would have an impact on the Copenhagen talks, where preserving forests is a top item on the agenda.
The summit will negotiate a follow-up to the Kyoto climate change treaty that could introduce forest credit trade to cut developing nation deforestation.
Camara, who stressed that he thought Brazil's deforestation rates remain too high, said recent calculations by his institute using detailed satellite data showed clearing of the world's biggest forest accounted for about 2.5 percent of annual global carbon emissions.
Given that the Amazon accounts for about a quarter of deforestation globally, a figure of about 10 percent for total emissions caused by forest destruction is likely to be more accurate, Camara said.
The 20 percent figure used by the Intergovernmental Panel on Climate Change was based on calculations from sampling of forests by the United Nations Food and Agriculture Organization (FAO), he said.
The FAO method came up with an average annual figure of 31,000 sq km (12,000 sq miles) deforested in the Amazon from 2000-2005. But Brazil's method of using satellite images to measure deforestation "pixel by pixel" was far more accurate and showed a figure of 21,500 sq km for the period, Camara said.
DEFORESTATION HEADING LOWER
For 2005-2009, the FAO estimate was double the correct figure, Camara said.
"The FAO grossly overestimated deforestation in Brazil and there are papers that show that such overestimation is also true for many other countries, including of course Indonesia."
Indonesia is among the world's biggest deforesters.
Camara said he was skeptical of any deal involving Brazil being rewarded for "avoided deforestation" because the average rate of destruction remained far too high.
"Deforestation in 2004 was 27,000 sq km and let's say in 2009 it is 10,000 sq km. It is not fair to say that we avoided 17,000 sq km of deforestation in as much as our current level is still too much, and 90 percent of that is illegal," he said.
"The concept of avoided deforestation is a weak concept. It would not stand up to scrutiny."Deforestation of the Amazon, which makes Brazil one of the biggest global carbon emitters, is on course to fall sharply in the August-to-July annual period in which it is measured.
Satellite data shows that new, large deforested areas are about half the area they were in the previous year, when total deforestation was 12,000 sq km.
"We are hopeful that deforestation will go down. In areas where deforestation had been high in previous years, like Mato Grosso and Rondonia state, it is relatively under control," Camara said.
The government has taken steps to crack down on illegal deforestation over the past year. Falling deforestation may also be due to the fall in commodity prices over the past year, reducing the incentive for farmers and ranchers to clear land. (Editing by John O'Callaghan)
Posted by arclein at 12:17 AM