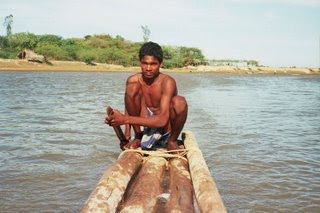 The Indo negroid populations of southern India is racially derived from Africa and as Prithvi shows in his book ’19.000 years of world history’ their language is also a derivative of the associated African language group. In fact it has been accepted that the association is inescapable but until now, there was lacking a convincing explanation as to how this might have come about in the deep antiquity necessary to support this theory and the remarkable depth of miscegenation of these communities.

Our inspection of the extent of the Maldives island chain and the subsea coral island arc associated with Madagascar dispels these concerns. Populations from the mainland of Africa, who were not dominantly Bantu 12,000 years ago, plausibly crossed open seas of a couple of hundred miles to reach Madagascar and penetrated the now sunken Madagascar island arc. This arc is presently a wide coral structure that is fifty miles across or more for most of its length and is itself the length of Madagascar.

Two things are proven here. These populations had the capacity to go to sea and travel a couple of hundred miles, not unlike the Stone Age Indian populations of the North West of the Americas. This allowed them to occupy Madagascar and what we can call the Madagascar archipelago.

The second thing demonstrated is that the maximum distance between the two archipelagos in the Pleistocene was around 500 miles. This was possibly a challenge for traffic moving eastward but certainly not impossible and certainly a survivable accident in the face of trade winds blowing you home.

The attached item makes clear though that present populations are derived from Borneo and Africa in equal numbers. This loudly suggests that the Indonesian sailors arrived by island hopping and then provided transport for mainland populations. However, our evidence so far makes this all fairly recent although once again I caution that no one is digging deep yet.

It is certainly possible for canoe based sailors to have traveled along the coast of the Bay of Bengal and reach Sri Lanka and then follow the Maldives island arc to its southern end before striking out for the five hundred mile trip to Madagascar and onto the African coast. And I think that seasonal wind shifts made the return trip quite possible also. The difficult part would be getting back to the Maldives archipelago

In fact, the presence of a fifty percent Indonesian stock in Madagascar strongly supports just that happening over the past four millennia at least. Earlier populations would not have maintained a significant population density and would have been readily absorbed by a technically superior population able to expand by agriculture.

I also note that these populations likely were dependent on the fishery and maintained a close proximity to the sea which may explain the lack of early evidence.

We can conclude that prior to the Pleistocene nonconformity lower sea levels opened up a southern sea route navigable with limited equipment equivalent to inshore fishing boats that ran between Indonesia, India and on to Africa. So though such a far flung ocean littoral is apparently impractical today, it was not then and it explains the advent of Indo Negroid populations in India. That it reemerged later with the advent of superior shipping is not surprising since folk histories would have kept it alive.

Again, the error of not pushing back dates aggressively is been made. It takes a long time to populate a region such as Madagascar and Southern India and any evidence acquired is just that of the population reaching optimum. Recall almost all evidence of the occupation of the USA would naturally be dated from the twentieth century with a bit from the nineteenth century. The earlier episodes would be largely missing.

Thus existing evidence in Madagascar from four thousand years ago is actually evidence of human presence preceding that evidence by thousands of years. The extant evidence likely reflects the emergence of bantu agricultural practice overlaying a hunter gatherer society.

One other comment needs to be made. These trips were often one way and were conducted primarily by men. These inevitably took on local wives and immediately created a natural fifty - fifty hybrid that has remained extant to this day in both Madagascar and plausibly in Southern India. We are more used to miscegenation been a minor part of the colonizing process while in this case it was the whole story.

In any case, the possibilities for population mixing along the Indian Ocean littoral was far more practical before the full impact of post Pleistocene flooding was felt and clearly happened from the genetic record. Alternative attempts to explain racial signatures via transmigration through the Middle East are outright implausible.

Studies prove people of Madagascar came from Borneo and Africa

July 8, 2005
http://news.mongabay.com/2005/0708-wildmadagascar.html
Studies released earlier this year found the people of Madagascar have origins in Borneo and East Africa.
Half of the genetic lineages of human inhabitants of Madagascar come from 4500 miles away in Borneo, while the other half derive from East Africa, according to a study published in May by a UK team.

The island of Madagascar, the largest in the Indian Ocean, lies some 250 miles (400 km) from Africa and 4000 miles (6400 km) from Indonesia. Its isolation means that most of its mammals, half of its birds, and most of its plants exist nowhere else on earth. The new findings, published in the American Journal of Human Genetics, show that the human inhabitants of Madagascar are similarly unique - amazingly, half of their genetic lineages derive from settlers from the region of Borneo, with the other half from East Africa. Archaeological evidence suggests that this settlement was as recent as 1500 years ago - about the time the Saxons invaded Britain.
"The origins of the language spoken in Madagascar, Malagasy, suggested Indonesian connections, because its closest relative is the Maanyan language, spoken in southern Borneo," said Dr Matthew Hurles, of the Wellcome Trust Sanger Institute. "For the first time, we have been able to assign every genetic lineage in the Malagasy population to a likely geographic origin with a high degree of confidence."
"Malagasy peoples are a roughly 50:50 mix of two ancestral groups: Indonesians and East Africans. It is important to realise that these lineages have intermingled over intervening centuries since settlement, so modern Malagasy have ancestry in both Indonesia and Africa."
The team, from Cambridge, Oxford and Leicester, used two types of DNA marker to study DNA diversity: Y chromosomes, inherited only through males, and mitochondrial DNA, inherited only through females. They tested how similar the Malagasy were to populations around the Indian Ocean. The set of non-African Y chromosomes found in the Malagasy was much more similar to the set of lineages found in Borneo than in any other population, which demonstrates striking agreement between the genetic and linguistic evidence. Similarly, a 'Centre of Gravity' was estimated for every mitochondrial DNA to suggest a likely geographical origin for each. This entails calculating a geographical average of the locations of the best matches within a large database of mitochondrial lineages from around the world.
"The Centres of Gravity fell in the islands of southeast Asia or in sub-Saharan Africa," explained Dr Peter Forster, from the McDonald Institute for Archaeological Research, University of Cambridge, one of the co-authors. "The evidence from these two independent bits of DNA supports the linguistic evidence in suggesting that a migrating population made their way 4500 miles across the Indian Ocean from Borneo."

The striking mix suggests that there was substantial migration of people from southeast Asia about 2000-1500 years ago - a mirror image of the migrations from that region into the Pacific, to Micronesia and Polynesia, that had occurred about 1000 years earlier. However, unlike the privations suffered by those eastward travellers, the data suggests the early Malagasy population survived the voyage well, because more genetic variation is found in them than is found in the islands of Polynesia. 'Bottlenecks' in evolutionary history, where the population is dramatically reduced in number, are a common cause of reduced genetic variation.
Even though the Africa coast is only one-twentieth of the distance to Indonesia, it appears that migrations from Africa may have been more limited, as less of the diversity seen in the source population has survived in Madagascar.
But why, if the population is a 50:50 mix, is the language almost exclusively derived from Indonesia?
"It is a very interesting question, for which we have as yet no certain answer, as to how the African contribution to Malagasy culture, evident in biology and in aspects of economic and material culture, was so largely erased in the realm of language," commented Professor Robert Dewar, of The McDonald Institute for Archaeological Research, University of Cambridge. "This research highlights the differing, and complementary, contributions of biology and linguistics to the understanding of prehistory."
The population structure in Madagascar is a fascinating snapshot of human history and a testament to the remarkable abilities of early populations to undertake migrations across vast reaches of ocean. It may also be important today for cutting edge medical science.
"There has recently been dramatic progress in the development of experimental and statistical methods appropriate for gene mapping in admixed populations," said David Goldstein, Wolfson Professor of Genetics, University College London. "To succeed, however, these methods depend on populations with well defined historical admixtures. This work shows provides compelling evidence that the Malagasy are such a population, and again shows the value of careful study of human population structure."
Our human history is a rich mix of peoples and their movement, of success and failure. Madagascar holds an enriching tale of the ability of humans to survive and to reach new lands.
Posted by arclein at 12:20 AM