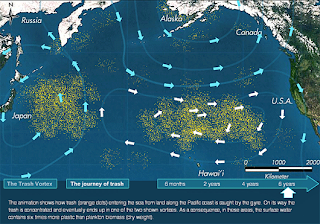 What I find most disheartening about this report is the complete lack of any visible capability to even begin addressing this problem on an international basis. Everyone is producing the garbage and it is magically finding its way into the sea. It needs a shared funding plan and that plans needs to focus on simple recovery.

Submerged mesh belts can be used to strain the material from the sea water. Such a device can be as wide as can be made and as deep as necessary. It does not have to be continuous. The collected debris would come off continuously into a transport belt or even an augured channel. This is the emulation of a large whale feeding on the debris at its leisure. Once collected, it is a simple next step to compress to the point of fusing all the plastic organics together and expelling remaining biota to produce dense blocks or cylinders.

This material is then safe to either throw overboard or even reprocess.

It is not hard to imagine a vessel collecting 10,000 tons per year. The density implied certainly suggests this level of productivity.

I do not think that we will solve the supply problem easily so long as the need exists and plastic is the cheapest and best technical solution available. In any case, ending supply will not remove the huge debris problem. A system such as I have just described could hugely reduce the problem since it is gathering naturally

So far we have about three or so serious visits to the problem. I would like to see work done on aging all the plastic components. Perhaps by undeserved good fortune all that junk is only several years old. I do not believe that but a half life estimate would be nice to have.

Editor's Note: Scuba instructor and underwater videographer Drew Wheeler is traveling on board the Algalita Marine Research Foundation's 50-foot Ocean Research Vessel, Alguita, on a two-month voyage to sample and study portions of a 10-million-square-mile oval known as the North Subtropical Gyre (aka "Pacific garbage patch"). Wheeler and the rest of the Alguita crew left Long Beach, Calif., on June 10 with a plan to cross the International Date Line and investigate regions of reported high plastic concentrations, northwest of the Hawaiian Islands. This is his eighth blog post for Scientific American.com.
6,714 miles traveled
With less than 200 miles to Honolulu, we are in the final stretch of the 2009 ORV Alguita Dateline Journey, and every one of the crew can now reflect on what they have experienced and the knowledge they have gained.
Personally, I have learned several things on this voyage, some related to the mission of substantiating the vast amounts of plastic in the ocean and others just related to life. You can't spend over 50 days on a 50-foot boat with five other people and come away entirely the same person!
This journey has allowed me to experience everything from the bewilderment and amazement of swimming among the alien life forms that exist and thrive in the most remote location on the planet. To the sadness and anger I feel when I see, first hand, what we are doing to that life, which most people will never lay their eyes upon.
The increase in plastic from the 2002 voyage to now is frightening. In just seven years, it seemed to me that everywhere we went has become a "high-accumulation zone". The amount of tiny fragments and small bits of plastic that I collected and saw, either floating past the boat or in the trawl samples on any given day was flat out disgusting.
Then add that to plastic material I saw in the water intermixed with the billions of planktonic life, and I don't need a scientific study to tell me that it is a serious problem that ultimately will affect all life on this planet. There is NO WAY a passive plankton feeder can filter out the plastic lingering among it's food supply.
My conclusion: we must stop this from getting worse by reducing or eliminating the use of non biodegradable plastic for disposable products and product packaging. If the increasing rate of plastic in the ocean does not change, then I do not see how we can avoid catastrophic changes in the health of our marine ecosystem and, as a result, to human life itself.
Now that is something to think about!
Posted by arclein at 12:15 AM