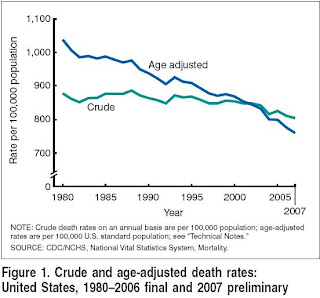 This story has been brewing for a while. It is that death rates have fallen ahead of expectations. This also shows that expectations are rising. Whether the recent pronounced fall is simply a statistical anomaly or caused by a specific change is not clearly determined as yet.
I can make a conjecture or two. During the early eighties, for reasons not terribly obvious at the time, the boomer generation not only began dumping the smoking habit, but also decided to closely manage their drinking.
It was no longer cool to become drunk out of ones mind. Those are two changes that were a clear break with the previous generational practice, or at least appeared to be.
The decline of smoking was remarked and visible, while the tighter management of alcohol was largely invisible. It was remarked more by hosts having to take back half the liquor brought in for a party.
Both changes promote better health outcomes. We forget that chronic low level drinking that occurs everyday, does damage to the liver and also promotes diabetes.
These changes have been in place for a good twenty years and that suggests that the effects on life span should now begin showing up as the boomer generation moves into their final decades.
To put this into proper perspective, if we had a serious shift in behavior in only twenty percent of the population and I believe that that is conservative, and that proportion added a reasonable ten years to their respective life spans, then that accounts for a shift in the statistics of about two years, and as noted, its appearance is simply timely.
As noted quitting smoking consistently adds a solid decade to an individual life span and management of drinking postpones the advent of diabetes by a decade also. Unfortunately, they are not additive. Most likely individuals did both and strongly reinforced their gains. Thus, in retrospect the present sudden jump in apparent life spans is consistent with past behavior that was partly unremarked upon.
All this means that boomer life spans will average in at eighty plus.

August 19, 2009
Life Expectency in the USA has increased and total deaths have fallen
http://nextbigfuture.com/2009/08/life-expectency-in-usa-has-increased.html
http://2.bp.blogspot.com/_VyTCyizqrHs/Sow6-iFRxiI/AAAAAAAAEtQ/3hmNJPk9tJQ/s1600-h/cdc12.jpg