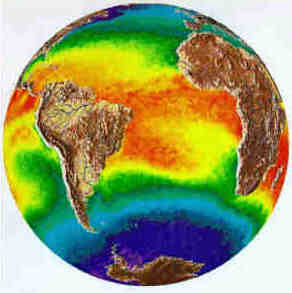 This is truly odd and highly suggestive. Here we have a measurable switching behavior rather than a fuzzy trend line. This is very important because actual global temperature declines are clearly switching events.

The example of the switch in the late seventies coincides with a steady improvement in our northwest climate since. This is a subjective impression, but the northern hemisphere has had a surplus of atmospheric heat since about that time.

I do not know how significant that this is and I am sure that it is too soon. We also do not understand the mechanism itself.

However a switching mechanism is quite able to dump us into a little ice age tomorrow morning. It may be made worse by the odd nasty volcano, but in fairness, with very rare exceptions, their impact lasts a year or two.

That does mean something odd is happening to the oceanic heat engine that we know nothing about and cannot anticipate.

I would like to get a handle on what induced this last event. I would really like to understand cause and effect. The build up may be quite gradual but the switching behavior acts like catastrophic changeover somewhere.

Why would heat flow change direction three times? How does this happen if solar input is a constant? Are we noting the effects of an injection of deep Antarctic cold waters across the equator itself?

This last idea makes some sense. It has been noted that the Antarctic has been getting colder over the past decades. This means a buildup of deep colder waters south of the equator. It is plausible that this periodically is injected into the northern hemisphere to redress balance. Let us propose that a normal injection is into the Pacific and this happens perhaps every fifty years of so and is largely responsible for global cooling.

Let us then propose that a rare occasion is an injection instead into the Atlantic. This delivers the little ice age and similar events. My point is that a periodic readjustment in the global heat sink by way of an injection across the equator nicely rebalances the books.
That it goes occasionally astray into the Atlantic is also a natural system.

I think that we can tentatively accept this bit of evidence as a first hard contribution to a robust model of heat transfer through the ocean. It does not answer the question but it does confirm we need to look here.

Physicists at the University of Rochester have combed through data from satellites and ocean buoys and found evidence that in the last 50 years, the net flow of heat into and out of the oceans has changed direction three times.
These shifts in the balance of heat absorbed from the sun and radiated from the oceans correlate well with past anomalies that have been associated with abrupt shifts in the earth's climate, say the researchers. These anomalies include changes in normal storm intensities, unusual land temperatures, and a large drop in salmon populations along the western United States.
The physicists also say these changes in ocean heat-flow direction should be taken into account when predicting global climate because the oceans represent 90 percent of the total heat in the earth's climate system.
The study, which will appear in an upcoming issue of Physics Letters A, differs from most previous studies in two ways, the researchers say. First, the physicists look at the overall heat content of the Earth's climate system, measuring the net balance of radiation from both the sun and Earth. And second, it analyzes more completely the data sets the researchers believe are of the highest quality, and not those that are less robust.
"These shifts happened relatively abruptly," says David Douglass, professor of physics at the University of Rochester, and co-author of the paper. "One, for example, happened between 1976 and 1977, right when a number of other climate-related phenomenons were happening, such as significant changes in U. S. precipitation."
Douglass says the last oceanic shift occurred about 10 years ago, and that the oceans are currently emitting slightly more radiation than they are receiving.
The members of the team, which includes Robert Knox, emeritus professor of physics at the University, believe these heat-flux shifts had previously gone unnoticed because no one had analyzed the data as thoroughly as the Rochester team has.
The team believes that the oceans may change how much they absorb and radiate depending on factors such as shifts in ocean currents that might change how the deep water and surface waters exchange heat.
In addition to the correlation with strange global effects that some scientists suspect were caused by climate shifts, the team says their data shows the oceans are not continuously warming-a conclusion not consistent with the idea that the oceans may be harboring "warming in the pipeline." Douglass further notes that the team found no correlation between the shifts and atmospheric carbon dioxide concentration.
"An interesting aspect of this research is that no reference to the surface temperature itself is needed," says Knox.
"The heat content data we used, gathered by oceanographers, was gleaned from temperature measurements at various ocean depths up to 750 meters." The team also found that the radiative imbalance was sufficiently small that it was necessary to consider the effect of geothermal heating. Knox believes this is the first time this additional source of heat has been accounted for in such a model.
The team notes that it's impossible to predict when another shift might occur, but they suspect future shifts might be similar to the three observed. Both Douglass and Knox are continuing to analyze various climate-related data to find any new information or correlations that may have so far gone unnoticed.
Posted by arclein at 12:10 AM