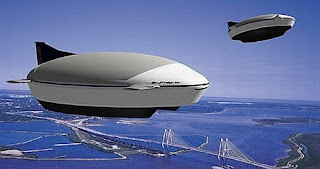 These folks are also focused on the cross country trucking market, as well they should. Their project is to provide a stiff skinned airship able to acquire higher speed.
Quite rightly they also observe that this will allow vastly larger vessels able to carry a few hundred passengers to be built in time.
There are ample economic incentives to scale up if material strength is up to the challenge. Thus once we see profitable long haul trucking established, a lot of other applications will arise. We are going to get quite used to seeing these birds up there.
It may even become a preferred method of short haul travel since we are looking at a bus load in which the craft can come into even a built up area to pick up passengers if the handling equipment can be designed to hold the craft.
If it can land and load like a bus and then move at close to a hundred mile per hour, it will be perfect for short commuter flights.
Stiff skin design allows for a somewhat faster passage through the air, but the claims of 200 mph is a fantasy. At that speed you would have wing lift able to do the whole job. Why bother then? It will allow a comfortable thirty percent improvement over a likely 60 to 70 mph for an ordinary design because of the reduction in drag. It laminar flow is also initiated at the leading edges, it will be possible to get a lot of additional speed.
An operating speed of close to 120 mph seems plausible and is a major challenge to other carriers. Add a thirty mph tail wind by skillful navigation and it is a quick trip to Chicago from LA.
It appears everyone has made the connection between present truck load size and desirable air ship design. Once there are several designs in the air providing service, markets will be proven able to handle much larger sizes. That will lead naturally to mega sized craft able to handle several shipping containers.
I do not see us engineering something able to handle thousands of tons anytime soon, but it may be that scalable.

In practice, this is a case of the bigger the better

First Solar Powered Airship Flight Around the World! (NOT a Blimp!)
http://www.turtleairships.blogspot.com/
SOLAR POWERED air transport is the future!
Turtle Airships has been working towards this goal for over two decades. Recent advancements in solar cell technologies is making solar powered flight possible; and several small airplanes are already flying.
However, only large airships have the room needed to carry enough solar cells to create aircraft that can carry large numbers of passengers or cargo. No airplane can do this, simply because they do not have the square foot capacity needed.
The "turtle" airship is NOT A BLIMP. Turtle Airships' goal is to create a worldwide airship industry; manufacturing and operating large numbers of rigid shelled, fast, amphibious, solar powered airships.
Turtle Airships is always pleased to answer questions about our business; and, will be pleased to discuss investment or joint venture opportunities, and to help other organizations create this new form of air transport.
We will build a solar powered airship and fly it around the world.
It will be constructed of high strength aircraft grade aluminum alloy reinforced with carbon fiber composites. The top half of the airship will be covered with thin film photovoltaic cells. Electric power generated by these solar cells will be stored in batteries, or used to drive four electric motor propellors. A back-up system will use a biodiesel powered engine to power a generator to allow the airship to fly during bad weather or at night.
The airship will be a true vertical take off/land craft; and will not need any airport runway or other ground facilities to operate from. The airship will be designed as an amphibious craft, able to land or take off from land or water. It will make several landings in unimproved fields and the middle of the ocean in order to demonstrate these capabilities.
The airship will carry 3-5 persons (pilot and media).
It will measure approximately 125' long x 75' wide and 30' in height.Cruise speed of the airship is expected to be 80-100 mph.

This promotional demonstration flight will highlight the capabilites of the "turtle" airship design.

Contract sales of larger airships will result from positive media exposure to this new form of SOLAR POWERED FLIGHT.
The planned route of the Round-the-World flight will travel eastward from a departure point in the U.S. southwest near the city of Phoenix; and is expected to include stops at these locations:

Posted by Darrell Campbell
Posted by arclein at 12:30 AM

I recently came across your blog and have been reading along. I thought I would leave my first comment. I don't know what to say except that I have enjoyed reading. Nice blog. I will keep visiting this blog very often.