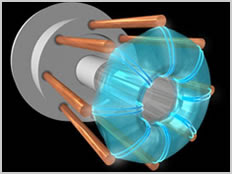 This is an update on the Focus Fusion project. Check my postings on the topic a couple of months back. This is funded and we will see a solid test and likely open the door to fresh results. This is as exciting as it gets and they are sharing their insights with us.
I admit that I an optimistic about this present work. Just as unexpected glitches can frustrate, unexpected success can also happen here. That heating is ahead of calculation is very promising if it is going in the right direction and is non linear.


Jeff Schoen and volunteer Henning Burdack are making progress in coding a one-dimensional model of the filamentation process in the DPF, while John Guillory and Lerner are ironing out wrinkles in the algorithm for the model. Luis Manuel Diaz Angulo is continuing to work on the difficult problem of incorporating our simulation approach into a 2-D model that can give more realistic results. Lerner’s preliminary calculations on the idea that shock waves from electron beam oscillations are the primary way that the electron beam heats the plasmoid are encouraging.
This heating is much more efficient than can be explained by collisions of individual electrons, so must involve some instability or other collective phenomenon, but we have never been certain exactly what the mechanism is. Yadav showed that a rapidly oscillating electron beam can produce shock waves in an inhomogenous plasma that efficiently transfers energy to the plasma. Such a mechanism may operate in the DPF plasmoid, as the electron beam is rapidly pulsed—each pulse lasting only femtoseconds. The relativistic beam travels much faster than the Alfven velocity in the plasmoid, a velocity which is the magnetic equivalent of the speed of sound in a neutral gas, so shock formation is possible. LPP contractor John Guillory has written a number of papers on such shock heating and he and Lerner will investigate if the mechanism can explain known DPF experimental results.
The evolution of fast rising electron current pulses propagating through an inhomogeneous plasma has been studied through electron magnetohydrodynamic fluid simulations. A novel process of anomalous energy dissipation and stopping of the electron pulse in the presence of plasma density inhomogeneity is demonstrated. The electron current essentially dissipates its energy through the process of electromagnetic shock formation in the presence of density inhomogeneity. A direct relevance of this rapid energy dissipation process to the fast ignition concept of laser fusion is shown
LPP (Lawrenceville Plasma Physics - company working on Focus Fusion) hopes to be producing power using Focus Fusion by December 31, 2014.
In May of 2001, Experiments at Texas A&M University confirmed predictions from Lerner theory that energies above 100 keV (equivalent to 1.1 billion degrees) can be achieved with the plasma focus.The goals to the end of 2010 for the current experiments are
* to confirm the achievement of the high temperatures first observed in previous experiments at Texas A&M University;

* to greatly increase the efficiency of energy transfer into the tiny plasmoid where the fusion reactions take place;

* to achieve the high magnetic fields needed for the quantum magnetic field effect which will reduce cooling of the plasma by X-ray emission; and