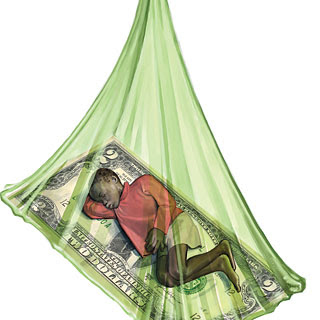 Every once in a while common sense breaks through. When will these project managers and funding agencies simply remember that their clients are living in economies that are still largely unmonetised? Grandmother is not getting an old age pension. Governments have not learned to satisfy the local demand for currency through the most basic transfer mechanisms.
Yet the demand for medical services is fully understood. These people are getting educated and if one can not read his neighbor can. Also everyone already knows the value of a mosquito net. It is obvious and apparent. So surprise, surprise, free nets are an instant success and represent a visible investment in the people’s health.

A well told business story of the fifties told to me by a geography teacher was an anecdote about Bata Shoes.

They opened distribution of their shoes in some west African country likely as a testy of the whole regional market. All their customers had gone bare foot all their lives and no one could see why they would care. And lo and behold, they did not care at all and the venture was well on its way to been stillborn. Then one of the natives got wise to the fact that these shoes prevented hookworms. The rest is history.
Quite bluntly, five dollars per child and we have a massive decrease in malaria. This translates into a massive increase in productivity for the population and a responding increase in the tax base. This is called good policy.
Equally good policy would be a child care allowance that was sufficient to subsidize a child’s nutrition, while building out universal childhood education. Six years is sufficient to ensure basic reading and arithmetic. Yet a child needs food energy and to be free of malaria in particular. Every child missed is a poor contributor to the wealth of the state if he even survives.
Yet a mere generation of such policies and you have a vibrant population.
More than money, the population knows what is important to them and a child’s health is foremost along with basic nutrition. It needs a minimum of support and encouragement. And micro credit is discovering how to deliver financial services and money to the totally un serviced.


Good News on Malaria Control
The best price for getting anti-mosquito bed nets to the poor proves to be "free"
http://www.scientificamerican.com/article.cfm?id=good-news-on-malaria-control&sc=CAT_TECH_20090812
http://www.scientificamerican.com/media/inline/good-news-on-malaria-control_1.jpg
By Jeffrey D. Sachs
One of the persistent questions about sustainable development is how to help the worlds poorest people. Their incomes are so low that they lack access to the most basic goods and services: adequate nutrition, safe drinking water and sanitation, and life-saving health interventions. One strategy, which I have long favored, is to provide targeted financial support to help the poor to meet their basic needs and thereby to escape from the poverty trap. My colleagues and I have calculated that the cost of ensuring basic life-saving health coverage for the worlds poor would be around 0.1 percent of the gross national product of the high-income countries (10 cents per $100 of income).
One example of such targeted aid is a mass free distribution of antimalaria bed nets to people living in impoverished malarious regions of Africa. Each of these long-lasting insecticide-treated nets (LLINs) costs only around $10 to produce, transport and distribute to households in rural Africa. Because the nets last for five years and two children typically sleep under each net, the cost per child per year is a mere $0.50. Even at this remarkably low cost, however, some critics have opposed such an approach. They have claimed that the nets would go missing in large numbers because of waste by recipients and others in the supply chain who did not properly value them. These critics preferred solution is market sales of nets at a discount rather than a massive free distribution, on the grounds that even a small price would encourage more efficient use of the nets.
Yet there are two main arguments in favor of mass free distribution. The first is that the poorest people simply cannot afford to pay $10 per net. The second is that there are important spillover benefits (or positive externalities) when a person uses a bed net, because the net not only gives personal protection to the user but also helps to block transmission of the disease within the community. We should therefore encourage very high levels of bed net use, just as we do with immunizations.
This is one of those interesting cases in which both experiments and real life have now provided evidence to resolve this debate convincingly: the case for mass free distribution of bed nets has proved to be stunningly powerful. On the basis of experience and key public health concepts, official global policy has now adopted mass free distribution of anti-malaria LLINs as the global policy. As a result, after many years in which bed net coverage was extremely low, it is now soaring, and malaria
Here is how the events have unfolded. Evidence has long shown that Africas rural poor are so destitute that many are unable to pay even a tiny amount for lifesaving health interventions, even when the costs are subsidized. Not surprisingly, attempts to sell them subsidized LLINs during the years 2000 to 2005 fell badly short, even at prices as low as $2to $3 per net. The uptake of bed nets in Africa through sales was very small, and coverage remained a tiny fraction of those in need. As of 2005, before the start of large-scale free distribution, one million children or more continued to die each year in Africa of a largely preventable and wholly treatable disease.
Beginning in 2002 and 2003, the International Red Cross and UNICEF began experimenting with a mass free distribution of LLINs in some trial sites. They found that the logistics of mass free distribution were indeed feasible, that community uptake was high, and that distributed bed nets were indeed in the households in high percentages upon spot checks of the recipient communities a few months after the mass distribution.
The evidence of success of mass distribution continued to grow. The World Health Organization adopted mass distribution as its basic standard in 2007. In a Global
Malaria Action Plan, the international partnership on malaria control known as Roll Back Malaria set a goal to distribute around 300 million LLINs in Africa through free mass distribution during 2008-2010, in order to cover all sleeping sites in malaria-transmission regions. Already, as the result of mass distribution, the coverage with long-lasting insecticide treated bed nets has jumped from perhaps 10 million in 2004 to 170 million nets as of the end of 2008.

The nets are often used as fishing nets instead, with their fine mesh taking all life out of the stream. Getting people to use the nets as designed is a social issue that has not yet been solved.

Using as a fishing net is unusual. that could be ended by choosing a natural fiber that quickly disintegrated when wet.

It would also make a lousy net for trapping food unless you have a taste for mosquito larvae. Such nets are properly designed to pass as much as entrap. Otherwise a simple flume and a pillow case would be fine.

I suspect that this is an anecdotal one off tale anyway unless a particular food source lent itself to this p[articular type of entrapment.

Anyway, give them plenty of the things anyway so a surplus exists in the community. We are dealing with a society lacking all forms of manufactured resources.

Very thoughtfull post on prosperity .It should be very much helpfull.