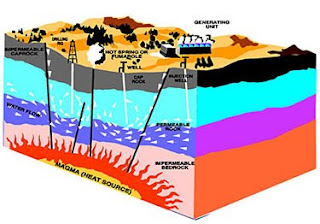 This item from a small geothermal company and is a handy reminder to check what is happening in the geothermal industry. The main player is a company called Ormat and it has projects around the world, likely as a technology supplier first. This company is owner of a stand alone facility based in Nevada and it supplies an excellent comparable for every other such project in Nevada. There are presently twenty or so listed, that I could find.
It needs to be noted that this plant was built out in a year. Thus we can expect rapid expansion when the power delivery system is able to absorb the expanding supply. The only constraint will be manpower at that point. Capital loves these plants, and the whole State of Nevada is prospective.
Besides, these plants are using present best art, but going deeper, while accelerating costs also accelerate returns. Thus improvement in art promises a huge increase in output. These early plants would have been built on a very conservative basis.
Nevada is the one State that is almost totally underlain by hot rocks and there are only isolated locales elsewhere. Thus it makes eminent sense to concentrate this form of energy production here. Tied into a national grid, the peak output can pass from six in the morning eastern time to six into the evening Pacific time, for a peak span of sixteen hours. If peak auto recharge is then covering the eight hour gap, we get a rather efficient system
Both geothermal and wind are zero fuel, capital based energy sources that can be built out and commissioned inside of twelve months. Wind long ago hit critical mass, and this tells me that geothermal has also achieved critical mass. That means that if I show up with a site and a fistful of dollars, someone will hand me the keys in twelve months.
Nevada can have hundreds, if not thousands of plants built, so it is well on the way to been the real energy state.


Nevada Geothermal Power Inc. Completes Construction of Geothermal Power Plant at Blue Mountain
VANCOUVER, B.C. (August 18, 2009) - Nevada Geothermal Power Inc. (NGP) (TSX-V: NGP, OTC-BB: NGLPF) today announced that construction is completed on the 49.5 megawatt (gross) Blue Mountain 'Faulkner 1' geothermal power plant. Mechanical, electrical and metering systems are installed for three Energy Convertors and the cooling tower, control building, fire protection, safety systems and site grading are ready for operation.Independently, NGP has completed a 21-mile power line interconnection to the Sierra Pacific Power Company (SPPC) power grid, the production and injection well field, local power distribution system, and microwave communication system. The power line interconnection was energized on August 3rd, 2009 such that power from SPPC can now be back-fed to test numerous power plant electrical components, cooling tower fan motors and production well pumps. The first of several ground water wells has been commissioned and the water supply pipeline and cooling tower is operational.Plant commissioning of the 'Faulkner 1' geothermal plant has commenced and is expected to be completed by the end of September 2009.In early October the plant will be operational with approximately 28-30 MW (net) of firm output capacity. After start up two widely-spaced make-up wells are planned, replacing two existing shallow injectors, to allow sustainable plant output to be increased to 40 MW (net). In 2010, the NGP will commence further investigations aimed at confirming the further build out potential within the 17 square mile lease area. "NGP has achieved an enormous milestone with the completion of the construction of the 49.5 MW Blue Mountain 'Faulkner 1' power plant. Our experienced management team, industry relationships, planned additional development projects and future new acquisitions will enable NGP to embark on an exciting program of scalable growth," stated
Brian Fairbank, President & CEO. About Nevada Geothermal Power Inc.:
Nevada Geothermal Power Inc. is an emerging renewable energy developer focused on producing clean, efficient and sustainable geothermal electric power from high temperature geothermal resources in the United States. NGP currently owns a 100% leasehold interest in four properties: Blue Mountain, Pumpernickel, and Black Warrior (all of which are ideally situated in Nevada), and Crump Geyser in Oregon. These properties, which are at different levels of exploration and development, are estimated to have the potential for the generation of over 200 MW.NGP's phase 1 development at Blue Mountain; 'Faulkner 1' nameplate 49.5 MW gross power project is targeted to be Turning on the Power in October 2009. Nevada Geothermal Power Inc. Brian D. Fairbank, P. Eng.President & CEO

www.nevadageothermal.com
Posted by arclein at 12:17 AM

I recently came accross your blog and have been reading along. I thought I would leave my first comment. I dont know what to say except that I have enjoyed reading. Nice blog. I will keep visiting this blog very often.