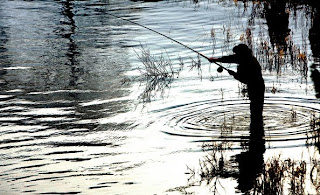 This is a timely reminder that reversal of environmental abuse is surprisingly easy. Mother Nature is happy as hell to help out. All one has to do at the least is to put in basic common sense rules that stops the abuse.

Twenty years of step by step curtailment of polluting sources has allowed the salmon to return.

It is my firm conclusion that all riverine systems must design in natural bank based refugia that is fairly well sized in order to filter incoming ground water and screen most surface drainage. Trees in particular need to be protected to full maturity which may be centuries.

Farmers will cry to see precious acres been removed from the plow, but planting a high end forest will satisfy that.

It is not very difficult because nature has already produced the natural boundaries in most cases. We have simply failed to take advantage of that fact and have also been simply too lazy or impecunious to make good things happen.

The existence of such refugia will swiftly restore a river to its natural optimal behavior. Twenty years is a mere snip of time for these ecosystems as the actually swift reappearance of the salmon on the Seine shows us.

That very public success will allow the emergence of a strong constituency in support of this type of development in many other locales and I expect that this is the slow beginning of a major global trend. This hard for an impatient human being to accept, but all our environmental damage is never forever. The instant we exit a watershed, nature goes to work destroying everything we have left. It may even take centuries but it will all be ground up and buried.

So simply stopping abuse is very important, and that has been happening everywhere. Perhaps in twenty years, we will be fishing for salmon in the Yangtze.

Paris: Fishing in the Seine for... salmon?


After an absence of nearly a century, Atlantic salmon have returned to France's Seine River, with hundreds swimming past the Eiffel Tower and Notre Dame cathedral this year alone, researchers told AFP.
The reappearance of salmon and other species chased from these waters by dams and pollution is all the more remarkable because no efforts have been made to reintroduce them.
They came back on their own.
"There are more and more fish swimming up the Seine," said Bernard Breton, a top official at
France's National Federation for Fishing.
"This year the numbers have exceeded anything we could have imagined: I would not be surprised if we had passed the 1,000 mark," he told AFP by phone.
2008 was already a record-breaking year, with at least 260 tallied on a video system in the fish passage of the Poses dam above Rouen, a city roughly half way between
Paris and the Atlantic Ocean.
Historically, the Seine hosted a flourishing population of salmon, a migratory species that return from the sea between December and June to their freshwater birth place to reproduce.
But the construction of dams, and especially the fouling of the Seine with chemical runoff from industry and agriculture along with organic pollution, led to their local extinction sometime between WWI and WWII.
Today, Salmo salar, or Atlantic salmon, is listed as a threatened species throughout Europe.
Imagine the surprise, then, of the weekend angler who reeled a six-kilo (13-pound) specimen just downstream from
Or the dozing fisherman in Suresnes, also downstream from the city gates, who snagged an even bigger one last October, the first such catch in over seven decades.
Salmon are not the only fish in the Seine making a comeback.
In 1995, only four species were known to swim its waters -- eels, redeye, bream and carp -- and at least one of these is invasive.
Today there are at least 32, according to the water purification authority for the larger Paris region. The lamprey eel, sea trout and shad have all joined salmon in the Seine over the last few years.
The reason, say scientists, is simple: cleaner water.
In the mid-1990s, "between 300 and 500 tonnes of fish died in the Seine up river from Paris every year because of pollution," said Breton.
But massive efforts over the last 15 years, including a new water purification plant, have removed much of the river's pollutants.
The results suggest that when it comes to conservation, restoring an ecosystem is probably a better strategy than restocking depleted waters, notes Breton.
Scientists at France's National Institute for Agricultural Research who track salmon say it is a "bellwether species", a living indicator of their habitat's state of health.
To find out more about how Atlantic salmon are recolonising their ancient river haunt, they recently captured and released seven adults in the Seine.
Four had spent less than two years at sea before returning to fresh waters, two had returned in the Spring after two years in open waters, and one had waited three years before leaving the ocean.
DNA analysis showed that the fish came from several different rivers, in France and elsewhere in Europe.
It also suggested that a new "embryo" population specific to the Seine might be forming, probably southeast of Paris at the headwaters of the Yonne River in the region of Morvan.
Atlantic salmon were once abundant throughout the north Atlantic, from Quebec to
But over the last three decades, their populations have plummeted, with commercial catches declining by more than 80 percent.
Adults spend most of their lives in small groups roaming vast distances at sea in search of food, mainly squid, shrimp and small fish such as herring.
Salmon fast during the arduous, upstream journey to their birth place, where females lay eggs and males fertilise them before dying.
Posted by arclein at 12:08 AM