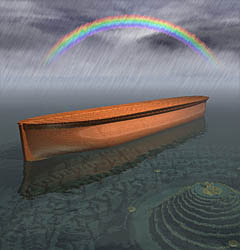 In Chapter four of his book ’19,000 years of history’, Prithvi Raj tackles the Great catastrophe or as we call it, the great flood. Again he is informed by the mass of Indian scripture rather than physical observation and the logical assemblage of such data. What we get is a series of telling observations that conform to the physical model that I have previously described. Prithvi largely presents the observations and accepts them while translating into modern language so it becomes properly accessible. This is a huge help.

Although he reports on four flooding events of which the last three were significantly weaker than the first, the first is clearly the main event. We are able to dispose of the last three events as major melt water releases. Geologists already know that massive amounts of fresh water was impounded by the highlands surrounding Hudson Bay and that this was blocked by a remaining Northern Ice Barrier or ice flow filling Hudson Strait that required much longer to be reduced. This melt water was sufficient to permit outflows into the Mississippi and into the Columbia Valley through explosive floods in the scab lands. Later, the St. Lawrence valley was also a major release point. That still left a lot of water contained by the basin. It is not hard to visualize a first release that flowed south, a second release that perhaps released the main mass of water from the Bay, the strait then resealing and a partial refilling setting up the last release.

That lets us return to the main event. Now new readers will have a problem swallowing what I am about to discuss, so in fairness please read my long chapter on the Pleistocene Nonconformity (Viewzone.com for a complete article in one place) in which I resolve the difficulties. This has led since to additional observations and fresh inferences that are also compelling. It is now rather clear that this was a man made event aimed at ending the Ice Age. In short we are well down the road in developing a full and creditable understanding of the underlying events.

The Indian sub continent sat close to the travel arc of the crustal shift. That meant, unlike Africa, that it absorbed the maximum distortion during the shift itself. It also received the maximum exposure to inundation on its coasts. More importantly, the Punjab sat on the Equator while the remaining land was south through twenty some degrees.

Fairly obviously, a thirty degree shift north would impose compression on the northern most lands into Tibet while been fairly neutral for the southern lands that rode from one side of the equator to the other. However, further south in what is the Indian Ocean, stretching effects would have been observed as lands and sea bottom approached the equator.

Coincidentally, we have two major compression arcs on Earth both in the right place to absorb unusual compression. These are the Andean Mountain Arc and the Himalayan Mountain arc. It is reasonable to think that these raw structures have been around for a long time and simply represented a convenient release point when the insult of the crustal shift hit.

Those are the visible consequences. On the other side of the equator we want to see subsidence events. We certainly have that with the Gulf of Mexico and environs, while whatever we may have in the Indian Ocean is as yet not understood. The question then is does the cultural record give us a hand? Obviously, a stretching event should see lands subside under the ocean and mountains in particular to behave strangely while sinking.

We will now return to the cultural record prepared by Prithvi.


‘Be the legend as it may and be the beliefs as they are, I think that this tale is talking about land mass submergence to the south of India. There must have existed a landmass to the south of Kerala that was probably ruled by a righteous and well-loved king called Bali. And in the colossal catastrophe of 9500 BC, this landmass got submerged into the ocean. The submergence of the landmass has been woven into the allegory and legend of the locals, which survive to this day. The people still remember it fondly as a lost paradise; they still reminisce about their king, and the festival of Onam is still celebrated with great festive fervor in remembrance of the lost paradise, with a probable philosophical’

And we also have:

‘Can you observe something here? A huge mountain is jutting out of the ocean at a point that is visible to the Indians. This can only be to the south of India, most probably in the Indian Ocean. And the mountain has collapsed into the ocean! You can notice that each and every legend of Vaishnavite thought enumerated in this chapter is talking about a colossal destruction that has taken place at some point of time in Indian history, all over India, especially to the south of India in the oceans. Huge mountains jutting out of the oceans to the south of India seem to have simply tilted to one side and disappeared from sight, probably creating huge and monstrous disturbances in the oceanic waters, the effect of which must have in turn been felt on the humans in the surrounding lands deep inside.’

And much other also describing flying mountains and the like, but mostly reflecting relative land movement and how it might have been seen to an observer on a high peak looking out over the ocean and seeing mountains shifting position while surrounded by clouds and mist.

Mountains sinking and moving along faults are plausible subsidence events. Volcanic stacks collapsing along such movements are also plausible. The real surprise to me is that the whole process appears to have been fairly gently from a physical viewpoint and possibly lasted for a longer time period that imagined. In fact it suggests that the movement velocity, once initiated approached around twenty mile per hour and was halted by the developing compression caused by the changing curvature. Therefore it is quite reasonable to presume that the whole event lasted several days at the least.

Of course, once it came to a stop, however quickly, the mass of the ocean would have invaded the lands very directly in a massive tsunami overtopping ordinary hills near the coast. That was certainly the flood of floods.

My point in all this is that the reported observations conform to the physical model that I and others have proposed and suggest many other prospective targets. There are prospectively a number of collapsed volcanoes in the Indian Ocean. There is also a Mount Meru that was a center of civilization whose existence has been attested by cultural sources around the world. This was part of a larger land mass that also subsided and collapsed. These are all pretty specific claims that should respond to exploration in the Indian Ocean.

These structures will have subsided both geologically and also by the succeeding sea rise and could be far deeper than normally anticipated.

The important news is that the cultural information is conforming smoothly to the physical data we have brought to bear and is not presenting us with a major conflict. It does not prove but it certainly does not disprove and both methods are now supporting each other’s position

The good news is that Prithvi chose to accept the observations reported without trying to modify them by changing them to fit his own model. This is way too easy to do and we are all guilty of it. Right now, we can say that this new data does fit comfortably even though details will confuse.

By knowing that we are dealing with several days of travel for the crust, the implied violence is minimized, and survivability is hugely enhanced. One did have time to stagger over shaking ground to high ground and wait it all out. Mountains did have time to be reduced in height substantially as reported, and movements along faults had days to work out. Mountains could travel miles.

Like others, I assumed these Indian scriptures were fairly recent. The reports on observations related to the four separate floods make this source at least ten centuries old with good continuity ever since. The other floods impacted coastal cities but had little impact inland. This was hardly true of the first event. Thus it is plausible for scriptures to be preserved.
Posted by arclein at 12:06 AM