What a Year in Space Did to Scott Kelly 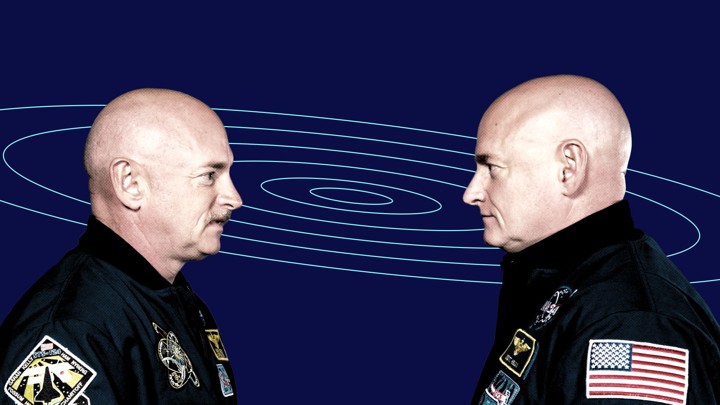 Nice bit of work and it should have been done long ago for the comparison, even though we actually learn little that is not already known.

From what we have seen regarding UFO's a metal shell provides a natural Faraday cage and a powerful magnetic field is used to move in space.  This also protects against external radiation and may well predetermine the typical shapes we all see.

At the same time they have internal gravity.  This eliminates all our known problems.  Recall that we have had gravity manipulation since 1955 and lab work I am involved with confirmed this a couple of years ago..

We are not really going into space without publicizing this particular technology..

What a Year in Space Did to Scott Kelly

An unprecedented and illuminating study monitored identical twins, one in space and one on Earth.

In the debate over whether human beings should set off to other worlds beyond Earth, one of the most compelling cons is this: Our bodies don’t like it.
Few people know this better than Scott Kelly, the NASA astronaut who spent nearly a year on the International Space Station from 2015 to 2016. Like other astronauts, Kelly served as a test subject in the study of space travel’s effects on the human body. Unlike other astronauts, Kelly has an identical twin, Mark, an astronaut himself. This gave researchers an uncommon opportunity to monitor the two brothers as they lived in two very different environments—one on Earth and the other 250 miles above it.


According to their results, published Thursday in Science, Scott experienced a number of changes that Mark did not. Most of those changes went away after Scott returned to Earth. The long stint in space, the researchers say, produced some unexpected changes—but did not lead to any clinically significant health differences.
The body, sensing and reacting to weightlessness, bristles at life in space. Fluids float freely and clog the sinuses, giving faces a puffy appearance. Bones, relieved of the job of bearing weight, thin. Muscles, faced with the same, atrophy. Parts of the eyeball, for reasons scientists are still trying to pin down, become squished or swollen. And from head to toe, cells, exposed to unearthly levels of radiation, become more at risk for cancer.
Only the brain seems to love it; after all, it’s the one that fervently processes the beautiful views of the gleaming planet below, delights in the somersaults made natural by microgravity, and comprehends—or at least attempts to comprehend—the wonder of being there, in outer space.

Scientists had expected some of the changes observed in Scott, based on earlier research of astronauts. Some of the effects were no more dramatic than stress-related changes studied on Earth—and space travel is certainly stressful. The others, such as the eyeball squishing, can clearly be attributed to Scott’s unique experience in space.
But that’s where the explanations end. With all the variables involved, isolating a single cause is nearly impossible. Researchers can’t know whether the changes were caused by microgravity, increased exposure to radiation, lack of air circulation, sleep disruption, a diet of freeze-dried food, or the stress of living in a cramped metal tube with the same people, day in and day out.
Some of the most intriguing changes occurred at the chromosomal level, in the protective bits at the ends of chromosomes that make sure they replicate properly when cells divide. These caps, known as telomeres, are known to shorten as a result of stress. Researchers expected to see this change in Scott. Instead, the astronaut’s telomeres lengthened. “You might at first think, Oh, this is great. He’s going to live longer,” Susan Bailey, the Colorado State University professor who led the telomere research, once told me. “But the opposite side of that coin is always that it also increases cancer risk, because one of the very first things cancers do is turn telomerase on to maintain telomere length so they can essentially be immortal.”
Most of the telomeres bounced back after Scott returned to Earth, but he now has more short telomeres than he did before his mission. In general, this puts someone at greater risk for quicker aging, Bailey said.
Researchers found some surprises in Scott’s gene expression. On Earth, changes in gene behavior occur in response to shifts in routine activities, such as sleep and diet, and Mark’s gene expression changed as well. But the changes to Scott’s gene expression were distinct, and scientists were stunned at the number of changes they recorded, especially in mitochondrial genes, which help the body produce energy, and in genes related to the immune system. More than 90 percent of these genes returned to normal when Scott came back. (This doesn’t mean, researchers are careful to note, that the rest are somehow “mutated,” as some news reports erroneously suggested last year.)
Researchers also detected changes in the mechanism that cells use to control gene expression, but they were too tiny to matter by the time Scott came back.
“We don’t know yet if these changes are good or bad,” explains Christopher Mason, a geneticist at Weill Cornell Medicine in New York who led this part of the research. “This could just be how the body responds. But the genes are perturbed, so we want to see why and track them to see for how long.”

That seems to be the theme of most of the findings: Something changed, probably because Scott was in space, but it’s not clear whether that’s a good or bad thing.
Like other astronauts, Scott’s retinal nerve thickened, but whether his long-term vision will be affected is unclear. One category of bacteria in Scott’s gut increased, while another decreased; the ratio returned to normal after the mission, and the shift remains a mystery. Scott’s cognitive abilities, which improved during his mission, sharply declined after he came back, and though they rebounded, they never returned to preflight levels. Scientists suspect that the sudden return to gravity played a role, but so could have the sudden return to interacting with more than the six people he saw constantly. Part of it could even have been the fault of people like me—the deluge of journalists who wanted to talk to Scott after he landed.

“Post-mission schedules—science and media events—are often very hectic and could have contributed to the decline,” says Mathias Basner, a psychiatry professor at the University of Pennsylvania’s Perelman School of Medicine who designed the cognitive-performance tests.

From the outset, researchers expected to find uncertainty in these results. The research, funded by NASA, is a case study of a single patient: Scott. Any detectable changes could be the result of space travel—or of differences in experiences, or of random chance. The findings cannot be extrapolated to the wider astronaut population, let alone the general population. Nor are they very useful for predicting what might happen to humans if they venture beyond the orbit of the ISS, where the protective properties of Earth’s magnetic field are still felt. Here, astronauts receive 10 times the usual amount of radiation, high-speed particles from the sun or from other sources in the cosmos. Out there, the exposure would be far worse.

Scott Kelly retired from NASA in 2016, about a month after he returned to Earth and his body began to adjust. For some time, his legs felt jiggly, his joints ached, and his skin burned, unused to the touch of fabric, hugged close to him by gravity. Space, he said back then, had been disorienting. “Even after I’ve been here nearly a year, you don’t feel perfectly normal,” he said. “There’s always a lingering something you feel. It’s not necessarily uncomfortable, but it is a harsh environment.”

The study of the twins doesn’t have to be over. Another important mission is coming up: the 2020 election. Mark Kelly, also retired, is running for a Senate seat in Arizona. Maybe some researchers would like to see how astronauts do in a different kind of stressful situation.
Posted by arclein at 12:00 AM