Found: A Quadrillion Ways for String Theory to Make Our Universe 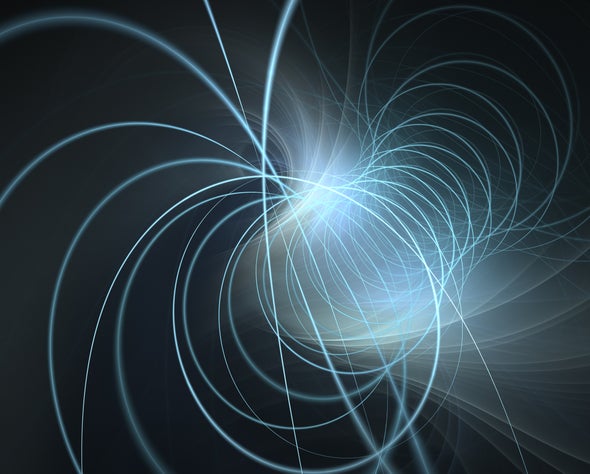 All good stuff, but remains trapped by the second order mathematica we all learned to depend on.  At least a string has two end points or something like that.  We are also not describing a spiral here.

My work rests on a proper understanding of the Space Time Pendulum, metrics for n greater than two  based on spiral cyclic functions and and the inferences thereof.

This leads rather directly to the geometric construction with Platonic solids of vertice n particles and the resultant implied curvatures determined by the appropriate n metric.  It is all there and it is no accident that we are resolving such geometry in our empirical work.  Divide by n to compare scales.

Found: A Quadrillion Ways for String Theory to Make Our Universe

Stemming from the “F-theory” branch of string theory, each solution replicates key features of the standard model of particle physics

Physicists who have been roaming the “landscape” of string theory—the space of zillions and zillions of mathematical solutions of the theory, where each solution provides the kinds of equations physicists need to describe reality—have stumbled upon a subset of such equations that have the same set of matter particles as exists in our universe.

But this is no small subset: there are at least a quadrillion such solutions, making it the largest such set ever found in string theory.

According to string theory, all particles and fundamental forces arise from the vibrational states of tiny strings. For mathematical consistency, these strings vibrate in 10-dimensional spacetime. And for consistency with our familiar everyday experience of the universe, with three spatial dimensions and the dimension of time, the additional six dimensions are “compactified” so as to be undetectable.

Different compactifications lead to different solutions. In string theory, a “solution” implies a vacuum of spacetime that is governed by Einstein’s theory of gravity coupled to a quantum field theory. Each solution describes a unique universe, with its own set of particles, fundamental forces and other such defining properties.

Some string theorists have focused their efforts on trying to find ways to connect string theory to properties of our known, observable universe—particularly the standard model of particle physics, which describes all known particles and all their mutual forces except gravity.

Much of this effort has involved a version of string theory in which the strings interact weakly. However, in the past two decades, a new branch of string theory called F-theory has allowed physicists to work with strongly interacting, or strongly coupled, strings.

“An intriguing, surprising result is that when the coupling is large, we can start describing the theory very geometrically,” says Mirjam Cvetic of the University of Pennsylvania in Philadelphia.

This means that string theorists can use algebraic geometry—which uses algebraic techniques to tackle geometric problems—to analyze the various ways of compactifying extra dimensions in F-theory and to find solutions. Mathematicians have been independently studying some of the geometric forms that appear in F-theory. “They provide us physicists a vast toolkit”, says Ling Lin, also of the University of Pennsylvania. “The geometry is really the key… it is the ‘language’ that makes F-theory such a powerful framework.”

Now, Cvetic, Lin, James Halverson of Northeastern University in Boston, and their colleagues have used such techniques to identify a class of solutions with string vibrational modes that lead to a similar spectrum of fermions (or, particles of matter) as is described by the standard model—including the property that all fermions come in three generations (for example, the electron, muon and tau are the three generations of one type of fermion).

The new work shows that there are at least a quadrillion solutions in which particles have the same chiral spectrum as the standard model, which is 10 orders of magnitude more solutions than had been found within string theory until now. “This is by far the largest domain of standard model solutions,” Cvetic says. “It’s somehow surprising and actually also rewarding that it turns out to be in the strongly coupled string theory regime, where geometry helped us.”

A quadrillion—while it’s much, much smaller than the size of the landscape of solutions in F-theory (which at last count was shown to be of the order of 10272,000)—is a tremendously large number. “And because it’s a tremendously large number, and it gets something nontrivial in real world particle physics correct, we should take it seriously and study it further,” Halverson says.

Further study would involve uncovering stronger connections with the particle physics of the real world. The researchers still have to work out the couplings or interactions between particles in the F-theory solutions—which again depend on the geometric details of the compactifications of the extra dimensions.

It could be that within the space of the quadrillion solutions, there are some with couplings that could cause the proton to decay within observable timescales. This would clearly be at odds with the real world, as experiments have yet to see any sign of protons decaying. Alternatively, physicists could search for solutions that realize the spectrum of standard model particles that preserve a mathematical symmetry called R-parity. “This symmetry forbids certain proton decay processes and would be very attractive from a particle physics point of view, but is missing in our current models,” Lin says.

Also, the work assumes supersymmetry, which means that all the standard model particles have partner particles. String theory needs this symmetry in order to ensure the mathematical consistency of solutions.

But in order for any supersymmetric theory to tally with the observable universe, the symmetry has to be broken (much like how a diner’s selection of cutlery and drinking glass on her left or right side will “break” the symmetry of the table setting at a round dinner table). Else, the partner particles would have the same mass as standard model particles—and that is clearly not the case, since we don’t observe any such partner particles in our experiments.

Crucially, experiments at the Large Hadron Collider (LHC) have also shown that supersymmetry—if it is the correct description of nature—is not broken even at the energy scales probed by the LHC, given that the LHC has yet to find any supersymmetric particles.

String theorists think that supersymmetry might be broken only at extremely high energies that are not within experimental reach anytime soon. “The expectation in string theory is that high-scale [supersymmetry] breaking, which is fully consistent with LHC data, is completely possible,” Halverson says. “It requires further analysis to determine whether or not it happens in our case.”

Despite these caveats, other string theorists are approving of the new work. “This is definitely a step forward in demonstrating that string theory gives rise to many solutions with features of the standard model,” says string theorist Washington Taylor of MIT.

“It’s very nice work,” says Cumrun Vafa, one of the developers of F-theory, at Harvard University. “The fact you can arrange the geometry and topology to fit with not only Einstein’s equations, but also with the [particle] spectrum that we want, is not trivial. It works out nicely here.”

But Vafa and Taylor both caution that these solutions are far from matching perfectly with the standard model. Getting solutions to match exactly with the particle physics of our world is one of the ultimate goals of string theory. Vafa is among those who think that, despite the immensity of the landscape of solutions, there exists a unique solution that matches our universe. “I bet there is exactly one,” he says. But, “to pinpoint this is not going to be easy.”
Posted by arclein at 12:00 AM