How Israel is working to remove Palestinians from Jerusalem 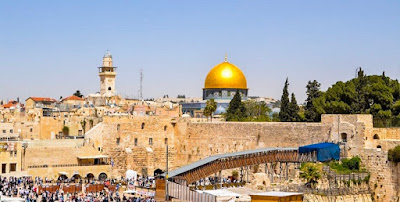 This is unfortunate, but it does put a continuing price on  the refusal to negotiate by the Palestinians as does the continuing creation of new land development and housing in the West Bank.  It has been obvious from the very beginning that a negotiated deal was always available and just as consistently such a deal has been rejected or quickly subverted.

Understand something though, ending this nonsense is completely possible.  It can even be ended in a way that allows everyone to prosper and even to largely live where they choose.  The solution can even be imposed.  It can be imposed by Israel or it can be imposed by the USA or the UN with their cooperation. Until then we have this suppression operation attempting to get even talks going whose outcome will naturally be betrayed.

Alternately every Palestinian can remove themselves in order to have good life elsewhere.  We live in the Age of Modernity so why not?  Buying farmland in the Great Valley would be a wonderful idea.  We are entering an era of increasing demand for manpower in agriculture...

The 350,000 Palestinian inhabitants of occupied East Jerusalem are caught between a rock and hard place, as Israel works ever harder to remove them from the holy city in which they were born, analysts and residents warn.


That process, they say, has only accelerated in the wake of US President Donald Trump’s decision a year ago to relocate the American embassy to Jerusalem, effectively endorsing the city as Israel’s exclusive capital.


“Israel wants Palestinians in Jerusalem to understand that they are trapped, that they are being strangled, in the hope they will conclude that life is better outside the city,” said Amneh Badran, a politics professor at Jerusalem’s Al Quds university.


Since Israel seized the eastern part of Jerusalem in 1967 and then illegally annexed it in 1981, it has intentionally left the status of its Palestinian population unresolved.


Israeli officials have made Palestinians there “permanent residents,” though, in practice, their residency is easily revoked. According to Israel’s own figures, more than 14,500 Palestinians have been expelled from the city of their birth since 1967, often compelling their families to join them in exile.


Further, Israel finished its concrete wall slicing through East Jerusalem three years ago, cutting some 140,000 Palestinian residents off from the rest of the city.


A raft of well-documented policies – including house demolitions, a chronic shortage of classrooms, lack of public services, municipal underfunding, land seizures, home evictions by Jewish settlers, denial of family unification, and police and settler violence – have intensified over the years.


At the same time, Israel has denied the Palestinian Authority, a supposed government-in-waiting in the West Bank, any role in East Jerusalem, leaving the city’s Palestinians even more isolated and weak.


All of these factors are designed to pressure Palestinians to leave, usually to areas outside the wall or to nearby West Bank cities like Ramallah or Bethlehem.


“In Jerusalem, Israel’s overriding aim is at its most transparent: to take control of the land but without its Palestinian inhabitants,” said Daoud Alg’ol, a researcher on Jerusalem.


Like others, Mr Alg’ol noted that Israel had stepped up its ‘Judaisation’ policies in Jerusalem since the US relocated its embassy. “Israel is working more quickly, more confidently and more intensively because it believes Trump has given his blessing,” he said.


Demographic concerns dominated Israel’s thinking from the moment it occupied East Jerusalem in 1967, and subordinated it to the control of Jewish officials in West Jerusalem – in what Israel termed its newly “united capital”.


City boundaries were expanded eastwards to attach additional Palestinian lands to Jerusalem and then fill in the empty spaces with a ring of large Jewish settlements, said Aviv Tartasky, a researcher with Ir Amim, an organisation that campaigns for equal rights in Jerusalem.


The goal, he added, was to shore up a permanent three-quarters Jewish majority – to ensure Palestinians could not stake a claim to the city and to allay Israeli fears that one day the Palestinians might gain control of the municipality through elections.


Israel has nonetheless faced a shrinking Jewish majority because of higher Palestinian birth rates. Today, Palestinians comprise about 40 per cent of the total population of this artificially enlarged Jerusalem.


Israel has therefore been aggressively pursuing a twin-pronged approach, according to analysts.


On one side, wide-ranging discriminatory policies – that harm Palestinians and favour Jewish settlers – have been designed to erode Palestinians’ connection to Jerusalem, encouraging them to leave. And, on the other, revocation of residency rights and the gradual redrawing of municipal boundaries have forcibly placed Palestinians outside the city – in what some experts term a “silent transfer” or administrative ethnic cleansing.


Israel’s efforts to disconnect Palestinians from Jerusalem are most visibly expressed in the change of Arabic script on road signs. The city’s Arabic name, Al Quds (the Holy), has been gradually replaced by the Israeli name, Urshalim, transliterated into Arabic.


The lack of services and municipal funding and high unemployment mean that three-quarters of Palestinians in East Jerusalem live below the poverty line. That compares to only 15 per cent for Israeli Jews nationally.


Despite these abysmal figures, the municipality has provided four social services offices in the city for Palestinians, compared to 19 for Israeli Jews.


Only half of Palestinian residents are provided with access to the water grid. There are similar deficiencies in postal services, road infrastructure, pavements and cultural centres.


Meanwhile, human rights groups have noted that East Jerusalem lacks at least 2,000 classrooms for Palestinian children, and that the condition of 43 per cent of existing rooms is inadequate. A third of pupils fail to complete basic schooling.


But the biggest pressure on Palestinian residents has been inflicted through grossly discriminatory planning rules, said Mr Tartasky.


In the areas outside the wall, Palestinians have been abandoned by the municipality – and receive no services or policing at all.


Israel’s long-term aim, said Mr Tartasky, had been exposed in a leak of private comments made by Israeli Prime Minister Benjamin Netanyahu in 2015. He had proposed revoking the residency of the 140,000 Palestinians outside the wall.


“At the moment, the government is discussing putting these residents under the responsibility of the army,” Mr Tartasky said.


That would make them equivalent to Palestinians living in Israeli-controlled areas of the West Bank and sever their last connections to Jerusalem.


Meanwhile, on the inner side of the wall, Palestinian neighbourhoods have been tightly constrained, with much of the land declared either “scenic areas” or national parks, in which construction is illegal, or reserved for Jewish settlements. The inevitable result has been extreme overcrowding.


In addition, Israel has denied most Palestinian neighbourhoods’ masterplans, making it all but impossible to get building permits.


“The advantage for Israel is that planning regulations don’t look brutal – in fact, they can be presented as simple law enforcement,” said Mr Tartasky. “But if you have no place to live in Jerusalem, in the end you’ll have to move out of the city.”


An estimated 20,000 houses – about 40 per cent of the city’s Palestinian housing stock – are illegal and under threat of demolition. More than 800 homes, some housing several families, have been razed since 2004.


As well as the large purpose-built Jewish settlements located on Palestinian land in East Jerusalem, several thousand extremist settlers have taken over properties inside Palestinian neighbourhoods, often with the backing of the Israeli courts.


Mr Tartasky noted that Israel has been accelerating legal efforts to evict Palestinians from their homes over the past year, with close to 200 families in and around the Old City currently facing court battles.


When settlers move in following such evictions, Ms Badran said, the character of the Palestinian neighbourhoods rapidly changes.


“The settlers arrive, and then so do the police, the army, private security guards and municipal inspectors. The settlers have a machine behind them whose role is to make life as uncomfortable as possible for Palestinians. The message is: ‘You either accept your subjugation or leave’.”


In Silwan, where settler groups have established a touristic archaeological park in the midst of a densely populated Palestinian community just outside the Old City walls, life has been especially tough.


Mr Alg’ol, who lives in Silwan, noted that fortified settler compounds had been established throughout the area, many dozens more Palestinian families were facing evictions, excavations were taking place under Palestinian homes, closed-circuit TV watched residents 24 hours a day, and the security services were a constant presence. Many hundreds of children had been arrested in recent years, usually accused of stone throwing.


Israel’s newest move is the announcement of a cable car to bring tourists from West Jerusalem through Palestinian neighbourhoods like Silwan to the holy sites of the Old City.


Mr Tartasky said touristic initiatives had become another planning weapon against Palestinians. “These projects, from the cable car to a series of promenades, are ways to connect one settlement to the next, bisecting Palestinian space. They strengthen the settlements and break apart Palestinian neighbourhoods.”


Mr Alg’ol’s family was one of many in Silwan that had been told their lands were being confiscated for the cable car and a new police station.


“They want to turn our community into an archaeological Disneyland,” he said. “And we are in the way. They plan to keep going until we are all removed.”