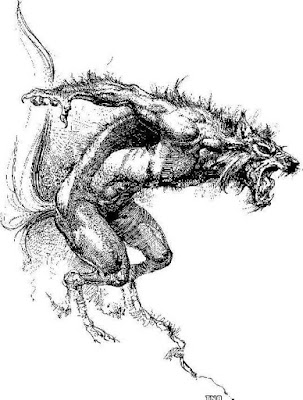 This is obviously an excellent report.  Once again it is the Giant Sloth.  In this case the creature chose to scare everyone away.  The actual movement does suggest that it was not projecting an image as is plausible in other cases.

Most likely it wanted them out of its hunting territory.

Once again this creature neither gives chase or rushes to escape which strongly suggests that bipedal motion is poor.  It relies on the upright position to scare you and set you off in a mad run.  From there it has the option of dropping to all fours and giving chase up through the trees if necessary.

This is one scary carnivore.

Butch Witkowski recently received a telephone report of a large aggressive upright canine encounter in Rothrock State Park in Centre County, PA. Butch was on-site the next day (March 31st) and then filed the following account. This incident occurred within the 'Lycan Loop' in central Pennsylvania:

The couples state that between 1PM and 1:30 PM while hiking a large wolf like creature stepped out of the wooded area near a small clearing. The creature was staring at the group and when a female member of the party started screaming the creature took two or three steps towards the group bearing its teeth and growling. All witnesses agree it seemed the screaming definitely set it off to go to an aggressive movement in the direction of the group. The hikers left the area immediately running for their lives as they put it to investigators.

The description by all members of the group state the creature was between 8 and 10 feet tall, a large wolf head, yellow eyes, long muscular arms, massive body build and strange looking legs.

Investigators from the UFO Research Center of Pennsylvania and Phantoms and Monsters Fortean Research team met with witnesses and viewed area of sighting but no evidence found. The witnesses were very cooperative and all descriptions matched.

A more invasive investigation of the area is being planned as past reports have been in the general area of Centre County.
Posted by arclein at 12:00 AM