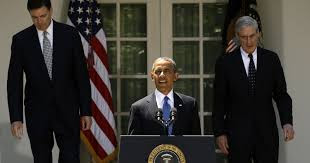 This is the last string of Q posts and we see an important Q proof were it is reported that the spying operation itself was over four years old and used four independent contractors using NSA data at least and targeting Republicans.
We also discover from Da Genova that  the FISA court has not been asleep at all and their findings has led to criminal referrals already regarding four years of Malfeasance by the FBI and the DOJ.   This is huge and it is now leading inexorably to major indictments of the officials involved.

Throw in what we surmise regarding those 96,000 sealed indictments and all hell is about to pour over the DEMs in particular.

In two weeks we will have specifically the report of Comey and his likely indictment.  That will, i think be the first domino.

One last thing.  We caught a glimpse of Andrew Weisman the day he was removed from the Mueller investigation.  I thought at the time that here was a man who was truly afraid.  Now imagine if the secondary purpose of the Mueller investigation was to gather evidence on the malfeisence of a clique of DEM lawyers.  Did his exit interview happen to include the opening of a sealed indictment?

On the face of all this Mueller has acted in a manner that is unbecoming of his stellar reputation.  Suppose instead this act is part of the plan.  We all do bad things in the wrong circumstances.  Suppose instead he has a chance to redeem himself to history?  Would a Marine Colonel not jump at the chance?

Apr 25 2019 20:20:28 (EST)
Why would a President of the United States [HUSSEIN] assign 'RENEGADE' as his USSS codename?
Define 'Renegade'.
noun
1. a person who deserts and betrays an organization, country, or set of principles.
synonyms: traitor, defector, deserter, turncoat, betrayer;
adjective: renegade
1. having treacherously changed allegiance.
Q

This is why we are here.
Good find, Anons.
[4] Contractors?
Joe D. stated tonight?
Nothing to see here.
Q

Apr 19 2019 3316 Q !!mG7VJxZNCI ID: 15b0a2 No.6242325
Apr 19 2019 14:41:40 (EST)
https://radio.foxnews.com/2019/04/19/john-dowd-rod-rosenstein-has-to-answer-for-appointing-robert-mueller-as-special-council/
https://www.scribd.com/document/406725805/Mueller-Report#from_embed
[Pg 11] Previously CLAS 'scope' > [RR] to [MUELLER]
The scope memo [highlighted w/in Mueller report] confirms the 'dossier' was the 'tool' used by [RR] to justify SC and was the primary 'vehicle' to which [RR] tasked MUELLER.
If the dossier was known to be unverified and fake, how then was an investigation started to begin with?
At what point did MUELLER determine there was no collusion?
[18-months ago?]
Was the investigation kept ongoing as a 'talking point' to rig the midterm elections?
Was the investigation kept ongoing to retain the 'BLOCKADE' to essentially restrict POTUS from unmasking and informing the public as to the TRUTH about what really happened?
Was the investigation kept ongoing to PROTECT THOSE WHO 'KNOWINGLY' COMMITTED TREASON/SEDITION?
NO BLOCKADE = GAME OVER
Q