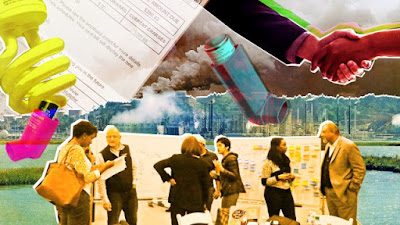 I have a severe problem with pipeline law in both Canada and the USA. Like the military, their existence is very much in the NATIONAL Interest and that must always override all forms of local interest.  Just as surely just compensation must be paid as well, even if the overlying land is kept in cultivation, as if it were taken out of cultivation.  This is neither unreasonable, nor is it expensive, as the loss in profit will be a few dollars every year.  Allowing a farmer to efectively double dip will make it all less painful.  We are talking about a couple of acres affected per square mile of farmland.

Not understanding this has led to boondoggles for lawyers and unending rubbish lawsuits in which we will end up having courts decide the laws of Physics.  We need to stop this nonsense.

Of course there are real environmental concerns.  Those pale compared to the environmental concerns been inflicted by industrialized Agriculture which negatively affect millions of acres of prime farmland in this day and age and have a real potential of triggering a collapse bringing about death by starvation impacting a billion people.
.
TransCanada’s Keystone XL pipeline was flailing. Trump just revived it.

Just a couple of weeks ago, it looked like TransCanada’s Keystone XL pipeline was in hot water. Decades of activism, protests, and court cases were paying off, big league, as delays harmed the financial viability of the project. On Friday, the president revived the project with a stroke of his executive pen.

TransCanada had been losing in U.S. courts for the past few years: Obama-appointed federal judge Brian Morris ruled in November that President Trump failed to consider climate change when he approved the pipeline in 2017. In response, TransCanada turned to the San Francisco-based 9th Circuit Court of Appeals to override the ruling, which had required the Trump administration to draw up a new environmental impact report. But that court sided with Morris, a decision that threatened to cause the company to miss out on the 2019 construction season.

Luckily for TransCanada, the company has a friend in the White House. Trump just signed a presidential permit that allows it to sidestep the courts and “construct, connect, operate, and maintain” the line between the U.S. and Canada, in addition to maintaining a facility in Montana that will ship tar-sands crude oil into the United States.

Like many Trump administration decisions, the move is considered highly unusual. If Trump’s decision holds up, it revokes a previous permit granted by Trump — the one that had been found insufficient by Morris — and reissues it.

“Our first response upon seeing this White House communication was that it must be an April Fools joke,” a spokesperson for the Northern Plains Resource Council, a plaintiff in the ongoing lawsuit against Keystone XL, said in a press release. “This new effort appears blatantly illegal on its face and is an unprecedented effort by a United States president to supersede the judicial branch of the United States government.”
Posted by arclein at 12:00 AM