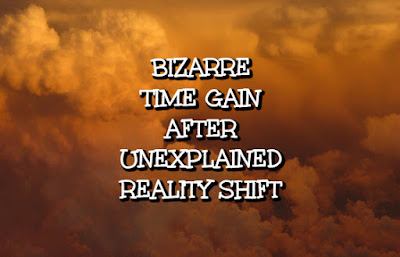 This guy, under serious time pressure literally jumps back to an earlier page in time in order to transit to his parking lot, then bounces back to another time slot page that is ideal for his arrival.  Wish we could do this ourselves on demand.
The page like nature of time makes this theoretically easy and is actually proof positive of my Cloud Cosmology.  Trigger it is the challenge, however intent may help and it may well be worth trying out in therms of meditation practice.
Just do not do it in front of an audience and then return a few minutes later...

"When I was in my 20's I worked for NASA Ames Research Center in Mountain View, California. You know the place with the gigantic blimp hangars? Yep, that's the one. It was a great job with a rotten commute. It took about an hour to go under 25 miles to work. I'm the workaholic type personality so I left even earlier than I needed to every day. One of the great perks was a canteen so you could sit down and have breakfast before things got hectic. An added bonus was it was so cheap that I could afford it every day.


One morning I got up very late. I had to leave about 5:45 to average getting there at 7:00. It was already 6:45. My alarm clock was old and it had finally died. Jumped up, got dressed (like ugh, I look like I slept under a bus) and ran out the door. No breakfast today and my boss had the dubious name of Wolfe Kahle. I don't think he ever got the pun, but he lived up to it. He would corner you at your desk and give you a good 5 minutes dressing down at top volume. At best, I'd be an hour and a half late. Bay Area traffic is known for being bumper to bumper, even though the freeways are 8 lanes across. Anyone from the Bay Area will be saying preaching to the choir at this point, as an aside.
Especially on 101 heading north out of San Jose. The later you leave, the more clogged the freeways are. I had to wait at a metered ramp for 10 minutes just to jump on at Cottle Road. Great. I turned on my usual AM station KGO so that I could get traffic updates. I want to stress that they update roads every 10 minutes. In about 20 minutes, I had gone maybe 4 miles. Nail biting panic and worrying for the next 40 minutes until I got up to Logue Avenue exit. It's a clover leaf with a total pain of a merge. I had to come off the freeway, jump 3 lanes left and hit a turn lane with a protected arrow. The whole time I was hearing updates on the time and traffic.


As I merged into the clover leaf I heard a pop of air pressure almost like when a storm rolls in. Now here's the fun part. I hit the clover leaf, sighed and braced for the merge. No traffic. Not one car. It's quiet. I noticed the sky was darker and wondered if there was a storm coming in. The turn light went green and I drove the six or so blocks to NASA. It's darker still and the guard barely glanced at me at the gate. I was used to seeing the same man every day and at least saying hello. This guy looked 'wrong.' If you pulled someone out of 1950 and plunked him down in a mall, you would notice that all of the details are just enough to grab your attention, without knowing why. It hit me so hard that I watched him in my rearview mirror as long as I could. He never moved or went back in the little guard shack. As I pulled into parking lot, this is going to sound very loopy by the way, but my car radio went silent and everything 'shifted'. Have you ever been blindfolded and spun around and gotten very dizzy? It's that feeling. Everything was subtly different. The lot was empty. I sat there for a minute with my mouth open trying to figure out if I had lost my mind.


My car radio suddenly blasted back on and I heard the KGO announcer say "Good Morning, Bay Area. It's 6:29 and traffic is still light. We'll have updates in one minute, but first here's our weather outlook." I checked every station. It was the same. My watch said 8:29. Where did the time go? And did I really want to find out? After all, NASA Ames would have been a good place to monitor if you wanted to see what humanity was up to technologically. The rest of the day went on normally, but I never forgot it." - ETX
Posted by arclein at 12:00 AM