How to make sense of the black hole image 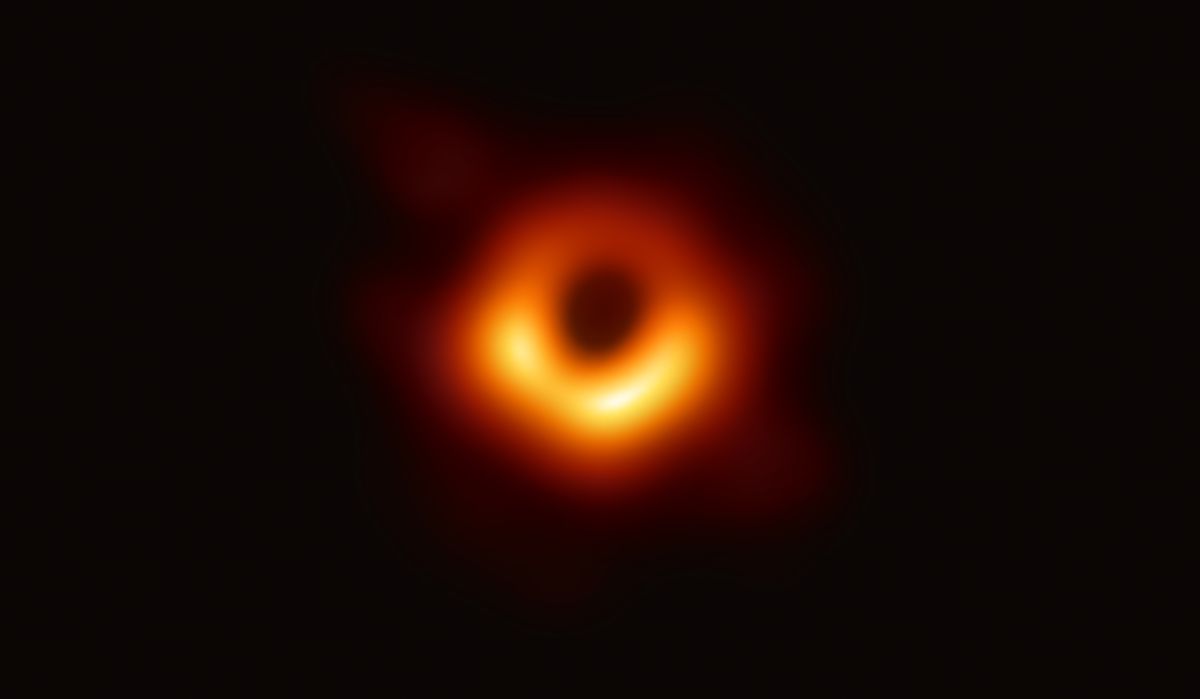 We are using radio waves to see the actual event horizon.
This confirms that such an horizon exists and that it does not produce radio waves. I suspect that it produces everything else though by literally tearing apart all matter and converting it into complex radiation carrying off information.
What i would like to see is for a Glazar, Blazar or Quazar  we can readily observe to be likewise imaged.  No one else has tweaked to this plausible association yet and our understanding of the physics will be clarified in the process.

\
How to make sense of the black hole image, according to 2 astrophysicists

Think on this: The light at the center of the black hole picture has been forever removed from the observable universe.

This week, a group of scientists unveiled the first-ever image of a black hole at the center of the Messier 87 galaxy, some 55 million light-years away.


The image comes to us from a vast and incredibly sophisticated scientific collaboration called the Event Horizon Telescope, which involves 200 scientists in 20 countries who’ve been working together for nearly a decade.


The image they created has been eagerly anticipated by all those enthralled by black holes, and it does not disappoint: a deep black well in the center of a bright ring of plasma and gas.


Some may not be impressed by the slight blurriness of the image. But there’s so much more to it than what immediately meets the eye. Two astrophysicists — Sheperd Doeleman, the project leader of the Event Horizon Telescope, and Katie Mack of North Carolina State University, who was not involved with the effort — walked me through a few of the coolest aspects of the image that helped me appreciate just wonderfully mind-blowing it is.

First, check out the singularity, and the light we can’t see


Let’s begin with the dark spot, the hole in the center. The first thing to know is that while it may look like an object, it isn’t one — not exactly.


The dark spot is a shadow, a sink, an exit portal from our observable universe. There’s light in that dark spot, but we can’t see it. It’s forever removed from our view.


The black hole is black because of a singularity, or a region where the fabric of space and time itself has collapsed in on itself, forming a single point with infinite density.


That single point has such strong gravity, that as light approaches it, there’s a region beyond which nothing can escape its grasp. That region, called the event horizon, is kind of like the top of a waterfall.


Now imagine a fish swimming toward the top of the waterfall. At a certain point, the water is rushing so fast that the fish can’t escape by swimming in the other direction.


In this metaphor, the beam of light is the fish — and it’s approaching the black hole. “When the matter and light get too close to the black hole, the black hole just swallows it up, it removes that light from the universe,” Mack says.


When you look at the dark region of the black hole, know: There’s light and matter in there. We just can never, ever see it. Those fishes have left our observable universe.
Second, think about what’s happening to the light we can see


In the image, look at the ring surrounding the dark center. (You’ll see it’s brighter on the bottom than on the top). You might think this ring of material, or the innermost edge of it, represents that event horizon. It actually doesn’t.


That boundary is known as the photon orbit, and its diameter is about 2.5 times larger than that of the event horizon. Light that travels beyond the photon orbit could, conceivably, escape the black hole if something was to reflect it back. But it’s unlikely to. All the light in this region is heading toward the event horizon, and we don’t see it because it makes it there.


The ring around the photon orbit is bright because the matter in it is being torn to smithereens, at temperatures measured in the billions of degrees, as it is devoured by the black hole. And it’s brighter at the bottom because that light is actually moving toward us. This is due to something similar to the Doppler effect (think about how a siren sounds higher in pitch as a cop car moves toward you.) “And that tells us about how this material is rotating as it falls into the whirlpool [or waterfall],” Mack says.


The light you do see in this image (which are really representations of radio waves, more on that later) isn’t just coming from the sides of the black hole, it’s coming from behind it, from in front of it, from all directions. Space and time is so warped, that some of the light orbits the black hole in a circle.


Yes, this is hard to wrap one’s mind around. Fortunately, the National Science Foundation made this handy animation, showing how the light warps, and slings around the black hole, leading to the image we see above.


But the new image is truly extraordinary because it, “lets us see for the first time the raw geometry of spacetime,” Doeleman of the Event Horizon Telescope tells me.


It’s a circle, just as the equations derived from Albert Einstein tell us.
The final thing that we should appreciate about the black hole image: that we can see it at all


The telescopes used in the Event Horizon effort were radio telescopes. That means they only “see” radio frequencies on the electromagnetic spectrum. It could have been the case that all the activity surrounding the black hole could have absorbed or blocked those radio waves from reaching us.


“The [material] around the black hole is transparent to radio waves, so we can see through all the hot gas trying to get through the event horizon,” Doeleman says. “Otherwise all we’d see would be some big blob.”


A lot of things had to go right for this image to come together.


There had to be some radiation emanating from the outskirts of the black hole, and it had to reach Earth without being knocked off course or occluded by a celestial object. The Event Horizon team constructed a virtual telescope the size of the Earth to view that radiation (more on how that works here). It’s a coincidence that the right size of telescope to see this black hole is the size of the Earth. If astronomers needed a telescope larger than Earth, they’d be out of luck.


Then comes the human collaboration: Eight observatories all over the world had to sync up their clocks to an absurdly specific degree.


With more images like this, we can better understand the black holes that lie at the centers of galaxies. We can better understand how our theories of gravity work in the most extreme of conditions. And know, it’s possible another image of a black hole might be coming in the future. The Event Horizon team also tried to take a shot of the black hole at the center of our own galaxy, called Sagittarius A* (pronounced aloud it’s “Sagittarius A star”).


“There’s nothing wrong with that data [on the black hole at the center of our galaxy],” Doeleman says. They just decided to analyze the M87 data first, he says.


Black holes are some of the strangest things in our universe. They’re at the same time tiny and massive. And they push our understanding of the universe to its extreme. We should hope to see more of them.