The Worst Disease Ever Recorded 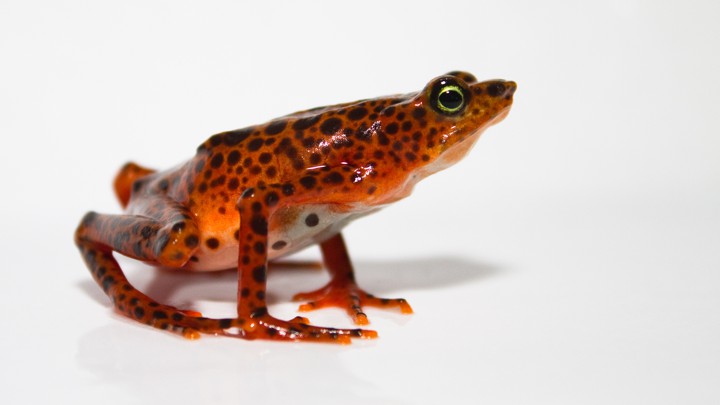 There is actually a big take home here.  it is that historic extinctions may well be primarily driven by disease vectors that suddenly become successful.  This does not particularly absolve foreign species or roundup for that matter.  Roundup could simply over turning a preexisting balance.
And that may be it.  What kept this in balance?
Biological diversity protects us all.  it is the imbalance that allows something to run amok.
The Worst Disease Ever Recorded

A doomsday fungus known as Bd has condemned more species to extinction than any other pathogen. Ed Yong

The Toad Mountain harlequin frog is endangered and at risk from the Bd fungus.B. Gratwicke / Smithsonian Conservation Biology Institute

A century ago, a strain of pandemic flu killed up to 100 million people—5 percent of the world’s population. In 2013, a new mystery illness swept the western coast of North America, causing starfish to disintegrate. In 2015, a big-nosed Asian antelope known as the saiga lost two-thirds of its population—some 200,000 individuals—to what now looks to be a bacterial infection. But none of these devastating infections comes close to the destructive power of Bd—a singularly apocalyptic fungus that’s unrivaled in its ability not only to kill animals, but to delete entire species from existence.

Bd—Batrachochytrium dendrobatidis in full—kills frogs and other amphibians by eating away at their skin and triggering fatal heart attacks. It’s often said that the fungus has caused the decline or extinction of 200 amphibian species, but that figure is almost two decades out-of-date. New figures, compiled by a team led by Ben Scheele from the Australian National University, are much worse.

Scheele’s team estimates that the fungus has caused the decline of 501 amphibian species—about 6.5 percent of the known total. Of these, 90 have been wiped out entirely. Another 124 have fallen by more than 90 percent, and their odds of recovery are slim. Never in recorded history has a single disease burned down so much of the tree of life. “It rewrote our understanding of what disease could do to wildlife,” Scheele says.

“It’s a terrifying summary,” says Jodi Rowley from the Australian Museum. “We knew it was bad, but this really confirms how bad. And these are just the declines we know about.”

The scale of these losses can be hard to appreciate, especially if you think that a frog is a frog is a frog. But amphibians are ancient survivors that have been diversifying for 370 million years, and in just five decades, one disease has nearly decimated their ranks. Imagine if a new disease started wiping out 6.5 percent of all mammal species—that would be roughly everything with hooves and everything with flippers. The world would freak out.

And amphibian experts “have been freaking out a long time,” says Karen Lips from the University of Maryland, who was involved in the new study. “Despite all the attention, I don’t think we fully appreciate what was lost.”

In the 1970s and ’80s, amphibian experts began sharing ominous anecdotes about once-plentiful populations that had mysteriously disappeared. Streams once full of eggs were clear. Nights once resonant with ribbits were silent. Nothing about the habitats had changed, save for their sudden, inexplicable froglessness. No one knew what the problem was, let alone the culprit. “It was more than a search for a needle in a haystack—we were still debating the existence of the haystack,” Lips wrote recently. Steele’s analysis shows that by the point the fungus was finally identified, in 1998, it had already done the brunt of its lethal work. At least 60 species were already extinct, and hundreds more were going south.

Bd is perhaps the perfect frog killer. It kills with gusto and without fuss. While some diseases affect only specific hosts, Bd covets nutrients found across amphibian skins, and so targets the entire group indiscriminately. It spreads easily through the water, and it persists outside its hosts.

The fungus hasn’t acted alone; humans have been its unwitting accomplice. A genetic study led by Matthew Fisher from Imperial College London suggested that Bd had originated somewhere in Asia. From there, one especially virulent and transmissible strain spread around the world in the early 20th century—a time when international trade was booming. Infected animals could have stowed away aboard ships, or been deliberately transported as food, pets, or pregnancy tests. Either way, the killer strain eventually spread to five other continents.

In the new study, Scheele’s team compares the modern world to Pangaea—the single, epic supercontinent that existed at the dawn of the dinosaurs. It has long split up, but humans have effectively re-created it. For wildlife diseases, all the world is once again a single connected mass, easily traversed. For that reason, new fungal diseases seem to be emerging at an ever-increasing pace, affecting bats, snakes, salamanders, and more. “These fungi would normally have fried on a sailing craft across the Atlantic, but now they’re viable,” Scheele says. “We’re just able to move things around at higher speed and volume than we used to.”


Humans have also repeatedly sown islands with introduced hunters such as cats, rats, and mongooses, to the detriment of local fauna. In many ways, it’s more fitting to think about Bd as one of these introduced predators—and perhaps the most destructive that people have ever unleashed. “Cats have been a plague on biodiversity over generations, and they eat everything,” Scheele says. “And yet Bd, whose impact we have only been able to measure for decades, already far outstrips the cats and rats in terms of the species affected.”

The comparison is especially apt because once in a new place, Bd is hard to dislodge. A typical disease might cause an epidemic and burn out, only to be later reintroduced from a reservoir. But once Bd arrives, it doesn’t fade out, and it cannot be removed. Like rats on islands, it becomes a nigh-permanent fixture of the areas it invades.

Limiting its movements remains the best strategy, and that means curbing the wildlife trade. “Moving wildlife around the globe can and does have devastating consequences,”Rowley says. “There’s more awareness of the impact of invasive species like cane toads and rabbits, but this paper highlights that it may be the inadvertent hitchhikers—the parasites and pathogens we don’t see—that cause the most biodiversity loss.”

Encouragingly, the pace of decline has eased. Better still, 60 species have begun to show glimmers of recovery. But no one knows whether this means that frogs have managed to eke out an evolutionary truce with Bd, or whether further outbreaks are to come. That’s possible if the fungus makes it to Papua New Guinea—a thus far Bd-free stronghold that is heaving with amphibians. The virulent, globe-hopping strain has also hybridized with indigenous varieties, raising concerns that hybrids could behave unpredictably.

“There’s no obvious way to deal with this,” Lips says. Some researchers have set up captive-breeding programs to buy time for species in contaminated habitats. Others are looking at ways of manipulating the fungus, or breeding more tolerant frogs, or pairing the frogs with defensive bacteria, or relocating frogs to sites that are inhospitable to the fungus. None of these solutions is a silver bullet, and none is close to readiness. “It says a lot about the scary nature of the disease that even after intense, long-term collaborations we haven’t come up with a viable solution,” Lips adds.


We want to hear what you think about this article. Submit a letter to the editor or write to letters@theatlantic.com.

Ed Yong is a staff writer at The Atlantic, where he covers science.