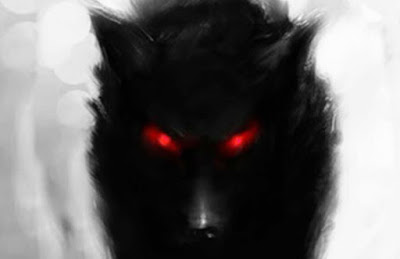 Once again we find another example of the giant sloth.  It shreds the game to set up a maggot farm.  That it his primary sustenance.  Obviously they typically den up in caves in particular and old sheds work as well.

All this conforms to what we have now extensively discovered to date.


My friends and I saw some sort of dog-like demon thing in eastern Iowa.

We were exploring this old house out in the country after dark, just looking around with maybe some mild vandalism. Well we had checked out the upstairs and most of the downstairs when I see a door that we hadn't been through yet.


I grabbed the door handle and suddenly had a feeling of dread come over me. I slowly pushed the door open and noticed that the room was slightly lit up with a dim red light that had no discernible source.


I got the door probably halfway open and heard an incredibly deep growl and saw the upper end of a dog thing, probably around the size of a German Shepard. It's teeth protruded past its upper and lower lips a rather significant amount, and it's stance was super hostile.

The thing that really scared me though was it's eyes, they were glowing red.


I noticed that there was blood and viscera all over everything, chunks of flesh and organs all over the floor and streaks of blood on the walls. The smell was overpowering.


I slammed the door and hightailed it out of there.


Here's the part where I'm an idiot. I went back about noon the next day. I had a huge knife with me when I went back to the door, and slowly grabbed the handle, but felt none of the dread from the night before. I pushed it open and I sh*t you not, this perfectly square, windowless room, was literally coated in blood and fur.


I could see what looked like 3 separate mutilated dog corpses. They weren't cut apart, they were shredded. I nearly threw up, shut the door, and left again. I'll never go back there again, especially after dark. - ER