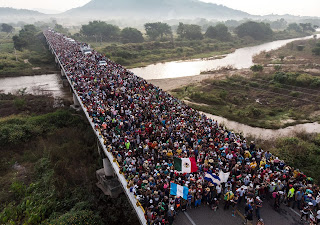 In fairness the Mueller act is completely over for the DEMs.  It is already wrapping fish.  However,  fallout will be stinging the DEMS for the next two years.  Yet that is what it is.

The policy front will be dominated by these two issues reported here and that is quite right. Both are a work in progress.  Seriously the immigration problem is been converted through numbers into a potential Barbarian Invasion and could well be intended.  The scale is already surprising and clearly deliberate.

I also think that election reform will soon dominate the conversion as well.  The conversation is already underway.

Because the issues that decided 2018 will shape 2020.
The Donald Dossier: Cutting Through This Week’s Noisy News With What You Need to Know
The president had some pep in his step this week. “Bullshit,” Donald Trump crowed to a roaring throng of fans in Grand Rapids, Michigan, on Thursday when speaking of the investigation into his 2016 campaign. The victory lap comes courtesy of a four-page summary of Robert Mueller’s much-anticipated report, which can be further condensed in Trumpworld to: “No collusion.”
Any revelations about his attempts to obstruct the investigation and other loose Russia-related ends in the full nearly 400-page report will have to wait on Attorney General Bill Barr, but a crippling blow to the president this was not. Even as Trump plans to turn the report back on his enemies and use it as a campaign cudgel — “This is not, ‘Oh, gee, it’s over. Let’s forget about it,’” attorney Rudy Giuliani told The Atlantic — its release did not represent an assured win in 2020 either. In fact, two non-Mueller developments were more telling on how the next 19 months will proceed.
First came Monday night, when Trump’s Department of Justice sought in a court filing to slay the entire Affordable Care Act, the great unfinished business of the Trump presidency.

Plaintiffs in the case, now before the fairly conservative Fifth Circuit Court of Appeals, argue that the tax reform law, which reduced the penalty for not having health insurance to $0, effectively kills the entire law because the Supreme Court only upheld it in 2012 as an exercise of Congress’ taxing power. While the case was brought by 20 Republican states, the Trump administration’s position had been that only certain restrictions on health insurers should be struck down. But the DOJ on Monday filed a brief saying it agreed with a lower court that the entire law now is invalid.
Trump is trying to rebrand the GOP as the “party of health care” and said a group of Republican senators would work on a replacement plan, but Senate Majority Leader Mitch McConnell wants no part of it, as the issue has turned into a Democratic strength.
Meanwhile, immigration is surging on the southern border. Overwhelmed officials in El Paso, Texas, are housing migrants in a tent under a bridge. At his Michigan rally, Trump decried the asylum seekers “trying to invade our country,” as his Army Corps of Engineers scouts terrain to start construction on several dozen miles of border walls. On Friday, he again threatened to shut down the entire Mexican border.
This is the issue on which Trump has staked his presidency, including the record-length government shutdown and controversial emergency declaration. However much of that “big, beautiful wall” he can construct will be a showpiece for his political base … but hyping high numbers of immigrants carries political risk too, especially if his big talk and tough policies (i. e., family separations) fail to stem the Central American tide.
At the same time, Democrats have little agenda here other than opposing Trump (it’s the health care inverse), so they’d rather talk about other things. On balance, border crisis headlines help Trump, while health care crisis headlines harm him. Those will continue, while Trump–Russia is likely to fade.
Barr’s and Mueller’s expected congressional testimonies will produce cable news meltdown events, as will the release of Mueller’s full report, which the attorney general has promised by mid-April. But impeachment appears to be all but off the table, which works to Democrats’ political benefit.
On the campaign trail, you’re not going to hear much about Vladimir Putin, but you will hear a lot about health care and immigration. Democrats won on this playing field convincingly in 2018 — hence the heartburn among the Capitol Hill GOP after the health care announcement. But projecting midterm results on a presidential race is a dangerous game.
The Republican polling firm 0ptimus released fresh 2020 numbers in conjunction with Firehouse Strategies this week, finding Trump trailing a trio of top Democrats (Joe Biden, Bernie Sanders and Beto O’Rourke) in head-to-head matchups in Wisconsin. But Trump virtually tied Biden and Sanders in Pennsylvania and Michigan, with decent leads over the lesser-known O’Rourke. This comes after Dems won Pennsylvania and Michigan with relative ease last fall.
The poll also looked at Obama–Trump voters, who have been dissected like a high school science class frog since 2016, finding them mostly sticking to the president — even before Mueller’s verdict came out. In all three states, more voters disapprove of the job he’s doing than approve, but Trump was unpopular in 2016 too. His approval numbers have been pretty steady since taking office, with low ebbs in the mid-30s in the second half of 2017, around the same time Republicans nearly repealed Obamacare.
Perhaps sometime around June 2020, Chief Justice John Roberts will strike the blow the late Sen. John McCain would not and end Obamacare, with a decision far more powerful — both in substance and politics — than anything Robert Mueller could write.
Posted by arclein at 12:00 AM