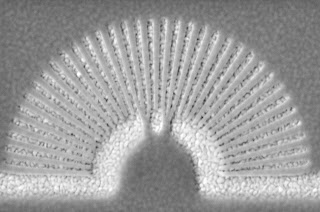 This represents a likely hundred fold improvement in optical resolution.   We will be able to look at useful particles very close to the all important world of zero to 100 nanometers were such particles can penetrate cells.


This technology is already at 250 nm.  Getting it down to five is not that far away and may even not be impossible with this protocol. None of this was slightly imaginable not too long ago.

Bravo.  We are so much closer.

The image (above) shows a metamaterial hyperlens. The light-colored slivers are gold and the darker ones are PMMA (a transparent thermoplastic). Light passes through the hyperlens improving the resolution of very small objects.

“There is a great need in health care, nanotechnology and other areas to improve our ability to see tiny objects that elude even the most powerful optical systems. The hyperlens we are developing is, potentially, a giant step toward solving this problem.”

BUFFALO, N.Y. – It looks like a Slinky suspended in motion.

Yet this photonics advancement – called a metamaterial hyperlens – doesn’t climb down stairs.
Instead, it improves our ability to see tiny objects.

Described in a research paper published today by the journal Nature Communications, the hyperlens may someday help detect some of the most lethal forms of cancer.

It could also lead to advancements in nanoelectronic manufacturing and boost scientists’ ability to examine single molecules – a development with implications in physics, chemistry, biology and other fields.

“There is a great need in healthcare, nanotechnology and other areas to improve our ability to see tiny objects that elude even the most powerful optical systems. The hyperlens we are developing is, potentially, a giant step toward solving this problem,” says Natalia Litchinitser, PhD, professor of electrical engineering at the University at Buffalo and the paper’s lead author.

Co-authors are Jingbo Sun, PhD, assistant research professor of electrical engineering at UB, and Mikhail I. Shalaev, a PhD candidate in Litchintser’s lab.

Conventional optical systems, such as microscopes and cameras, are limited by diffraction, a phenomena in which light bends as it passes around an edge or through a slit. An example of this are the closely spaced tracks of a DVD, which form a rainbow pattern when looking at the disk.

Diffraction sets a fundamental limit to the resolution of optical systems.

Scientists are working to solve diffraction with metamaterials, which are materials engineered to have properties not yet discovered in nature. Typically, the materials are arranged in repetitive patterns, often smaller in scale than the wavelengths of the phenomena they influence.

Metamaterial hyperlenses overcome the diffraction limit by transforming decaying evanescent waves into propagating waves. Once converted, the former decaying waves, which were commonly lost in conventional imaging, can be collected and transmitted using standard optical components.

Some of the first metamaterial hyperlenses consisted of tiny concentric rings of silver and dielectric (an insulating material). However, this design only works within a narrow range of wavelengths and it suffers from large losses of resonance.

Instead of concentric rings, UB researchers formed tiny slivers of gold and PMMA (a transparent thermoplastic) into a radial shape. The design of this metamaterial hyperlens, which looks like a Slinky suspended in motion, overcomes the diffraction limit in visible frequency range. Moreover, it can be integrated with an optical waveguide, opening the door to hyperlens-based medical endoscopes.

More studies are required, but such a tool could improve doctors’ ability to detect some of the most lethal forms of cancer, such as ovarian cancer.

For example, today’s high-resolution endoscopes can resolve objects to about 10,000 nanometers. The hyperlens could improve that to at least 250 nanometers or better. This is important because the earlier doctors are able to discover hard-to-find cancers, the more success they have treating the disease.

Another potential application centers on optical nanolithography, the process of passing light through a mask to a pattern on polymer film. Continuous improvement in this field is essential to building the next generation of optoelectronic devices, data storage drives, sensors and other gadgets.

The hyperlens also show promise in sequencing single molecules, a potential advancement with broad implications in numerous fields of research including physics, chemistry and biology.

The research was supported by grants from the U.S. Army Research Office and the National Science Foundation.
Posted by arclein at 12:00 AM