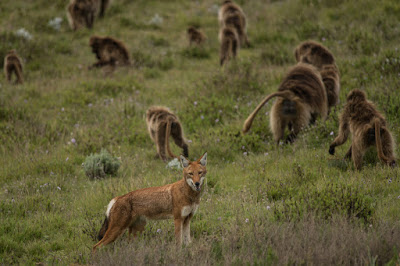 I am not convinced by this particular argument simply because no end of predators do work among herds when hunting other game.  The herd understand they are not been hunted and that is god enough.  That it can also be advantageous is merely a bonus here.


Real domestication took place because we chose to raise cubs and those cubs bonded with us.  That led swiftly in several generations to the transition to domestication which removes a number of traits no longer desirable and adds those that are unique to domestication itself.  We have repeated the process with some success with foxes although super sharp teeth make that tricky and unsustainable.


The wolves also know that they will be losers in a serious fight and that keeps them honest..

In the alpine grasslands of eastern Africa, Ethiopian wolves and gelada monkey are giving peace a chance. The geladas – a type of a baboon – tolerate wolves wandering right through the middle of their herds, while the wolves ignore potential meals of baby geladas in favour of rodents, which they can catch more easily when the monkeys are present.

The unusual pact echoes the way dogs began to be domesticated by humans.

When walking through a herd – which comprises many bands of monkeys grazing together in groups of 600 to 700 individuals – the wolves seem to take care to behave in a non-threatening way. They move slowly and calmly as they forage for rodents and avoid the zigzag running they use elsewhere, Venkataraman observed.

This suggested that they were deliberately associating with the geladas. Since the wolves usually entered gelada groups during the middle of the day, when rodents are most active, he wondered whether the geladas made it easier for the wolves to catch the rodents – their primary prey.

Venkataraman and his colleagues followed individual wolves for 17 days, recording each attempted capture of a rodent, and whether it worked. The wolves succeeded in 67 per cent of attempts when within a gelada herd, but only 25 per cent of the time when on their own.

Journal of Mammalogy Solitary Ethiopian wolves increase predation success on rodents when among grazing gelada monkey herds
Posted by arclein at 12:00 AM