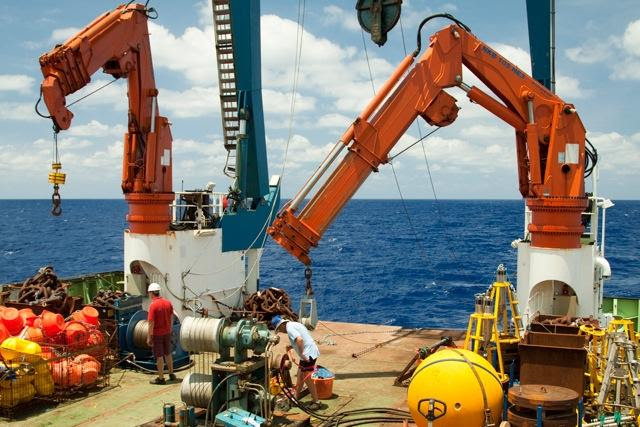 At least they are now looking in the right place and please observe that we are anticipating a half degree decline which neatly offsets the half degree rise that produced the global warming hysteria.

I also think that we are linked to a long cycle movement in the Southern Hemisphere that is possibly a thousand years long.  That would nicely explain the recurring severe cold spells centuries apart.  Fortunately for us we are still recovering from the last one so we have plenty of time to prepare.

I do agree with the prognosis but lacked the convincing mechanism.  It will take a couple more decades to serttle in so our good weather will last a while longer before the North freezes back up.

Better yet we now know clearly that the warm spell in the Medieval period clearly allowed the vikings to penetrate the Pacific through the Arctic with ease just as we can now..

A study, published in Nature, proves that ocean circulation is the link between weather and decadal scale climatic change. These findings, by scientists from the National Oceanography Centre (NOC) and the University of Southampton, imply that the global climate is on the verge of a broad-scale change that could last for a number of decades.

This study is based on observational evidence of the link between ocean circulation and the decadal variability of sea surface temperatures in the Atlantic Ocean.

The change to the new set of climatic conditions is associated with a cooling of the Atlantic, and is likely to bring drier summers in Britain and Ireland, accelerated sea-level rise along the northeast coast of the United States, and drought in the developing countries of the Sahel region. Since this new climatic phase could be half a degree cooler, it may well offer a brief reprise from the rise of global temperatures, as well as resulting in fewer hurricanes hitting the United States.

Lead author, Dr Gerard McCarthy, from the NOC, said: "Sea-surface temperatures in the Atlantic vary between warm and cold over time-scales of many decades. These variations have been shown to influence temperature, rainfall, drought and even the frequency of hurricanes in many regions of the world. This decadal variability, called the Atlantic Multi-decadal Oscillation (AMO), is a notable feature of the Atlantic Ocean and the climate of the regions it influences."

These climatic phases, referred to as positive or negative AMO's, are the result of the movement of heat northwards by a system of ocean currents. This movement of heat changes the temperature of the sea surface, which has a profound impact on climate on timescales of 20-30 years.

The strength of these currents is determined by the same atmospheric conditions that control the position of the jet stream. Negative AMO's occur when the currents are weaker and so less heat is carried northwards towards Europe from the tropics.

Therefore multi-decadal climatic changes, such as the one impending, can be predicted by measuring the strength of ocean currents using a network of sensors called the RAPID array. These sensors have been collecting data on the flow rate of the Atlantic meridonal overturning circulation (AMOC) for a decade.

Dr David Smeed, from the NOC and lead scientist of the RAPID project, adds: "The observations of AMOC from the RAPID array, over the past ten years, show that it is declining. As a result, we expect the AMO is moving to a negative phase, which will result in cooler surface waters. This is consistent with observations of temperature in the North Atlantic."

Since the RAPID array has only been collecting data for last ten years, a longer data set was needed to prove the link between ocean circulation and slow climate variations.

Therefore this study instead used 100 years of sea level data, maintained by the National Oceanography Centre's permanent service for mean sea level. Models of ocean currents based on this data were used to predict how much heat would be transported around the ocean, and the impact this would have on the sea surface temperature in key locations.

Co-author Dr Ivan Haigh, lecturer in coastal oceanography at the University of Southampton, said: "By reconstructing ocean circulation over the last 100 years from tide gauges that measure sea level at the coast, we have been able to show, for the first time, observational evidence of the link between ocean circulation and the AMO."

Professor Ian Wright, Director of Science and Technology at the NOC said: "This work clearly emphasizes the critical role of the ocean in driving decadal-scale changes in climate that has very real human consequences, as well as the continued need for long-term measurement of ocean change at critical sites around the world"

The sustained observations of the Atlantic overturning circulation, provided by the RAPID array, is a major strategic investment by the Natural Environment Research Council (NERC) and US funding bodies, to observe key climate variables.
Posted by arclein at 12:00 AM