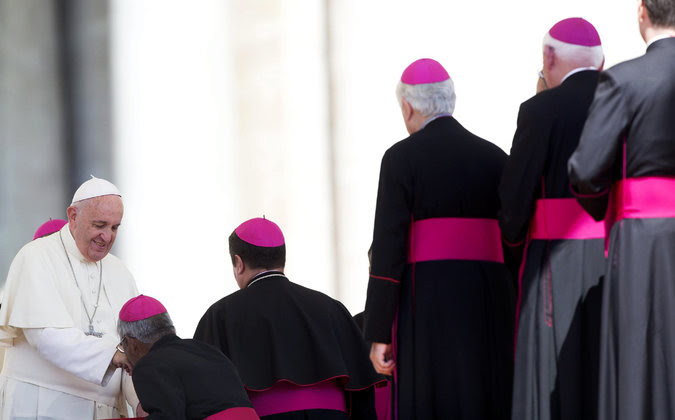 This is a positive development that will establish protocols and also discipline failure. Unwilling or not, the Catholic Church has found itself in the lead in tackling the particular problem of adults using authority to satisfy aberrant sexual and behavioral needs.   That it was sadly vulnerable is obvious to all even though the actual numbers were no different throughout society itself.
The majority of all cases occur inside the family and that remains mostly untackled.  The church can do sensible things to prevent and manage a problem like this and other organizations can follow suite.  Schools have proven to be just as vulnerable as we read headlines of female teachers  carrying on with young men like it is party time.   The solution there is to sharply increase the age gap.  All this is humiliating for administrators and as with the Bishops, it is easiest to hide.
Our civilization is transitioning from a semi literate community to a far more sophisticated media centered virtual community with traditional vulnerabilities no longer accepted.  Boys and Girls were used often in that world.  Changing the culture has well begun.
.
Pope Creates Tribunal for Bishop Negligence in Child Sexual Abuse Cases


ROME — Pope Francis has approved the creation of a Vatican tribunal for judging bishops accused of covering up or failing to act in cases of child sexual abuse by priests, an unprecedented step long demanded by victims in the more than three decades that the Roman Catholic Church has publicly dealt with the abuse scandal.


Bishops, regarded as “princes of the church” and sovereign in their dioceses, until now could be disciplined only directly by the pope, but until Francis, no pope had publicly confronted or demoted even those bishops accused of gross negligence. Under Francis’ predecessors — Pope Benedict XVI and, before him, John Paul II — the Vatican defrocked about 850 priests for sexual abuse and penalized about 2,500 more, but there was no similar judicial mechanism for bishops.


Advocates for abuse victims had a range of reactions, from skepticism to watchful optimism.


Francis’ move could affect bishops around the world as awareness of sexual abuse and calls for accountability spread, even to the church in Latin America, Asia and Africa, where the topic is still largely taboo.

Papal Responses to Sexual Abuse in the Church


A tribunal set up by Pope Francis is the Vatican’s first mechanism to discipline negligent Roman Catholic bishops, rather than abusive priests.


It will also bring new scrutiny to a number of bishops currently under investigation over accusations that they covered up abuse by priests. They include Archbishop John C. Nienstedt of Minneapolis and St. Paul, whose archdiocese was indicted last week; Cardinal George Pell of Australia, the head of the Vatican’s finances, who was recently called to testify by a government commission in Australia; and Bishop Robert W. Finn of the Diocese of Kansas City-St. Joseph in Missouri, who was convicted on a misdemeanor charge for negligently handling a case involving a pedophile priest. He resigned his post recently but remains a bishop.


A mechanism for holding bishops accountable has been a high priority of the 17-member papal commission on abuse that was also created by Francis. That commission includes two abuse survivors and many laypeople, and it is headed by Cardinal Sean P. O’Malley, the archbishop of Boston, who was sent to Boston at the height of the abuse scandal there, and to two other dioceses before that, to clean up scandals left behind by previous bishops.


There are many unanswered questions as to how the tribunal will conduct its inquiries and proceedings, including what punishments it would impose on bishops found guilty.


Peter Saunders, one of the two abuse survivors on the commission, said he was pleased that Francis seemed to be listening to their recommendations but said, “When allegations against senior clergy are brought to the tribunal, we’ll see whether it’s working.”


The United States Conference of Catholic Bishops, in St. Louis for their semiannual meeting, said they had no advance knowledge of the creation of a new tribunal. (Among those attending the meeting was Archbishop Nienstedt.) In interviews, bishops said that they welcomed the step as a move toward transparency and would cooperate fully.


“It’s something new and necessary in the church because it does provide a standard and a policy that holds bishops accountable in the way we’ve held our clergy accountable,” said Bishop Christopher J. Coyne of Burlington, Vt., who was a spokesman in the archdiocese of Boston at the height of the scandals there in the early to mid-2000s.


The five-point plan announced on Wednesday says the tribunal will be housed in the Congregation for the Doctrine of the Faith, the Vatican office that polices adherence to church doctrine and that already handles the cases of priests accused of abuse.


Francis will choose a secretary, and additional permanent staff members will be hired for the tribunal, said the Vatican’s chief spokesman, the Rev. Federico Lombardi. The procedures will be re-evaluated in five years, he said.


Father Lombardi said the tribunal would also examine some of the abuse cases perpetrated by clergy members that were “still pending” at the Congregation for the Doctrine of Faith. “They are still very numerous and have accumulated,” he said. The tribunal will “accelerate” matters, he said, noting that money had been set aside to bolster the new section.


Father Lombardi said that the tribunal’s responsibility for judging bishops would include questions of omission: “what one should have done and didn’t do,” he said. “This is another kind of responsibility and shortcoming, and has to be judged in an appropriate way with appropriate rules.”


Barbara Blaine, president of the Survivors Network of Those Abused by Priests, a support and advocacy group for victims, said in a statement that she suspected that the new panel “won’t make a difference” because it relies on church officials to judge other church officials. She said that a more effective move would be for the church to support the reform of secular laws to strengthen the prosecution of those responsible for abuse.


Voice of the Faithful, a church reform movement first created to respond to the abuse scandal, said, “These steps are the most promising the Vatican has yet taken.” Terence McKiernan, president of BishopAccountability.org, a Boston-based group that documents cases of sexual abuse by priests, called the development encouraging because it “provides a structure, personnel, a budget and a brief for actually acting.”


In the United States, where the church has been struggling with the question of sexual abuse by members of the clergy since the first case of serial abuse became public in Louisiana in the 1980s, the problem remains far from resolved.


Last year, there were 37 allegations of sexual abuse made to the church by those who were currently minors, and another 600 “historical allegations” made by those who are older, said Francesco C. Cesareo, chairman of the United States bishops conference’s National Review Board on sexual abuse, in his report to the bishops on Wednesday. Six of the current allegations made last year were substantiated, and other cases were still open, he said.


Given that, he said, “it should not be concluded that the sexual abuse of minors is a problem of the past that has already been addressed.”


“This is the missing link in the church’s response to the abuse crisis,” said the Rev. James Martin, a Jesuit priest and editor at large of the Jesuit weekly magazine America. “It is a long overdue and delayed response to this problem, but it’s an absolutely indispensable step. This is what everyone was waiting for and all were calling for in all quarters of the church.”


Father Martin suggested that action had been slow to come because there was a “lingering reluctance to hold bishops accountable if they themselves had not committed the abuse” and because, after the Second Vatican Council shifted greater power from Rome to the bishops, of “the traditional authority of bishops over their dioceses.”
Posted by arclein at 12:00 AM