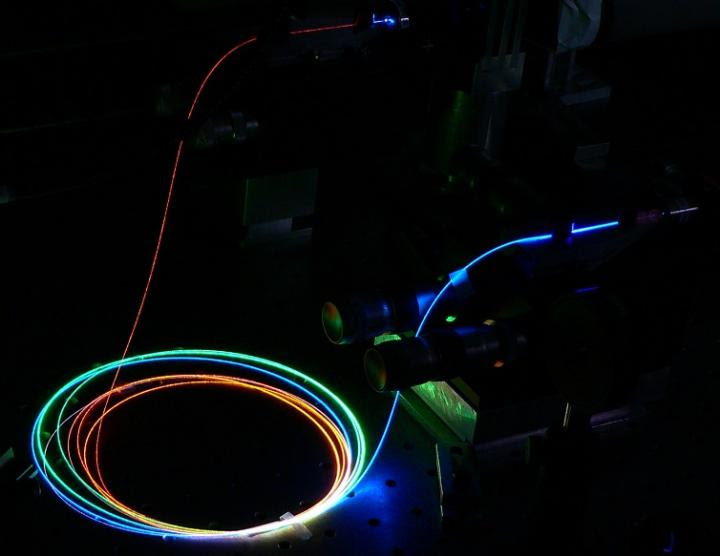 This is very intriguing and it looks to be important commercially.  I suspect that the future of modern physics will tend more and more into optical methods.  This is showing us how to manipulate materials and light to provide complex solutions.


Optics is both simple and sophisticated enough to challenge everyone.

The supercontinuum generation is in an optical fiber. The input is composed of infrared pulses, and the output includes practically the whole visible spectrum. Image courtesy of Dimitris Papadopoulos.

A group of scientists from the Lebedev Physical Institute of the Russian Academy of Sciences, Moscow Institute of Physics and Technology and Moscow State University recently presented their research into the process of laser pulse filamentation - the effect produced when a laser beam propagating in air focuses into a filament. The researchers discovered how this process influences the preliminary transition of a beam passing through quartz glass, which has applications in the field of nonlinear optics.

Light propagates in straight lines, and beams of light are only reflected or refracted to the side when the properties of the medium it is passing through change. This is the basis of linear optics: it is called 'linear' because the division of electric charges that occurs when light passes through a medium is linearly dependent on the intensity of the fields in the light wave itself. In other words, the stronger the electric field, the more the different charges are dispersed within the material - the material becomes polarized.

Ordinary light is a mixture of waves having different polarizations, and lasers, as a rule, produce polarized beams, a set of similarly orientated waves.

However if the light is very strong, then its influence on materials cannot be described by these simple rules. At the microscopic level, the picture of the displacement of electric charges in substances under the influence of an electromagnetic field changes, but at normal scales light begins to behave in strange ways. The beams, instead of dispersing in different directions and dissipating, begin to gather into narrow strands, or as optics researchers call them, filaments. Light can even make substances change color - an effect known as supercontinuum (that is, white light in which lights of different colors are mixed) and harmonic generation.

Only lasers provide a sufficiently strong light (more accurately, beam intensity) capable of producing nonlinear effects. When these light sources were first made, nonlinear optics began to develop quickly, but even today not all nonlinear optical effects are fully researched. In particular, filaments have been actively researched since the sixties, but there is still no complete theory that describes their characteristics in different conditions.

Atmospheric composition, beam intensity, wave length polarization and a multitude of other factors affect the formation of filaments. Real optical assemblies usually consist of a variety of different elements, and each of them, whether the mirror, lens, or even simple glass plates, can change the picture quite radically. In the new research, which is discussed in detail below, the scientists investigate the process of laser pulse filamentation.

The experiment and results Nonlinear optical effects can be studied only with very large intensities. So large, in fact, that they can only be produced with powers in the gigawatt range - consequently, for experimental research, it is necessary to achieve a very short pulse. So, if a pulse with a combined energy of 2.2 millijoules is compressed to a hundred femtoseconds (10 to 13 seconds), then the power of the beam will be more than 20 gigawatts.

And if this beam is also focused into a speck with a three millimeter diameter, then we get an intensity of light an order higher than the intensity of light close to the sun's surface, which has a radiation power of about 20 gigawatts a square meter.

The dimensions outlined in the previous paragraph are those used in the experiment conducted by the researchers from MSU, MIPT, and the Lebedev Institute. The experimental group, under the leadership of Andrei Ionin, head of the Laboratory of Gas Lasers, consisting of staff members Darya Mokrousova, Leonid Seleznyov, Elena Sunchugasheva and Anna Shustikova, used a Ti:sapphire pulse laser.

The beam is focused using a spherical mirror and passes through a quartz glass plate and is directed towards two ring electrodes that are held at 300 volts. When the laser pulse has ionized the air, a current begins to pass between the electrodes and, as a result, the physicists are able to assess the appearance of the plasma clusters formed under the influence of the light that has formed into filaments.

After analyzing the shape and size of the filaments thus formed, the researchers changed the quartz plate through which the light passed before it was focused. It appeared that changing the thickness of the transparent plate affected not only the length of the plasma channel, but also the distance at which it arose.

By focusing the laser beam using a lens with a focal point of 230 cm in the absence of a quartz plate, the laser beam formed at a distance of 150 cm, introducing a 4.5 mm plate caused the formation of plasma filaments to be brought nearer by 40 cm, and by increasing the thickness of the plate to 10.5 mm, the distance to the start of the plasma was reduced by almost 85 cm. In addition, the length of the plasma produced increases with an increase in the thickness of the quartz plate.

Quantitative modeling of the experiment conducted by the MSU research group consisting of Valery Kandidov, Svyatoslav Shlenov and Alexander Dergachev revealed a strong correlation with the experiment itself. A detailed report on the behavior of the laser filaments was published by the physicists in the journal Laser Physics Letters.

Why is this needed? Earlier, the Laboratory of Gas Lasers at Lebedev demonstrated that such lasers can be used for many different tasks, from the etching of diamonds to medical operations, as beams concentrated into fine filaments enable more precise interactions with different materials. However, in practice, real optical systems rarely consist of just one laser. They can also include mirrors, lenses and transparent windows that are used to enclose the technological space used for processing materials.

The new research has shown the even transparent plates made of quartz glass can significantly alter the laser filaments, an effect that leads to an improvement in the precision of material processing or a correction to the distance at which the power of the laser beam is delivered.
Posted by arclein at 12:00 AM