The Invisible Key to Methane Hydrates 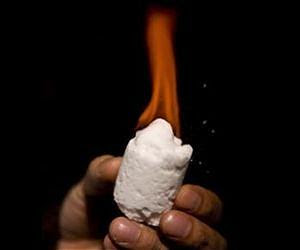 This identifies an interesting possibility.  it may be possible to induce nano bubbles and thereby speed up the formation of the hydrate itself.

This would provide a nifty storage and transportation option clearly superior to present options.

This is one of those potential options that you can actually see and feel while stymied in every way possible to actually exploit.  Sort of reminds me of the original efforts to produce usable nitrogen.

Even then, hydrates remain a comparably recent discovery and actual usage will easily survive even free energy itself.  Any form of methane remains just too convenient even as a heating option and i would sooner tote a canister of hydrates than a canister of propane.  I know one is a perfectly good bomb.
.


The invisible key to methane hydrates

This image shows a methane hydrate being subjected to heat

Like the carbon dioxide in a fizzing glass of soda, most bubbles of gas in a liquid don't last long. But nanobubbles persist. These bubbles are thousands of times smaller than the tip of a pencil lead - so small they are invisible even under most optical microscopes - and their stability makes them useful in a variety of applications, from targeted drug delivery to water treatment procedures.

Now a team of Canadian researchers from the University of British Columbia and National Research Council of Canada is studying the role that methane nanobubbles might play in the formation and dissociation of natural gas hydrates - crystalline lattices of hydrogen-bonded water molecules with gas molecules nestled between.

Hydrates are a currently untapped source of natural gas, one of the chief energy sources in the United States. Gaining a better understanding of how nanobubbles impact their formation and dissociation could help design procedures to more efficiently and safely harvest hydrates for natural gas capture. The findings are published this week in The Journal of Chemical Physics, from AIP Publishing.

Naturally-occurring methane hydrates, hidden deep under the sea floor or tucked under Arctic permafrost, contain substantial natural gas reserves locked up in a form that is difficult to extract. When these hydrates decompose (with the injection of heat or depressurization), the gas inside is liberated and can then be used for energy.

Whether, and how, to take advantage of this resource is a complicated question. Hydrates have shaped the history of our planet: by locking away methane produced in the earth's crust instead of allowing it to accumulate in the atmosphere, they helped to make the earth a hospitable place for life.
Their role in this regard continues today - while the methane trapped in hydrates is a potential source of future energy, it may also serve as a potent source of greenhouse gas if it escapes into the atmosphere. Thus, in order to extract methane without contributing to climate change, understanding the precise mechanics of the hydrate decomposition process is crucial.

The researchers used molecular dynamics simulations to model the solid hydrates' decomposition into liquid and gaseous states. Whether or not nanobubbles formed during decomposition was influenced, among other factors, by the temperature - higher heat made the hydrate dissociate more quickly. When methane was released from the hydrate into the liquid state faster than it could diffuse out, it became supersaturated and formed nanobubbles.

"If the decomposition of the methane hydrate phase is fast enough, which depends on temperature, the methane gas in the aqueous phase forms nanobubbles," said Saman Alavi, one of the lead researchers on the project.

Alavi, along with colleagues A. Bagherzadeh, J. A. Ripmeester and P. Englezos, also briefly studied the other side of the process: hydrate formation. Because they are stable under relatively mild conditions, hydrates could be a potential means to safely transport flammable gasses. But in nature, methane hydrates can take years to form.

That's where the nanobubbles come into play: through their simulations, the researchers found that if temperature and pressure conditions were favorable for hydrate formation, methane nanobubbles in the aqueous solution sped up the rate at which the hydrate formed. "Nanobubbles may bring more methane into contact with water and enhance hydrate formation efficiency," said Alavi.

Separately, these findings provide insight into nanobubble dynamics that could allow researchers to take advantage of the unique properties of hydrates.

Taken together, they also provide a potential explanation for the so-called memory effect - the fact that "aqueous solutions in contact with methane form solid methane hydrate at a much faster rate if they have already undergone a methane hydrate formation-decomposition cycle," said Alavi, almost as if the hydrate "remembers" its previous state.

Nanobubbles might explain why. If a hydrate dissociates fast enough, it leads to the formation of nanobubbles. If these bubbles persist, they could hasten the formation of future hydrates by providing sites for nucleation.

Next, the researchers plan to more thoroughly investigate the composition and long-term fate of nanobubbles resulting from hydrate decomposition.

The article, "Formation of methane nano-bubbles during hydrate decomposition and their effect on hydrate growth," is authored by S. Alireza Bagherzadeh, Saman Alavi, John Ripmeester and Peter Englezos.
Posted by arclein at 12:00 AM