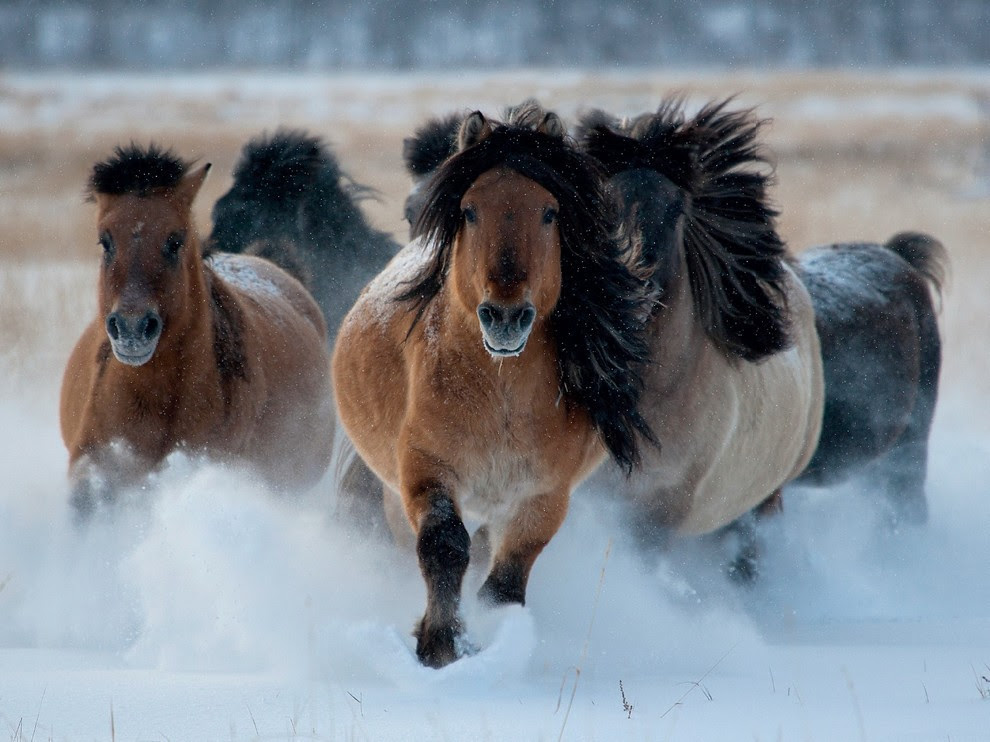 A little unexpected and also a lucky find. Yet it is not surprising either.  The Chilcotin is a huge land of forests and bitter cold weather that has not attracted serious settlement beyond ranching.  Importing or buying a Siberian pony herd make just too much sense and someone obviously did and they ran wild and interbred with the also well adapted Canadian horse.  It may have been done deliberately but it would have made little difference.
Since they are wild, I expect that the herds will grow to a serious size if not already.  They live in a green ocean that can easily hide millions.  It is also grizzly country with a scant human presence.

It was never significantly populated by Natives either who relied on the fishery first.
.

A genetic study of the wild horses of B.C.’s Chilcotin region is offering a new and surprising explanation of their origins.

The study found that while it is possible other wild horses encountered in B.C. by early Europeans were descendants of those introduced by the Spanish to the Americas in the early 1500s, new DNA tests on wild horses of the Chilcotin’s Brittany Triangle show no link to those ancient herds.

Rather than being related to the Spanish breeds, which were assumed to have worked their way northward up the continent through trading, the small B.C. herd showed strong ties to the Canadian horse — a unique breed to Canada that had its origins in France — and, to a lesser extent, the Yakut horse from Russia’s eastern Siberia.

The remote 155,000-hectare Brittany Triangle is a large plateau and mountainous area about 120 kilometres southwest of Williams Lake. The 150 to 215 horses living in the area are considered to be the most isolated of the approximately 1,000 wild horses in the entire Chilcotin.

“This population gives evidence that it is isolated,” confirmed Gus Cothran, lead author of the study and an authority on horse genetics with the Department of Veterinary Integrative Bioscience at Texas A&M University. “It has not had a lot of input in recent times.”

The study’s co-author is Wayne McCrory, a West Kootenays biologist who worked on behalf of Valhalla Wilderness Society, Friends of Nemaiah Valley, and the Xeni Gwet’in First Nation. "The results pose more questions than they answer,” he said.

The forerunners of today’s domestic horse evolved in North America but disappeared from the continent about 8,000 to 10,000 years ago, the study states.

Explorer Alexander Mackenzie did not record the presence of horses when he travelled on foot through the region to the Pacific Ocean at Bella Coola in 1793, but Simon Fraser did in 1808 when he explored what would become the Fraser River.

Parliament officially recognized the Canadian horse as the national horse of Canada through legislation in 2002. King Louis XIV of France shipped the horses from his own stables in the mid-17th century to help with the settlement of New France, the North American colony. Their reputation for strength also made them popular as a military horse, and they were used to haul artillery into battle. The Canadian horse is related to heavy breeds such as Belgian, Percheron, Breton and Dales Pony, and may have contributed to development of the Morgan in the U.S. From its small foundation, the Canadian horse flourished to an estimated 30,000 animals by 1784, but today numbers only about 2,500.

“It’s a rare breed now,” Cothran said in an interview Monday. “The fact that (Chilcotin horses) show resemblance to those may well indicate that some of the first European horses to get into that area were, in fact, from eastern Canada rather than from the U.S.”

The Yakut is a smaller, compact horse with short wide feet adapted for living above the Arctic Circle. It has a thick mane, tail and very hairy winter coat.

“That was surprising,” Cothran said of the discovery. “The Yakut is a very odd breed. The females do not have external nipples because they would freeze off. The foals just have to press their mouths up against the breast tissue area on the females to nurse.”

How did Yakut DNA get into the wild horses of the Chilcotin?

Aboriginal trades routes have long connected the Chilcotin to the coast, raising the prospect of acquiring Yakut horses from Russian fur-trading settlements along what is today the Alaska Panhandle bordering northwestern B.C. In 1867, Russia sold Alaska to America.

The problem is, the study found “very little evidence” to support such a theory.

McCrory noted: “We have one First Nations oral report of a band of Shetland pony-sized horses that once lived on the east side of the upper Taseko (outside the Brittany) that were shot off by a forest-service control operation.”

Chief Roger William of the Xeni Gwet’in said his people historically traded far and wide, so it is difficult to say exactly where the first horses arrived from.

What he does know is that horses soon became integral to his people, including for hunting, recreation, business, and travel. “That was our vehicle,” he said, noting his people maintain an aboriginal right to capture them as needed. “Until I started going to school, I thought horses had been with us forever.”

And while aboriginal use of horses diminished with the advent of motor vehicles, that is beginning to change again, especially among younger people. “Now it’s coming back again,” he said.

The Yakut horse requires further study, including more hair samples shipped over from Siberia. Cothran said another option is to conduct “whole genome sequencing” on all three of the horse types to gain a more specific understanding of their genetic history.

The study involved 99 hair samples obtained within the Brittany Triangle, and analysis of both microsatellite markers and mitochondrial DNA (inherited only through the mother). Of the samples analyzed, about “60 to 70 per cent” resembled the Canadian horse, compared with about “10 per cent” the Yakut, he said.

Microsatellites are short segments of DNA that have a repeated sequence marker, while mitochondria are structures within cells that convert the energy from food into a form that cells can use.

Earlier genetic research based on eight blood samples from Brittany wild horses did find evidence of “old-Spanish” ancestry, something the latest DNA testing did not. “It’s very rare in any horse breeds today,” Cochran said. “It suggests there was at least some Spanish there.”

The Chilcotin people may have acquired horses through trading as early as 1740, the study suggested.
Posted by arclein at 12:00 AM