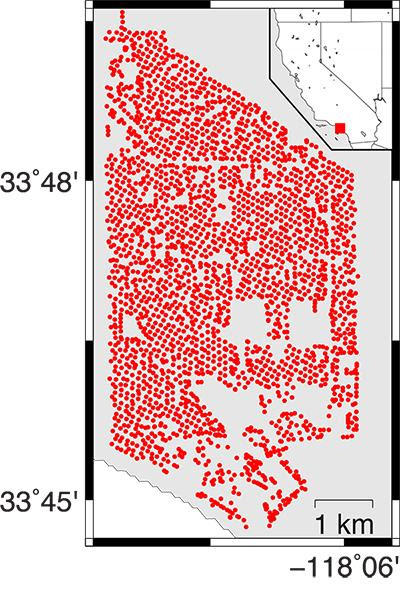 This will be hugely important in the oil industry.  Two forms of seismic working together will be able to produce an actual three dimensional picture that may even be accurate.    The limitation for the oil industry is that it remains shallow.

However that is not true for mining.  This type of combined seismic may actually make it useful.   Tight mapping of faults and density changes do matter in exploration drilling.  It strikes me that this system can be tuned wonderfully to map lode deposits to a high level of resolution which has been missing.

Extending to depth may still take a more active approach to produce noise.
.

This is a coverage map of the the seismic wave sensors in Long Beach that the researchers drew upon for their study.

A new technique developed at Stanford University harnesses the buzz of everyday human activity to map the interior of the Earth. "We think we can use it to image the subsurface of the entire continental United States," said Stanford geophysics postdoctoral researcher Nori Nakata.

Using tiny ground tremors generated by the rumble of cars and trucks across highways, the activities within offices and homes, pedestrians crossing the street and even airplanes flying overhead, a team led by Nakata created detailed three-dimensional subsurface maps of the California port city of Long Beach.

The maps, detailed in a recent issue of the Journal of Geophysical Research, marks the first successful demonstration of an elusive Earth-imaging technique, called ambient noise body wave tomography. "It's a technique that scientists have been trying to develop for more than 15 years," said Nakata, who is the Thompson Postdoctoral Fellow at the School of Earth, Energy and Environmental Sciences.

The subsurface maps were created by applying a new signal processing technique to a particular type of seismic waves - energy waves that travel across the Earth's surface and through its interior. Seismic waves can be generated naturally, during earthquakes and volcanic eruptions, for example, or by artificial means such as explosions.

There are two major types of seismic waves: surface waves and body waves. As their name suggests, surface waves travel along the surface of the Earth. Scientists have long been able to harness surface waves to study the upper layers of the planet's crust, and recently they have even been able to extract surface waves from the so-called ambient seismic field. Also known as ambient noise, these are very weak but continuous seismic waves that are generated by colliding ocean waves, among other things.
Body waves, in contrast, travel through the Earth, and as a result can provide much better spatial resolution of the planet's interior than surface waves. "Scientists have been performing body-wave tomography with signals from earthquakes and explosives for decades," said study coauthor Jesse Lawrence, an assistant professor of geophysics at Stanford. "But you can't control when and where an earthquake happens, and explosives are expensive and often damaging."

For this reason, geophysicists have long sought to develop a way to perform body wave tomography without relying on earthquakes or resorting to explosives. This has proven challenging, however, because body waves have lower amplitudes than surface waves, and are therefore harder to observe.
"Usually you need to combine and average lots and lots of data to even see them," Lawrence said.

In the new study, the Stanford team applied a new software processing technique, called a body-wave extraction filter. Nakata developed the filter to analyze ambient noise data gathered from a network of thousands of sensors that had been installed across Long Beach to monitor existing oil reservoirs beneath the city.

While experimenting with different types of filters for parsing and analyzing ambient noise, Nakata came up with an idea for a filter of his own that focused specifically on body waves. "When I saw the Long Beach data, I realized I had all of the pieces in my hand to isolate body- wave energy from ambient noise," Nakata said. "I was excited, but at the same time I was skeptical my idea would work."

The filter Nakata developed and then refined with help from his Stanford colleagues represents a new way of processing the ambient noise by comparing each observation to every other observation, which boosts the body-wave signal while reducing the noise.

Using its filter, the team was able to create maps that revealed details about the subsurface of Long Beach down to a depth of more than half a mile (1.1. kilometers). The body-wave maps were comparable to, and in some cases better than, existing imaging techniques.

One map, for example, clearly revealed the Newport-Inglewood fault, an active geological fault that cuts through Long Beach. This fault also shows up in surface-wave maps, but the spatial resolution of the body-wave velocity map was much higher, and revealed new information about the velocity of seismic waves traveling through the fault's surrounding rocks, which in turn provides valuable clues about their composition and organization.

"This has been something of a holy grail in Earth imaging, and Nori's work is a first-of-its-kind study," said geophysicist Greg Beroza, the Wayne Loel Professor at Stanford, who was not involved in the study. "His groundbreaking achievement is sure to be widely emulated."

Lawrence says the real power of the new technique will come when it is combined with surface wave tomography. "Primary waves, which are a type of body wave, are sensitive to compressional forces, whereas surface waves are more sensitive to shear, or sliding, forces," Lawrence said. "To characterize the subsurface properly, one must measure both shear and compressional properties. Using one wave type and not the other is like trying to study a painting by looking at it through a frosted window."

Now that ambient-noise body wave tomography has been shown to work, Nakata says he plans to apply his technique to much larger test areas.
Posted by arclein at 12:00 AM