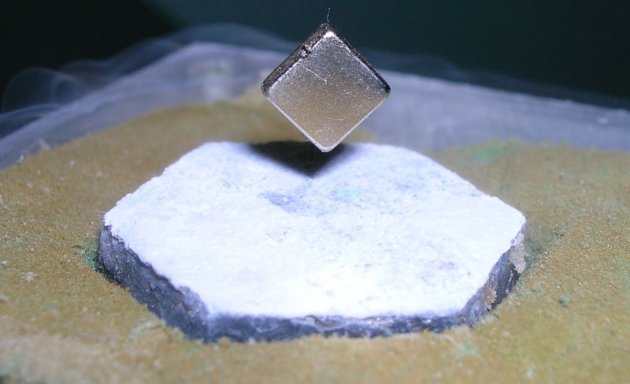 This is very interesting.  At these scales everything behaves differently.  Scaling up is the real challenge then.

A more correct change of state will come about when we learn to alter the position of neutrons and protons in atoms.  I suspect that this happens and has never been properly recognized or understood.

Again a hidden revolution is taking place in empirical physics as we master the nanoscale world..

Discovery of new state of matter may lead to superconductor revolution

Scientists appear to have discovered a new, exotic state of matter and hopes are high that it may one day help revolutionize superconductor technology.

The Japanese-led international team of researchers came up with the new-found matter, which they are calling a Jahn-Teller metal, that surprisingly simultaneously shows characteristics of a magnet, insulator and a superconductor that works at relatively high temperatures.

While we may be familiar with states of matter all around us like solid, liquid and gas (and even plasma) there are a whole slew of weird man-made alternatives that have been discovered in recent decades like supercritical fluids, condensates and degenerate matter, just to name a few. All of these are defined by changes in their temperature, heat capacity and pressure and are not found normally in nature but instead made in the laboratory.

This latest discovery, recently published in the online journal Science Advances, involves something called buckyballs, a pure carbon-lattice that has a spherical molecular structure and looks much like a soccer ball and inherently has superconductivity capabilities. Researchers discovered that when these buckyballs were combined with the metal rubidium, a never-before-created state of matter was made that had both metallic and crystalline structure with enhanced superconductive powers.

“Using chemistry we have made new solid materials which make electrons, one of the fundamental components of matter, behave in new and unexpected ways,” said co-author of the study, chemist Matthew Rosseinsky from the University of Liverpool, in an interview with Yahoo Canada News.

“This is important because it is related to superconductivity, the transmission of electricity without resistance – by understanding superconductivity in more detail, we can develop new families of higher temperature superconductors for applications ranging from healthcare (MRI) to energy storage, energy transmission and quantum computing.”

Superconductivity — where electricity is a able to flow with no resistance–has been found in some materials at extremely low temperatures- close to absolute zero or -270 degrees Celcius. High-temperature versions, like this new-found Jahn-Teller metal are capable of conducting electricity without resistance at record high temperatures, higher than the boiling point of liquid nitrogen. Because of these exciting characteristics, they may represent one the best candidates yet to advance current superconductor technology.

“There are practical superconductors already – superconducting magnets are used in Magnetic Resonance Imaging (MRI) in healthcare and there are many candidate applications such as magnetic energy storage and power transmission, as well as quantum computing,” said Rosseinsky.

“These applications will be realized as higher temperature superconductors are discovered – this is the driving force for future research in this area.”

Superconductors were first discovered over 100 years ago and they have been used in modern technology, most heavily in making electromagnets like those used in next-gen high speed  trains. Just last month Japan tested its maglev (magnetic levitation) train which broke a world speed record at over 600 km per hour with the help of superconducting magnets.

The fact that all the current superconductors in use today need to be cooled to ridiculously low temperatures makes them very expensive to use. By discovering new types that can operate closer to room temperatures, their use may become more inexpensive, and in turn more universal.

“Scientists are always looking for new states of matter which might give birth to superconductors that operate at more practical temperatures. Now this team seems to have discovered a new state of matter which transitions to the superconducting state,” explained Elisabeth Nicol, physicist at University of Guelph, who is not part of the study.

“So the holy grail is to find superconductors which operate at higher temperatures and this Jahn-Teller metal is a new state of matter that is a cross between an electrically-conductive metal and an electrical insulator…and it will surely pave the way to developing new materials, leading to new discoveries.”

Rosseinsky and his team realize that for now this is just a proof of concept, but they are going to try and find this new state of matter in other classes of material, which may very well lead to entire new families of superconductors.

“It’s an exciting time for superconductivity research, because there are many families of superconductors with interesting and useful properties, which we do not completely understand – this means new theoretical research is needed, and that there are new families of materials to be discovered with better properties.” he said.

“Having a new electronic state like the Jahn-Teller metal opens up new ways to find higher temperature superconductors in future.”
Posted by arclein at 12:00 AM