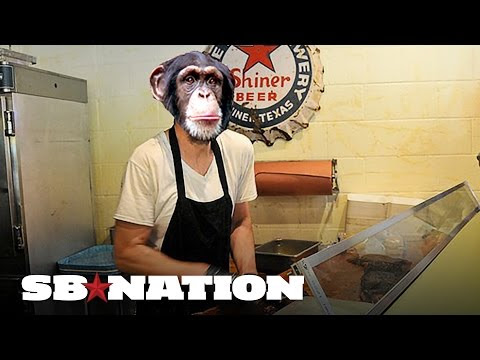 Good lord!  get a grip already.  Set up a simple gas range that cannot be easily broken and provide a cast iron fry pan.  show them a couple of times and then get out of the kitchen and observe.  After they learn the obvious lessons they should do fine.
It may take a couple of tries but having chimps cooking up their own food will teach us more about chimp cognition than a thousand rat trials which is what is described here.

The animals do mature into adept tool users who only need a hint to catch on.  Treat them right and we may even succeed in a better level of communication.  Perhaps we can sell them raw sweet potatoes in exchange for picking coconuts.  That would work for us wonderfully and even secure a life way for millions of chimps.  And just why are we not using chimps to pick coconuts?

While we are at it we can teach them how to count money.  This is all not terribly difficult and they are tractable..

No more raw food diet? Chimps can cook, and would, if they had tools (+video)

The discovery could shed light on the pace at which cooking emerged among humans' early ancestors, according to scientists.

Raw slices of white sweet potato may not be haute cuisine, but chimpanzees can quickly learn to cook them, according to a new study. Chimps also show a preference for cooked food and are willing to save the sweet potato chips until they can be cooked.The discoveries, detailed in the latest issue of the British journal Proceedings of the Royal Academy B, could shed light on the pace at which cooking emerged among humans' early ancestors, according to the scientists conducting the study.


Some hold that cooking emerged long after early ancestors harnessed fire for light and heat. Others theorize that cooking probably came soon after these ancestors learned to control fire.


Exactly when fire was tamed is still open to debate. Some have argued that roughly 2 million years ago, Homo erectus, the oldest known early human, was the first to control fire. Others who rely on the presence of stone hearths argue that early humans achieved that control between 1 million and 500,000 years ago.


Whatever the answer, the study's results would support an early start to cooking. It shows that chimps and humans share the same basic cognitive toolkit needed for cooking (although it is not as well developed in chimps). Chimps and humans split from a common ancestor, so the cognitive skills would have been present along the lineage leading to humans. And the chimps in the study quickly learned how to solve cooking-like problems.


"We were not training them," says Alexandra Rosati, an evolutionary anthropologist who is joining the faculty at Harvard University in Cambridge, Mass.


Instead, she and Harvard colleague Felix Warneken were interested to see if chimps were capable of the spontaneous insights needed to solve problems related to cooking.


"If they can solve these problems, it's pretty good evidence that these abilities predated the control of fire," Dr. Rosati says.


Previous studies had revealed chimps' preference for cooked food once they had been introduced to it. Even in the wild, they had been seen quietly observing bush fires, then moving in later to nosh on roasted seeds.


But chimps haven't learned to control fire. And they don't cook in the wild. So the question remained: Do they have the cognitive tools to perform the thought processes needed for cooking?


The basic elements are familiar to anyone who has baked chocolate-chip cookies for themselves or a waiting household: motivation, patience, self-control, distinguishing cause and effect, and an ability to plan.


To tackle the question, Rosati and Dr. Warneken, the research paper's lead author, conducted a suite of nine experiments on 29 chimpanzees at the Tchimpounga Chimpanzee Sanctuary in the Democratic Republic of the Congo.


The chimps' typical diet consisted of fruits and vegetables. The duo used raw and cooked slices of white sweet potato, also on the chimps' sanctuary menu, for the experiments.


The duo confirmed previous work that chimps have a innate preference for cooked slices and found that this held even if the slices were barely cooked.


They also tested for patience among 16 of the 29 chimps.


Each chimp was presented with four slices, divided into a one-slice serving and a three-slice serving. Initially, each chimp learned that it could receive the one slice immediately if it selected it. If they picked the trio, they would have to wait one minute to receive it.


Then came the mixing and matching with cooked and uncooked slices. The duo found that that chimps generally tended to eat one raw slice immediately rather than wait to eat three raw slices a minute later. But the chimps showed a greater tendency to refuse the raw chip and wait if the three slices remaining were cooked.


The next step was to give the chimps a problem "that emulates cooking but we know they've never seen before,"  Rosati says.


The chimps preferred showed a clear preference for the "cooking" device in ways that showed that they understood that something happened to the potato slice they deposited in it.


The key question: Would they readily entrust their food to the device, in order to "cook" it, rather than just eating the slice while they had it in their hand?


"We thought that this was going to be a really challenging problem," she says, because animals tend to be loath to yield up food that is in their control.


In additional tests, the researchers found that the chimps would place only raw food in the cooking devices, not partially cooked food or something inedible, like a twig. And the chimps behaved the same with carrots, as well as the sweet potatoes.


They also demonstrated a willingness to refrain from eating the raw slices quickly if they saw they had an opportunity to use the faux cookers to "cook" their slices.


If chimps have the cognitive ability to solve-cooking related problems, why don't they cook? An inability to control fire is just the beginning, the duo notes. Chimpanzee diets in the wild typically don't include tubers or roots, which are harder to chew and digest raw than fruits and other foods they eat.


Another factor, which the two are interested in exploring, may hinge on social factors. For people, cooking often is a highly social activity with ample opportunity for attempts at theft.


"But even though there's this risk of theft, people are quite tolerant and seem to be happy to engage in a social way" when cooking, she says, whether one looks at traditional cultures or at a modern Thanksgiving pot luck dinner.


The same level of socialization and willingness to share food isn't seen in chimpanzees in the wild or in captivity.


One test would be to give the chimps in the study food and see if they would still put it in the device if other chimps were with them, Rosati says.