And we have a new more expensive methodology to replace chemo.  At least it appears to behave better than work by destroying your imune system just because we can.

What is important is that Chemo is going to be abandoned and considering that it at best adds a brief time addition to the prognosis, anything is likely to be a better approach.  How about simply accepting inevitable death with the minimum pain?  That is an option rarely explored and certainly not promoted by any doctor.

At the end of the day you will be sent home to  contemplate the inevitable regardless.

I know cancer survivors.  The cancers were incurable.  None did it with Chemo.

Immunotherapy, which harnesses the body's immune system to attack cancerous cells, is proving so effective that in one British-led trial, more than half of patients with advanced melanoma saw tumours shrink or being brought under control, researchers said.

A number of trials of the drugs have been presented at the American Society of Clinical Oncology's annual conference in Chicago.

Professor Roy Herbst, chief of medical oncology at Yale Cancer Centre in the US, described some of the findings as "spectacular".

He said immunotherapy could replace chemotherapy as the standard treatment for cancer within the next five years, according to reports.

He told reporters: "I think we are seeing a paradigm shift in the way oncology is being treated.

"The potential for long-term survival, effective cure, is definitely there."

The combination of nivolumab and ipilimumab significantly increased progression-free survival (PFS) for patients with advanced melanoma compared with ipilimumab alone, according to a randomized, double-blind, phase III trial (Abstract LBA1). Nivolumab monotherapy also performed better than ipilimumab alone. Though this was a positive trial, a Discussant also noted the extreme high costs of these drugs, and others like them.

* The prospective, nonrandomized TAPUR clinical trial will collect information on the antitumor activity and toxicity of commercially available targeted cancer drugs in a range of cancer types (including advanced solid tumors, multiple myeloma, and B-cell non-Hodgkin lymphoma) with a genomic variation known to be a drug target. At launch, TAPUR will evaluate 10-15 drugs contributed by 5 pharmaceutical companies, with cohorts of up to 24 patients defined by tumor type, genomic abnormality, and drug. Patient enrollment is expected to open before the end of the year.

* The phase II NCI-MATCH trial will incorporate more than 20 different study drugs or drug combinations, each targeting a specific gene mutation, in order to match each patient in the trial with a therapy that targets a molecular abnormality in their tumor. Ten initial substudies are planned for the trial’s launch (Table 1), increasing to 20 or more within months. Patient enrollment will open in July 2015. 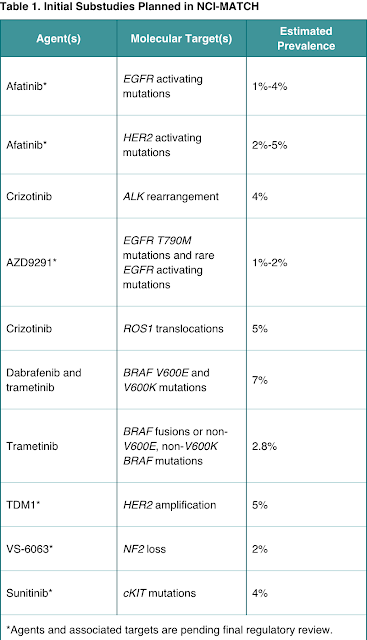 Trial investigators plan to screen at least 3,000 patients during the full course of the trial with the goal of enrolling approximately 1,000 patients in the various treatment arms (with up to 35 patients each). The trial’s design calls for at least one-quarter of the enrolled patients to have rare cancers (defined as cancers other than non–small cell lung, prostate, breast, or colon cancers).

The combination of nivolumab and ipilimumab significantly increased progression-free survival (PFS) for patients with advanced melanoma compared with ipilimumab alone, according to a randomized, double-blind, phase III trial (Abstract LBA1). Nivolumab monotherapy also performed better than ipilimumab alone. Though this was a positive trial, a Discussant also noted the extreme high costs of these drugs, and others like them.

“The immune system is regulated by a dynamic interplay of positive and negative signaling pathways,” Dr. Wolchok said. Both the individual drugs have yielded improvements in survival in melanoma, and preclinical and earlier stage studies have indicated a synergistic effect with the combination.

In the group receiving combination therapy, 36.4% of patients discontinued treatment because of adverse events. The majority of these patients (67.5%) still experienced a response; 50% of these responses occurred after treatment discontinuation. Dr. Wolchok pointed out that there were no treatment-related deaths in the combination arm of the study, although it was carried out at 137 sites globally.

Discussant Michael B. Atkins, MD, of Georgetown University Medical Center, described this as another “breakthrough” in melanoma therapy. Given these results and results of an earlier study comparing pembrolizumab and ipilimumab, he said, nivolumab monotherapy and in combination with ipilimumab—along with pembrolizumab—should be considered new standards of care for advanced melanoma.

Though the efficacy of these regimens is clear in this study, their value in terms of cost and associated benefits is still in question, according to Leonard Saltz, MD, of Memorial Sloan Kettering Cancer Center, who discussed “Perspectives on Value” during the Plenary Session. He noted that current prices for nivolumab and ipilimumab—$28.78 per mg and $157.46 per mg, respectively—push the total cost of the regimen in the CheckMate 067 trial into the hundreds of thousands of dollars. The price of ipilimumab, Dr. Saltz said, is “approximately 4,000 times the cost of gold.”

This reflects a decades-long trend in rising oncology drug costs, a trend that Dr. Saltz called “unsustainable.” He said that the rising costs of these drugs do not reflect development costs, nor do they help drive innovation. “Cancer drug prices are not related to the value of the drug, rather the prices are based on what has come before, and what the seller believes the market will bear.”

He said that the U.S. Food and Drug Administration’s inability to consider costs and the Centers for Medicare and Medicaid Services’ inability to negotiate those costs with drug companies is contributing to the problem. To begin to change this, Dr. Saltz said, the community must start by acknowledging there is an upper limit to what we pay to treat each patient with cancer. “It’s a very unpleasant discussion. It’s very uncomfortable,” but it is a necessary one to have, he said.

Watch the session: Visit the ASCO Virtual Meeting website.
Posted by arclein at 12:00 AM