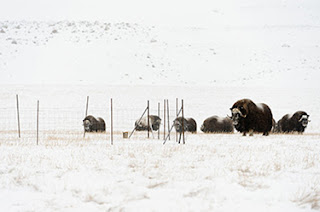 A full global restoration of muskox herds is to be deeply desired and i suspect inevitable. We are barely hunting them now and it makes excellent sense to begin herding them.   We learn here that they are instrumental in breaking up the moss problem and possibly eating it as well.  Certainly raindeer will eat the moss.


Add in healthy wolf populations and careful husbandry and we can produce an annual fleece which is superior and a  significant meat and by product supply as well. combined with reindeer herding and we have a significant economic base for a large population of folks living in the north.  This should be pursued as a major initiative.


Plant products also exist here but that needs manpower and it is difficult to generate margins though temporary labor is easily moved in and out during the summer time..


Animals graze around half the land on Earth, affecting the plants that grow there, the soil, and the carbon sink. Now, a team from Lund University, Sweden, and Aarhus University in Denmark has found that excluding muskox (Ovibos moschatus) from mires in Greenland reduces their carbon uptake but increases their methane emissions.

"Arctic ecosystems are of vital importance for global carbon storage, and changes in these ecosystems may cause significant feedbacks to global climate," Julie Maria Falk, who carried out the study while at Lund University, Sweden, told environmentalresearchweb. "The muskox is the only large herbivore in high Arctic Greenland, and consumes large amounts of plant forage. This is likely to impact vegetation composition and productivity, and ultimately affect the carbon balance of especially wet, productive areas where the animals aggregate to forage."
Falk and colleagues excluded muskox from grazing at five, 10 m2 fenced enclosures on mire in Greenland's Zackenberg valley, from 2010 to 2013. In the summer there are typically around 1–2 muskox per km2 in the area; by late summer and autumn, this has risen to around seven animals per km2. Muskox densities at Zackenberg are among the highest observed in the Arctic, Falk said, as shown by the BioBasis monitoring programme.
"Very few have studied how grazing and trampling by large herbivores affects the carbon balance, especially when looking in high Arctic wet habitats," Falk said. "Even fewer have looked at how the emission of the important greenhouse-gas methane from the terrestrial environment is influenced by the grazing and trampling of large herbivores."
Falk and colleagues found that in 2013, after three years of muskox exclusion, the ecosystem took up 47% less carbon dioxide and emitted 44% less methane. These plots also showed a 33–44% decrease in the total number of vascular plants, a 51–53% drop in the number of Eriophorum scheuchzeri (a sedge) tillers, and an increase in the moss layer and amount of litter.
"Almost four million people live in the Arctic today, and the area contains many species, habitats, ecological processes and adaptations that are unique," said Falk. "The high uncertainty of long-term climate forecasts makes it important to provide Arctic communities with a broad suite of tools to help them respond to a changing environment."
The team believes the findings increase our understanding of the complexity of carbon balance and the importance of considering the effects of key species such as large herbivore grazers. "Our results can additionally be used for model validation and increased parameterization of process-based dynamic global vegetation models," said Falk. This could improve our understanding of how wetland ecosystems within the Arctic may respond to simultaneous grazing and climate change. "Other studies have shown that the consequences of warming on tundra carbon balance is determined by reindeer grazing history, and that high grazing can mitigate the effects of warming on the ecosystem carbon balance," she added.
In an earlier study in the Zackenberg valley, the team tested what would happen if grazing pressure from muskox increased, by clipping away vegetation. Both methane emission and carbon uptake decreased substantially, probably because the density of vascular plants went down.
"We were expecting an [increase] in the vegetation growth when the large grazers were removed," said Falk. "However, to our surprise we found that the density of vascular plants had decreased like in our other experiment; this was mostly due to [the fact] that the moss layer had increased, as they are very sensitive towards trampling. A thicker moss layer often limits the growth of vascular plants. Consequently, both increased and decreased grazing pressure results in a decrease in carbon uptake and methane emission."
Now, the researchers will continue to monitor the effects of increased simulated grazing and exclusion of muskox on the vegetation development and greenhouse-gas balance of the ecosystem. "Besides studying the carbon balance, we are also looking into a number of related aspects of the plant-muskox interaction – how muskox foraging affects the phenology, productivity and nitrogen allocation in the fen areas, and how access to the productive fen areas is impacting the population dynamics of muskoxen," said Falk, "[because] the more time to forage in the productive fen before the snow arrives, the fatter they are when entering winter, and the bigger the chance for successful reproduction."
The team reported the findings in Environmental Research Letters (ERL).
Posted by arclein at 12:00 AM