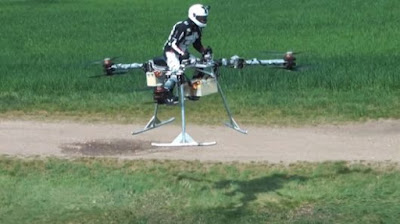 Inexpensive electric rotors will allow for a lot of aeronautical innovation and this is a great example.

Think in terms of a multiseat array been opened forward while the rotor are set up forward on either wing position with a balancing rotor on the tail.  Now add in axis rotation to all three rotors as well and let as computer control it all as it is far to complex for human intervention..

The defaults will still have to auto-rotate to allow a successful descent been possible.  Otherwise it will never be deemed airworthy.   And by the way i would never fly that machine you see.  One failure and you will somersault all over the country and it will not be survivable.
I strongly suggest that they put a remote system on board forthwith and master power off scenarios.

The Flike concept demonstrator in a controlled flight in Hungary

Despite always generating plenty of interest, getting a personal flight vehicle off the ground can be a huge undertaking – just ask Malloy Aeronautics, which has been forced to scale its Hoverbike down, selling a one-third-scale drone to raise funds to continue development of the larger, manned Hoverbike. But a Hungarian team is looking onwards and upwards after having achieved the first manned flight of its Flike tricopter concept demonstrator.

In under a year, the team of flight enthusiasts at Bay Zoltan Nonprofit Ltd., a state-owned applied research institute in Hungary, has taken the concept of a personal flight tricopter from the drawing board to its first manned flight at Miskolc Airfield in northeast Hungary on March 7.

On the manned flight, the Flike (think fly-bike) concept demonstrator had a takeoff weight of 210 kg (463 lb) and only made it off the ground for a few seconds, but took off and landed safely. In a subsequent manned test flight, the Flike fly meters off the ground, and was able to demonstrate hovering and maneuvering capabilities while compensating for wind in a controlled flight lasting one and a half minutes.

The aircraft demonstrator features a Y6 layout, with six rotors paired in a coaxial arrangement that are directly driven by individual electric disc motors. These are powered by lithium polymer batteries, which the team says allow for around 15 to 20 minutes of hover flight or 30 to 40 minutes of cruise flight.

Control is provided by altering the rotation speed of the individual rotors, allowing the Flike to perform in the air like a conventional helicopter, including the ability to hover, roll, bank, drift, yaw, climb, turn, sidle and dive. The team also hints at other flight capabilities that are "yet to be named".


Thanks to its flight management computer that takes care of the craft's stability, lateral position and altitude, the development team claims flying the Flike will be as easy as riding a bike. They also claim the Flike is able to provide emergency lift to prevent a crash if one of the electric motors fails.

Having successfully completed the first flight, the team now plans to build a second prototype that would boast a similar design and features to that envisioned for the planned commercial model. And commercialization is the ultimate goal, with the team aiming to spin off into a startup company for which it is actively seeking investors.

Videos of the first flight and subsequent controlled flight can be viewed below.