The key word is continuous.  From there costs can only go down and continuous chip manufacture becomes plausible as well.

Even better such a ribbon can be woven around a spindle to produce a tube cable whose strength could be astounding.  Better it is no trick to scale tubes inside tubes to form a thick layered tube cable.  Epoxy may even be used to lock it all together as well.


All this could produce an effective space cable able to be tethered on Earth.  It just stopped been impossible eve if we never build it.
..

MIT mechanical engineering Associate Professor A. John Hart says the new roll-to-roll manufacturing process described by his team addresses the fact that for many proposed applications of graphene and other 2-D materials to be practical, “you’re going to need to make acres of it, repeatedly and in a cost-effective manner.”

Because a continuous process eliminates the need to stop and start to load and unload materials from a fixed vacuum chamber, as in today’s processing methods, it could lead to significant scale-up of production. That could finally unleash applications for graphene, which has unique electronic and optical properties and is one of the strongest materials known.

The new process is an adaptation of a chemical vapor deposition method already used at MIT and elsewhere to make graphene — using a small vacuum chamber into which a vapor containing carbon reacts on a horizontal substrate, such as a copper foil. The new system uses a similar vapor chemistry, but the chamber is in the form of two concentric tubes, one inside the other, and the substrate is a thin ribbon of copper that slides smoothly over the inner tube.


Gases flow into the tubes and are released through precisely placed holes, allowing for the substrate to be exposed to two mixtures of gases sequentially. The first region is called an annealing region, used to prepare the surface of the substrate; the second region is the growth zone, where the graphene is formed on the ribbon. The chamber is heated to approximately 1,000 degrees Celsius to perform the reaction.

The researchers have designed and built a lab-scale version of the system, and found that when the ribbon is moved through at a rate of 25 millimeters (1 inch) per minute [100 feet per day if the system ran non-stop], a very uniform, high-quality single layer of graphene is created. When rolled 20 times faster [2000 feet per day if run non-stop], it still produces a coating, but the graphene is of lower quality, with more defects. 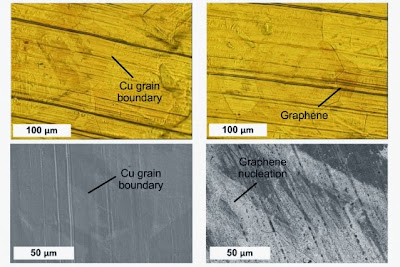 Copper substrate is shown in the process of being coated with graphene. At left, the process begins by treating the copper surface, and, at right, the graphene layer is beginning to form. Upper images are taken using visible light microscopy, and lower images using a scanning electron microscope. Courtesy of the researchers

Some potential applications, such as filtration membranes, may require very high-quality graphene, but other applications, such as thin-film heaters may work well enough with lower-quality sheets, says Hart, who is the Mitsui Career Development Associate Professor in Contemporary Technology at MIT.

So far, the new system produces graphene that is “not quite [equal to] the best that can be done by batch processing,” Hart says — but “to our knowledge, it’s still at least as good” as what’s been produced by other continuous processes. Further work on details such as pretreatment of the substrate to remove unwanted surface defects could lead to improvements in the quality of the resulting graphene sheets, he says.

The team is studying these details, Hart adds, and learning about tradeoffs that can inform the selection of process conditions for specific applications, such as between higher production rate and graphene quality. Then, he says, “The next step is to understand how to push the limits, to get it 10 times faster or more.”

Hart says that while this study focuses on graphene, the machine could be adapted to continuously manufacture other two-dimensional materials, or even to growing arrays of carbon nanotubes, which his group is also studying.
Posted by arclein at 12:00 AM