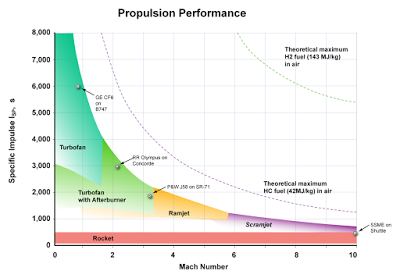 This is unexpected, but scramjet work is moving forward. It is the only convenional way in which an aircraft can really fly into space.

At least in theory and we are pushing those limits here.

Australia's DSTO has been doing hypersonic experiments in Woomera, South Australia and Norway. In 2018, it plans to launch a glider with an air-breathing scramjet engine that will cruise at hypersonic speeds to travel about 200 kilometres in 30 seconds (mach 20).

“Hypersonics research is not new; it’s been conducted for 30 or 40 years. But the way the DSTO conducts its work is quite different in terms of experimentation. So we are effectively taking an IT approach. These experimentations would not be possible without IT systems. The whole payload is instrumented with IT systems,” Zelinsky said.

Sensors attached to the air-breathing engine measure the aerodynamic and thermodynamic properties in real time, which is gathered and analysed for insight into how the DSTO should shape its next experiment and to progressively advance the technology each time.

“We use telemetry, which is radio communications, a little antenna dish tracking this vehicle as this 2-stage rocket goes up into space, turns around and comes back down. We are tracking and communicating all the time and getting the megabits of data that are associated with this platform.”

That height above the Earth’s surface is where density of air is right to sustain hypersonic propulsion and flight without burning up. The ‘angle of attack’ means carefully aligning the vehicle to its target, because it could end up somewhere else even if it’s a few degrees out, Zelnsky said.

“When it gets to the 20-30 kilometres above the Earth’s surface, we use gravity to accelerate the vehicle to hypersonic speed. What we are doing is we are shooting the vehicle up very high up in the Earth, turning it around and then it just starts accelerating through gravity to get to that Mach 5 to Mach 10 speeds.

For a scramjet, the kinetic energy of the freestream air entering the scramjet engine is large comparable to the energy released by the reaction of the oxygen content of the air with a fuel (say hydrogen). Thus the heat released from combustion at Mach 25 is around 10% of the total enthalpy of the working fluid. Depending on the fuel, the kinetic energy of the air and the potential combustion heat release will be equal at around Mach 8. Thus the design of a scramjet engine is as much about minimizing drag as maximizing thrust.