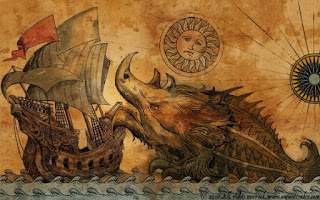 This is a remarkable report because it is about an actual attack as well.  Better yet, although all reports are likely lost,  telling this story at home base would trigger a serious investigation that would inspect the damage and confirm the nature of the attack itself.  We can not ask for a better quality for reports of this nature.

We continue to tentatively identify all such sightings as that of a Mososaur and it is the unusual head that provides confirmation.  At the same time it is easy to understand that most of the time such a sighting would be identified as a shark or some form of killer whale.  We do have a dorsal fin and we even have a white belly.

The creature is generally common in these seas at least and has been seen and simply misidentified.  Unlike the whale, it can also avoid attack by going to the deep and simply staying there.  You can also be sure that after this event, this creature avoided all surface boats.  It is also likely that prior attacks saw the boats sunk and the crew hunted and eaten.

Sea Monster Attack
/
http://mysteriousuniverse.org/2014/03/pacific-war-mysteries-part-1-of-2
The sea had its own share of mysteries during the Pacific War. In addition to numerous sightings of sea serpents throughout the war, there is at least one instance of a ship actually being attacked by some kind of sea monster.

The crew aboard one Japanese scout ship were surprised during one night time mission by something they could not readily explain. One crewman described how a surge of water erupted near the vessel, after which the boat was jolted by something ramming the hull. Other crewmen arrived and saw what appeared to a large grey shape in the water at least 50 feet long with a white underbelly, leathery skin, prominent dorsal fin, and what was described as “the head of an alligator.”

The creature would ram the vessel, circle back, then ram it again. It got to the point where the bone jarring impacts caused the boat to list to starboard, upon which the shocked and panicked crew opened fire, finally sending whatever it was that had attacked them back into the depths from which it came. There was so much damage to their ship that they were forced to abandon their mission and go back for repairs.
Posted by arclein at 12:00 AM

its probably a sort of shark, what makes you say it was a 'sea monster'.