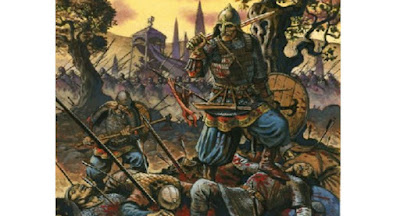 There is one truth long forgotten by western historians and it needs to be revisited.  It is that the Byzantium state was an intact christian civilization from the fall of the western roman world which was complete through essentially the discovery of America and the route to India.  Those discoveries ended its economic foundation and it withered to be knocked off by the Turks although the Turks got there mid fifteenth century and it can be argued that that threat fueled the search for alternative routes.

While it was intact, it was the richests state in the western world and the Islamic world for that matter.   Thus it led in military innovation.  Not only did they tap the viking culture for their Varangian Guards they essentially perfected the armored heavy calvary in the first place that soon became the standard in Europe as knighthood.  They were always the ones able to pay for the largest army and the best army.

The Roman Empire did not die when the legion became obsolete.

So the Varangians were important and this item covers their history.

The Varangian Guard: Berserkers of the Byzantine Empire

Vikings in Byzantium: The Varangians and their Fearless Conquests

It is relatively well known that the Vikings were some of history's greatest travelers, traders, and mercenaries.  Their reach extended far, as they are credited with finding North America and Greenland, their names drove fear into the hearts of many European mainlanders.  What is sometimes less known, however, is exactly how far the arm of the Vikings reached.  In actuality, their culture stretched as far east as Turkey and Russia, culminating in their direct influence in the creation of the Kievan State of Rus', lasting well into the thirteenth century.


According to the Russian Primary Chronicle, one of the foremost texts documenting the Viking influence on Russia, the Varangians—as dubbed by the Greeks and Eastern Slavs—settled in Ladoga, Russia in the mid-750s, and then later in the nearby Novgorod.  Not unlike the tracks of the Scandinavian Vikings, their settlements were not initially peaceful as they demanded tribute from the people they had conquered, the Baltic Finns and the Slavs.  Because of this, they were initially driven out of Novgorod for a period of time.  However, the intriguing twist is that the Finns and Slavs soon began to appreciate the regulations the Varangians had brought to their community and so the Varangians were begged to come back and bring those same regulations with them.  It was then that the leadership of Rurik (830-870), from whom a Russian lineage extends, was first recorded.

\
Rurik's cousin Oleg was responsible for expanding the Varangians from Novgorod further south, eventually capturing Kiev in 882 and forging a seat of Varangian power there.  That seat became the capital of a federation of Slavic states, dubbed the Kievan State of Rus'.  Following Oleg, Vladimir the Great's reign saw the introduction of Christianity to the Varangians and their subsequent conversion.  Rurik and Oleg's descendants continued to remain in charge of the Kievan State, eventually leading to the foundation of the Tsardom of Russia.

The Baptism and Christianization of Kievans, a painting by Klavdiy Lebedev. Painted Prior to 1916. (Wikimedia Commons)

Now, it is no surprise that the Varangians were as aggressive as their northern predecessors.  While the named Vikings' desire was to expand their land and wealth across the Atlantic and down into England, one of the main priorities of the Varangians was obtaining the untapped riches of the eastern world.  They were so forceful and persistent that they intentionally started wars with the people of Byzantium so that they could pilfer in the event of their victory.


The Varangians were a force to be reckoned with because they controlled the two main trades from the east to the west.  The Volga Trade was a ninth century route connecting Northern Russia, known to the Varangians as Gardariki, and the Middle East, called Serkland.  The trade route was known for transferring goods and wealth from the Baltic Sea to the Caspian Sea, and remained the primary form of transportation and trade until the eleventh century decline in silver.  At this time, the Dnieper Route, stretching from the Black Sea to the capital of Byzanitum, Constantinople, took its place, as its directness to the capital provided protection from the Turks.


When the Viking Age ended, the east saw a conclusion to the influx of Scandinavians to their region, and the Varangians began to assimilate and intermarry with the natives.  By the time of the fall of Kievan Rus' in 1240 at the hands of the Mongols, the Varangians became relatively indistinguishable from the native Slavs.  Despite this fusion of ethnicities, it is important to create a distinction between the Vikings and the Varangians for a better understanding of their impact on the history of Russia.


Featured Image: The Invitation of the Varangians: Rurik and his brothers Sineus and Truvor arrive at the lands of the Ilmen Slavs at Staraya Ladoga. Painted prior to 1913 by Viktor.M.Vasnetsov. (Wikimedia Commons)
Read Part 2 – The Varangian Guard: Berserkers of the Byzantine Empire
By Robin Whitlock

The tale of the Varangians continues in its prime in the form of the Varangian Guard, a prominent and selective Byzantine army arising in the tenth century.  Composed of the Scandinavian marauders in the beginning, the Varangian Guard survived until the thirteenth or fourteenth centuries as the Byzantine Emperor's elite sentinel.  Dressed in battle armor of blue tunics and crimson cloaks, with man-high battle axes gilded with gold, the bright colors of the Varangian Guard did nothing to quell the terrible berserking power, which they laid against all those who threatened their Byzantine leader. (Berserkers were Old Norse warriors who fought as unchecked, frenzied shock troops who, when deployed, appeared so mad that neither "fire nor iron" frightened them.)


Much of what is known about the Varangian Guard comes down through the centuries from scholars such as Princess Anna Komnene, daughter of Emperor Alexios I, and Michael Psellos, a monk from Constantinople—both writing in the eleventh century AD.  It is believed that the Varangian Guard had been formed around the year 874 when a treaty between the Rus' and Byzantine Empire dictated that the Rus' had to send warriors to the aid of the Empire as necessary.

Though it was initially a forced military draft, the practice later became voluntary, undoubtedly in part to ensure the Varangians did not revolt against their new Byzantine leaders.  However, it was not hard to keep the foreign warriors working in the Empire, as the Empire reportedly treated the Varangians far more generously than the leaders of Rus', who tended to withhold payments and ignore promises of land and status.


It was Emperor Basil II, also known as Basil Porphyrogenitus, who truly brought the Varangians to the forefront of Byzantine culture in the tenth century.  Born of Macedonian stock, Basil II reigned from 976 to 1025, and is in large part remembered for stabilizing the eastern empire against foreign threats.  The stabilization, however, was in large part due to Varangian aid, given to him by Vladimir I of the Kievan Rus', and cemented because of Vladimir's marriage to Basil's own sister, Anna.  With this wedding, the Varangian forces became a interchangeable unit between Rus' and the Byzantine Empire, and they were uniquely tied for as long as the Empire remained. This is how the Varangians became Christianized (see Part 1).  Part of Basil's agreement to allow Vladimir to wed his sister was that Vladimir had to accept Anna's religion.  Thus, Vladimir was baptized and Rus' was Christianized not long after.


Initially, the Varangian Guard was utilized as extra fighting power in skirmishes between Byzantium and some of her eastern foes.  However, as history shows, with usurpers such as Basil II's own namesake Basil I, the native protectors of the city and of the Emperor could easily be swayed to shift loyalties.


Thus Emperor Basil II came to actually trust the Varangians more than his own people, and they were therefore given a more critical role in his armed forces.  Princess Anna even notes in her work The Alexiad, the Varangians were uniquely known for their loyalty to the ruling emperor. (This is in reference to her father's own seizing of the Byzantine throne).  Eventually, they became the personal protectors of the emperor himself: an elite, close knit force that remained near the emperor's side at all times.  Accompanying him to festivals and parties, religious activities and private affairs, the Guard remained at all times close to the emperor and his family.  They were the guardians of his bedchambers in the evenings, remaining barracked within the palace to ensure they were always nearby, and went so far as to provide crowd control at illustrious gatherings to ensure the emperor was always protected and always had a way to escape.

Basil II was known as the Bulgar Slayer, is depicted in full armor at the Georgian Camp,


Within a short time, it became quite a prestigious endeavor to be one of the emperor's elite defenders.  Though initially comprised of Scandinavian descendants, the Varangian Guard grew over the years to include most of the races of the British Isles: Anglo-Saxons, Irishmen, Scotsmen, etc.  A fee of seven to sixteen pounds of gold was charged to allow entrance into the army, oftentimes on a loan basis from the Byzantine emperor himself.  The warriors then quickly repaid their debt with the large salary they were provided for their services, on top of the booty they were allowed to take after the success of decisive battles.  Furthermore, modern author Lars Magnar Enoksen claimed that, upon the death of each Byzantine Emperor, it was customary for the Varangians to pillage the palace treasury in an Old Norse rite.  This act made the warriors even wealthier, and in showing off this wealth to their own families, many other Scandinavians were eager to pay the fee to become part of the Guard.


The unyielding protection they provided their emperors helped prevented the vicious usurpations that had plagued the Roman Empire that preceded them.  Though even this defense eventually came to an end with the Fourth Crusade's siege of Constantinople in the year 1204 AD, the Varangians survived long beyond their Viking ancestors as a strong, elite force, rich in both wealth, as well as power.

The fall of Constantinople in 1204. Painting of Mehmed II and the Ottoman Army approaching Constantinople with a giant bombard, by Fausto Zonaro. (Wikpedia)