Stalked By A Sasquatch 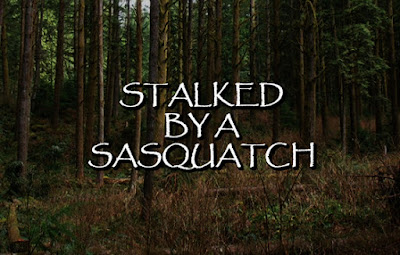 It is Sasquatch country here but this was no Sasquatch.   We got the smell and a glimpse of something that is slender.  Not a Sasquatch, but conforming to the Giant Sloth.  We have had the smell before in this country and i even know the locale.

The stalking could well have been an effort to herd them away and the low noise level also conforms to other likely sloth sightings.  Recall that in this country it is hard to move quietly at all.  As reported here bears are much noisier.

Stalked By A Sasquatch

My dad and I were hiking back in late November 2005, in a place called the UBC Research Forest north of Pitt Meadows, BC, Canada (about thirty miles east and a bit north of Vancouver, Canada). It's on the edge of the mountains, with several logging roads and trails. Anyway the day was already getting late when we headed out, the weather horrible. No wind but there were showers with hail and slush. We were the only people in the area hiking (parking lot was empty both when we arrived and left). So after about an hour of hiking randomly up logging roads and trails we were a good several miles into the "area" when we take a break by a small stream in a small gully.

Anyway, we smell this horrible scent (sort of skunkish, with a human and fish scent mixed in). Neither of us has ever smelled anything like this before and we both have encountered every large animals out here on the coast. Because there was no wind, we knew it was close.

So we keep going along this hillside. Above us, at about fifty feet, is an old overgrown logging slash. below us, a thickly wooded slope (could see maybe a hundred feet down the slope). We get this feeling we are being followed, the forest becomes too silent. Even the local ravens didn't make a sound.

We smell this scent two more times, now stronger. So we begin hiking faster. As we come out of a small gully we hear a crash. Spinning around we race back to the crest and look back down. Something large and tall (easily taller than my dad who is six foot), disappears into the bush. We just catch a glimpse of a dark brown mass. Neither of us is armed, so we continue on at full pace, knowing there is a logging road ahead.

Again we smell this weird odor. We heard noises from the old logging meadow above us. Whatever this thing is, it's moving VERY silently. Yet the odd time it would break a branch or bump a small tree. I've been followed by bear and cat before, neither moved like this. It was way too silent to be either (just for the record, Grizzlies aren't in this area but I have encountered them before too.) After we round a bend in the slope, we hear movement again. It was on the lower side of us now, or so it seemed.

[They are been stalked by the master stalker - arclein]

After another few minutes we hear it again (and smell it). Now it was moving on the upper side of us, just over a low ridge (maybe a hundred feet away). By now we can see the logging road a hundred or two hundred feet ahead. Then this thing let out a cry...it sent a shiver down my spine. My dad (who I have never seen afraid before except the one time I was near death, another story, went cold). It sounded the cross between a 'whoop', a human, and something unknown. It lasted for about five seconds. We turned and ran to the road.

Running down the road we pass a junction and continue heading south. I dropped something a few seconds later (about two hundred feet past the junction). I stop, turn, and pick it up. Up amongst the trees something tall and dark ducked out of sight. What it was, I haven't a clue. But it was tall and fairly slim....it was too dark to really tell what it was (getting close to dark). So we run back to the parking lot...

Unfortunately it snowed the next day (several inches) otherwise we would have gone back and searched for evidence of this occurrence. This is the only time I have ever been scared in the woods. - AT
Posted by arclein at 12:00 AM