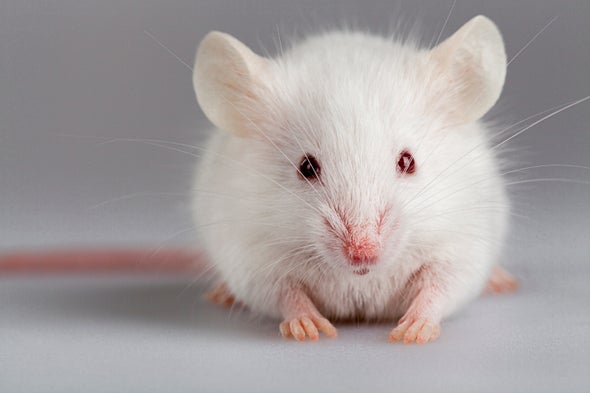 Really interesting in terms of technical potential.  This could be valuable to simply improve night vision in natural conditions.  We are hopelessly blind in any real forest and that is were we want this.

I once kept a path simply because crushed forest soils caused by feet on the pathway, produced bio luminescence.  Slightly green also.  Noe seeing a human been as well would be helpful.

The other end of the spectrum may also work as well as this is the one that allows us to detect spirit bodies.

What this does not need is a mass of hardware..

Researchers Enable “Super Mice” to See Near-Infrared Light
Nanoscale devices convert near-infrared light into visible, green light. When injected into the eyes, they enabled mice to see in the infrared

With an injection of nanoscale devices as fine as grains of pollen, two biotechnology researchers have given mice the ability to detect near-infrared light—something long believed possible only for a few animals including certain snakes, insects and bats, along with humans using special equipment. One of the scientists, Gang Han, a biochemist at the University of Massachusetts Medical School, calls the experimental rodents “Super mice.” The team reported their results Thursday in Cell.

The natural eyeballs of mice and humans can only detect photons in wavelengths between 400 and 700 nanometers, a narrow sliver of the electromagnetic spectrum. Shorter or longer wavelengths such as those in the ultraviolet and infrared ranges are generally invisible to both species. The cornea and lens filter out most ultraviolet light whereas infrared light is too weak to activate photoreceptors in our eyes. “This is a physical limit on our visible spectrum,” says Tian Xue, a life sciences professor at the University of Science and Technology of China. “But Gang told me that they [were studying] this unusual material.”

He was referring to so-called photon up-conversion nanomaterials, named for their ability to convert low-energy, invisible photons (including infrared light) into higher-energy, visible bits of light. The key to this function is in the nanomaterials’ composition, says Chris Murray, a materials scientist at the University of Pennsylvania who was not involved in the work. “They are made of a group of elements called rare earth metals,” he says. “One of their fascinating properties is they have very long-lived excitation states.”


When a typical atom absorbs energy (from a colliding photon, for example) some of the electrons whirling around the atom’s nucleus dance in a different, more energetic pattern—but only for a brief moment. Then the electrons quickly fall back to their previous positions, and the atom ejects that stored energy as another photon. For most elements, that moment is measured in billionths of a second.


But for rare earth metals, that excited state can last millionths or even thousandths of a second. That is enough time for another photon to slam into the atom and build up more energy, Murray says. “It’s like someone climbing up the rungs of a slippery ladder,” he adds. Rare earth metals “have a little more ‘traction,’ so you can stay on that second rung long enough for the next wave of energy to take you to the next rung.” This allows rare earth metals to take in multiple low-energy photons—including those in the infrared range—and release that energy as a single, higher-energy photon in the visible range.

When Han told Xue about materials that exploit this property of rare earth metals, the two came up with what Xue calls “a crazy idea—like science fiction.” If these metals could be integrated into an animal’s eyeballs as a nanomaterialmaybe scientists could convert invisible infrared light into visible light—which would pass infrared visual information directly to the retina and create, effectively, cyborg eyes. “We were skeptical it would work,” Xue says. “But it’s good to try.”


Han and Xue built their nanoparticles using two rare earth metals called erbium and ytterbium, along with a protein called ConA. “Ytterbium absorbs the [infrared] light, then transfers that energy to a nearby erbium atom, which emits it as a green light,” Han says. Specifically, the nanomaterial absorbs 980-nanometer near-infrared light (which is relatively close to the red edge of the visible light spectrum). The ConA protein attaches to the particle and helps guide the nanoparticles to light-sensitive cells, or photoreceptors, in the eye. When the nanoparticles enter the eye, the protein causes the nanoparticles to crust onto the photoreceptors’ surfaces like barnacles.

In theory, Han says, that should allow the eye to interpret infrared light as green light, as the nanomaterial fires off a green-light photon that (about half the time) interacts with the eye’s natural photoreceptors. To test if it would allow a mouse to actually see in near-infrared light, Han and Xue ran through every test they could think of. They confirmed the modified photoreceptors sent electrical signals to the brain when interacting with infrared light. They shined infrared light into the modified eyes of mice to see if their pupils would contract—and they did. Unmodified mice did not similarly respond to these tests. “It was pretty clever,” says John Rogers, a biomedical engineer at Northwestern University who did not take part in the research. “The most convincing were a series of behavioral tests.”


In one of these tests, Han and Xue put their modified mice, one by one, into a pool where they would surely drown unless they found a hidden platform. The mice had already been trained to recognize an LED sign, displaying a pattern or shape, placed over this platform. “The mice want to be safe on the platform,” Xue says, so they will swim directly to the sign. So Xue swapped out visible LEDs for invisible, near-infrared ones. Mice without the nanoparticle injection wandered aimlessly in the pool. But the modified ones found the platform immediately. Xue says that sent a chill through him. “We cannot even see the [LED sign] but the mouse swam to the correct screen each time. It was pretty creepy,” Xue says.

That meant the mice could use their near-infrared vision to discern shapes and patterns in the world around them, and could functionally utilize this enhanced ability. Ambient infrared light is always present on Earth’s surface but is potentially most useful to humans at night, when visible light is in short supply. “That’s why humans invented night-vision goggles,” Han says. These devices convert ambient infrared light into visible light on a display, allowing people to see in the dark. Han hopes the team’s new technology might one day achieve a similar purpose. “This is in the eye, so nobody knows you have it,” he says. “You can become a superman.”


That dream is a long way from reality, though, Murray notes. “This ‘science fiction-y’ element that you might be able to endow an organism with augmented capabilities is a fascinating thought,” he says. But, he adds, “it’s a bit contrived. These materials are not that efficient yet.” For one thing, there is not enough ambient infrared light at night for these nanoparticles to create a really coherent image. Also, Xue and Han’s nanoparticles would need to go through a lengthy U.S. Food and Drug Administration approval process before any commercial use in humans. That would include testing them on nonhuman primates and a series of safety trials, all of which could take years.


But Murray can see other potential applications. “Infrared light can travel much deeper into the body to do what you want it to do,” he says. So he speculates these nanoparticles could be used to help activate certain light-sensitive drugs or treatments in places visible light cannot easily reach. Or they could be used to study how visible light interacts with our internal organs. “Shining lights in the body has impacts we don’t fully understand, because there aren’t normal photoreceptors there,” Murray says. “This kind of deep-penetration excitation by infrared is a hot area for these materials now.”
Posted by arclein at 12:00 AM