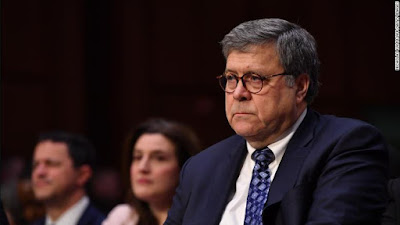 This is of course quite the wish list.  I do think that a lot can be resolved as process as most of the problems were generated to step around process.  Let the FBI complete its own housecleaning and reckoning and ensure political interferance is minimal and certainly not secret.

This is a list that i do think we want to revisit in about 18 months or just before the 2020 election in order to determine progress.  The interesting point will be to see if any proactive changes were made or even found necessary.

Justice truly becomes impossible when the judge is on your side.  Remember that.

Some notable Department of Justice (DOJ) and intelligence community officials have been very vocal with their views on everything from investigations to politics. No doubt the nation’s new attorney general, William Barr, has watched people such as former CIA Director John Brennan, ex-Director of National Intelligence James Clapper (now a CNN analyst), Obama U.S. Ambassador to the U.N. Samantha Power or former national security adviser Susan Rice on cable TV, “60 Minutes” or giving congressional testimony.

Maybe he has read the books written by ex-FBI directors James Comey and Andrew McCabe. And if he follows some of these people on social media, he knows in real time just how they feel and where they come down on current controversies.

But, as he certainly knows, there is always more than one side to a story.

There are many experienced intel officials with a lot to say about what they’ve seen and experienced on the inside. But they don’t have a public platform. They don’t appear on TV. They don’t tweet. Nobody of consequence asks for their advice. And they won’t have the chance to tell Attorney General Barr in person what they think. Yet, they do have some thoughts as to what should be his immediate priorities.

In order for them to be able to speak frankly and without repercussions, they prefer that their names not be made public. Two of them specifically offered that some former intel officials should “go to prison” or “belong in jail” for offenses they have committed. One commented on what he called their “wanton lawlessness and unconstitutional actions.”

What seems important is that these are not the opinions of random, fly-by-night government employees.

So who are they?

Each has decades of intelligence experience working under Democrat and Republican administrations. Their experience includes field agent and managerial positions. They have served in a Cabinet-level office under former President Obama, as an FBI unit chief, as an FBI attorney, as a senior-level CIA official, as a two-star military officer, as an NSA forensics expert and as officers in the Defense Intelligence Agency.

Obviously, Barr is free to factor in or to disregard their comments as he pleases; they are simply the responses provided when asked, “What should be Attorney General Barr’s top priorities?”

Their 21 recommended priorities, some of it in their own words:
Good luck, Mr. Attorney General.
Posted by arclein at 12:00 AM