These Are the World's Healthiest Nations 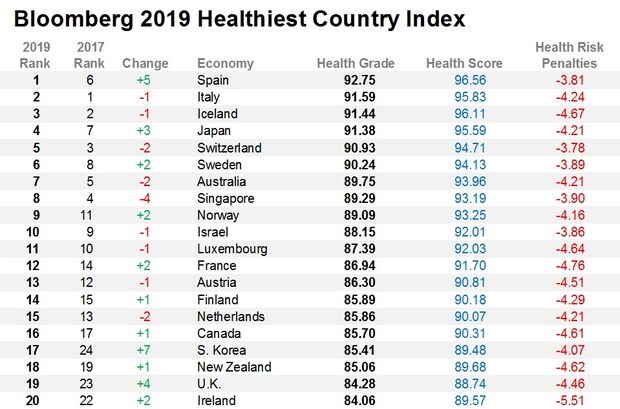 The next thirty years will see a revolution in human health. It is well begun.  Much of it all starts with a rapidly rising awareness of all the things we have gotten wrong and fixing them.

There are various factors of course, but attention to one's health  is the first necessity.  The tools are out there.  I personally work with a Qi Gong trainer to stretch and activate ligaments and that has led to increasing strength, flexibility and endurance arriving naturally rather than been forced.  We use a combination of old knowledge and new hardware.  Throw in attention to D and C and all that  and all is good.  Enough to put me in training for the Camino with my daughter.

Yet that tells you it is not that easy to arrange.  Much of what we know is wrong as well.  Yet the social and economic momentum is on our side now.


These Are the World's Healthiest Nations By

Iceland, Japan, Switzerland round out top five; U.S. is 35th

Maybe it’s something in the gazpacho or paella, as Spain just surpassed Italy to become the world’s healthiest country.

That’s according to the 2019 edition of the Bloomberg Healthiest Country Index, which ranks 169 economies according to factors that contribute to overall health. Spain placed sixth in the previous gauge, published in 2017.

Four additional European nations were among the top 10 in 2019: Iceland (third place), Switzerland (fifth), Sweden (sixth) and Norway (ninth). Japan was the healthiest Asian nation, jumping three places from the 2017 survey into fourth and replacing Singapore, which dropped to eighth. Australia and Israel rounded out the top 10 at seventh and 10th place.

Healthiest Countries in the World

Bloomberg Global Health Index scores for 169 countries, with the top 10 plus U.S. highlighted


The index grades nations based on variables including life expectancy while imposing penalties on risks such as tobacco use and obesity. It also takes into consideration environmental factors including access to clean water and sanitation.

Spain has the highest life expectancy at birth among European Union nations, and trails only Japan and Switzerland globally, United Nations data show. Spain by 2040 is forecast to have the highest lifespan, at almost 86 years, followed by Japan, Singapore and Switzerland, according to the University of Washington’s Institute for Health Metrics and Evaluation.

"Primary care is essentially provided by public providers, specialized family doctors and staff nurses, who provide preventive services to children, women and elderly patients, and acute and chronic care," according to the European Observatory on Health Systems and Policies 2018 review of Spain, noting a decline the past decade in cardiovascular diseases and deaths from cancer.

Researchers say eating habits may provide clues to health levels enjoyed by Spain and Italy, as a “Mediterranean diet, supplemented with extra-virgin olive oil or nuts, had a lower rate of major cardiovascular events than those assigned to a reduced-fat diet,” according to a study led by the University of Navarra Medical School.

Meanwhile in North America, Canada’s 16th-place ranking far surpassed the U.S. and Mexico, both of which dropped slightly to 35th and 53rd. Life expectancy in the U.S. has been trending lower due to deaths from drug overdoses and suicides.

Cuba placed five spots above the U.S., making it the only nation not classified as "high income" by the World Bank to be ranked that high. One reason for the island nation’s success may be its emphasis on preventative care over the U.S. focus on diagnosing and treating illness, the American Bar Association Health Law Section said in a report last year after vising Cuba.

South Korea improved seven spots to 17th while China, home to 1.4 billion people, rose three places to 52nd. Life expectancy in China is on track to surpass the U.S. by 2040, according to the Institute for Health Metrics and Evaluation.

Sub-Saharan economies accounted for 27 of the 30 unhealthiest nations in the ranking. Haiti, Afghanistan and Yemen were the others. Mauritius was the healthiest in Sub-Sahara, placing 74th globally as it had the lowest death rate by communicable diseases in a region still marred by infectious mortality.

Bloomberg evaluated health variables and risks ranging from those of behavioral nature to environmental characteristics. Final index only included nations with at least 0.3 million population and sufficient data. 169 WHO states met the criteria to be included. 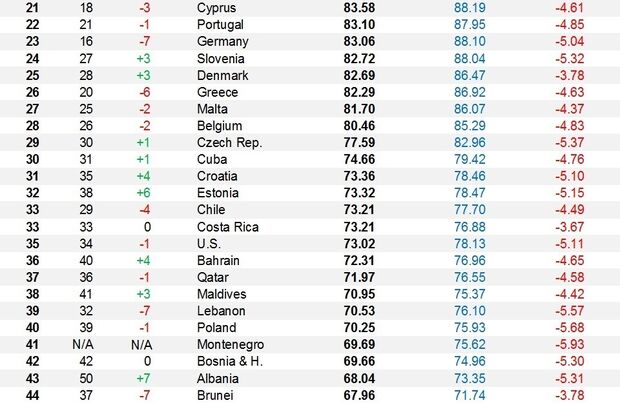 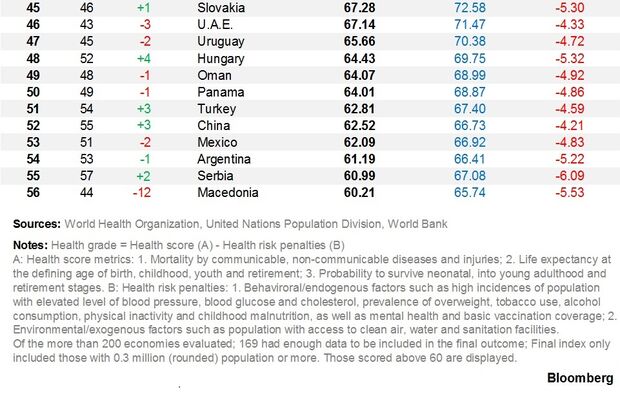 —
With assistance by Dave Merrill

Imran Khan Calls for Talks With India After Jets Shot Down
Posted by arclein at 12:00 AM

I'm not certain that the dismal US showing is due to drug overdoses and suicides as much as it is due to government forced or supported chemtrail sprays, GMO foods, poison vaccines, fluoride water supplies, constant military wars of expansion overseas, local police killings of civilians, lousy diet caused by the wealth being taken from the people, plethora of wars on nouns (war on drugs, war on terror, etc.). Yes, life and good health in America is on a downward spiral while all the zio-american crimes syndicate (aka central government, Comrade) can think about doing is killing people and blowing things up. The great destroyers are killing what was once the 'shining city on the hill.' Sad, really.